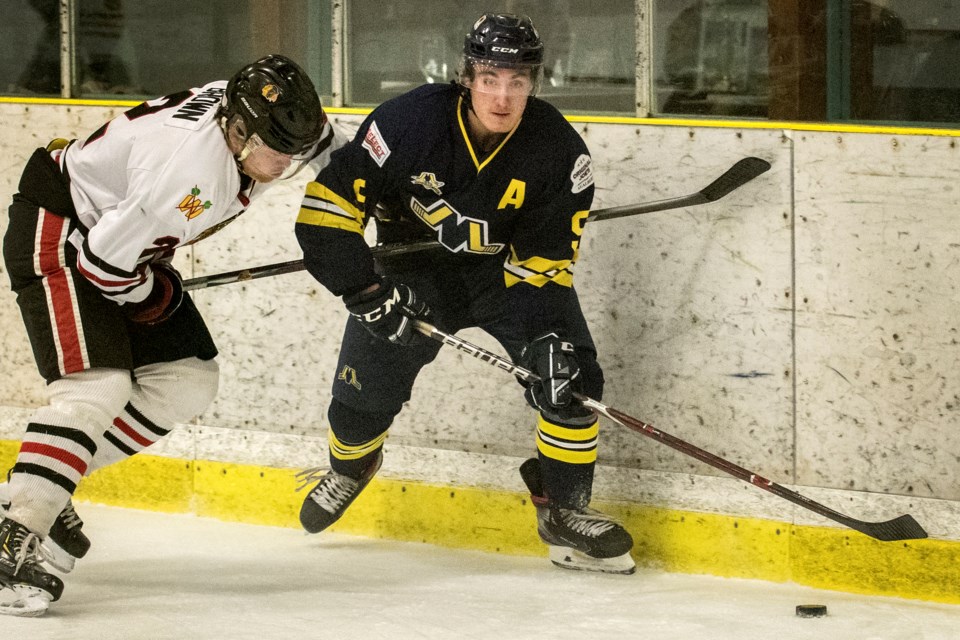 CLOSE ENCOUNTER – Josh Antunes of the St. Albert Merchants and Haydon Brown of the Beverly Warriors tangle along the boards in Capital Junior B Hockey League action last Friday at Jarome Iginla Arena. The Merchants defeated Beverly (14-3), the defending CJHL champion, 8-6. The sixth win in a row and ninth in 10 games for the Merchants (11-5) was 3-2 against the North Edmonton Red Wings (11-4-1) Wednesday at Londonderry Arena. Today the Merchants battle the rival Morinville Jets (2-13) at 5:30 p.m. at Morinville Leisure Centre. DAN RIEDLHUBER/St. Albert Gazette

The St. Albert Merchants continued their winning ways with another big performance against a west division opponent in the Capital Junior B Hockey League.

The Merchants were coming off an 8-6 triumph against Beverly, the defending CJHL champion, last Friday at Jarome Iginla Arena.

Against the Red Wings, Ryan Cooper’s 12th goal and 30th point opened the scoring and Josh Antunes’ unassisted effort made it 2-0 before the first period ended.

The Merchants went up 3-1 on Peter Corrigan’s goal early in the third.

The Red Wings scored on a penalty shot with 3:10 left in the middle frame and halfway through the third struck on the penalty kill.

The next home game is Friday against the Spruce Grove Regals (0-17) at 8 p.m.

The 16-team bantam AAA lineup has been finalized for the John Reid Memorial Tournament.

Last year the Sabres finished 1-4 and the tournament winner was Delta (6-0) Wild with a 6-3 decision in the final against the Okanagan Hockey Academy (4-1-1).

The Sabres, with four returnees on the roster, had won three straight and five of the last six games before Friday’s contest with the KC Squires (6-6-1) at Callingwood Twin Arenas. The score was unavailable at press time.

Tuesday the Sabres faceoff against SSAC at 8 p.m. at Terwillegar Community Recreation Centre.

Wednesday’s 4-1 outcome against the Maple Leafs (3-6-1) at Go Auto Arena started with Tye Cameron’s power-play tally before Bokenfohr potted three in a row.

Bokenfohr’s last goal and fourth of the season was scored with the man advantage with 5:11 left in the second period.

The Royals were credited with 53 shots and netminder Josh McCormack (2-2-1, 3.60 GAA) produced 25 saves in addition to assisting on Bokenfohr’s first goal with 4:58 left in the opening frame.