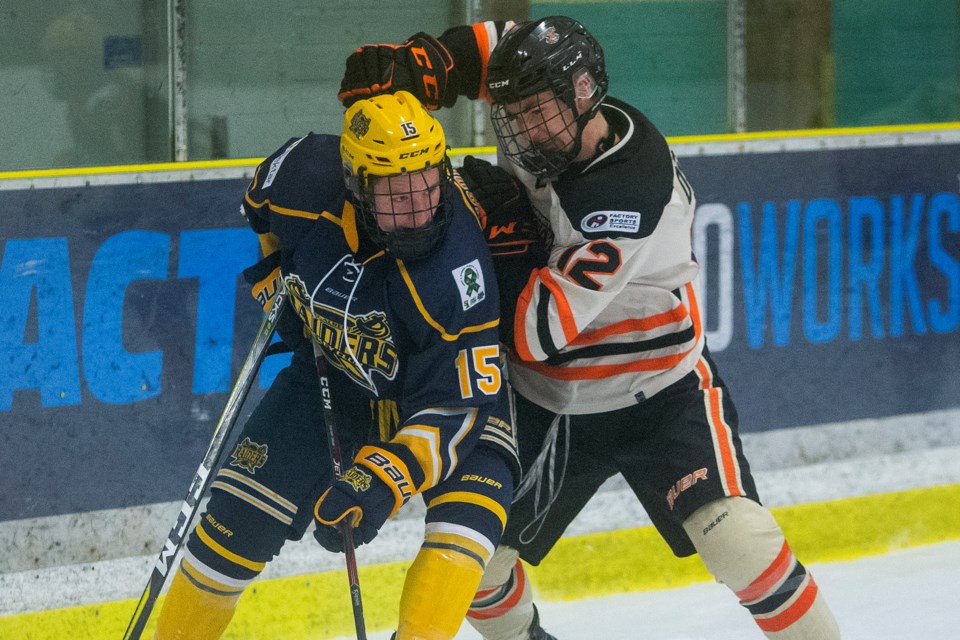 HARASSED – Mark Hanson-Torwalt of the St. Albert Nektar Raiders (12-1-2) is impeded by Brayden Oster of the Lloydminster Bobcats in Sunday's game at Jarome Iginla Arena. The Raiders (12-1-2) are tied for first overall in the Alberta Midget AAA Hockey League as the north division leaders after the 3-0 win. CHRIS COLBOURNE/St. Albert Gazette

The St. Albert Nektar Raiders are tied with the defending provincial champion Calgary Buffaloes for the overall best record in the Alberta Midget AAA Hockey League after the fourth victory in a row by the north division leaders.

Andreai Proctor-Ramirez stopped 15 shots for his third shutout and the team’s second in three games for four overall this season in Sunday’s 3-0 decision against the Lloydminster Bobcats (8-7-1) at Jarome Iginla Arena.

Kyle Norman in the first period and Koehn Ziemmer and Ty Cheveldayoff in the middle frame scored as the Raiders outshot the Bobcats 21-4 in the opening 20 minutes en route to 34 shots overall.

Last season, the Buffaloes swept the Raiders in the best-of-five provincial final and the first two games were decided in overtime, including a penalty shot in the series opener.

Saturday the Raiders faceoff against the Okotoks Oilers (12-3) at 1 p.m. in Red Deer.

The first loss after eight consecutive wins by the St. Albert Merchants was against the second-worst team in the Capital Junior B Hockey League.

It was 2-0 Mustangs when Zach Giacobbo scored and in the second Stuart Dovey capitalized on the power play with 1:48 left in the period.

Brett Akins (five GA on 22 shots in 32 minutes) and Mitchell Reidy (19 saves in 28 minutes) split time in net for the Merchants.

The 11th win of 12 games for the Merchants was Friday’s 7-4 result against the Spruce Grove Regals (1-19) at Jarome Iginla Arena.

The teams combined for 29 infractions for 74 minutes and the only power-play marker was scored by Bryce Sturm to make it 3-1 late in the first.

Ryan Deets, a forward, played the last two minutes in net as an emergency back-up to Reidy (6-3, 4.31 GAA) and stopped both shots directed his way.

Reidy faced 41 shots while the Merchants were credited with the same number against Spencer Hutson (1-4, 7.00 GAA).

In the CJHL scoring race, Cooper and Dovey are tied for fourth with 36 points apiece and Sturm is in a three-way tie for sixth with 34 points.

Dovey also leads the team in goals with 17.

The St. Albert Gregg Distributors Sabres can extend their undefeated streak to eight games with a winning performance tonight against the Sherwood Park Flyers.

The Sabres are winners of two straight during a 6-0-1 stretch after Sunday’s 6-3 victory against the KC Squires (7-8-1) at Jarome Iginla Arena.

Crandell’s 28 points ranks third in league scoring and his 17 goals are tied for third overall.