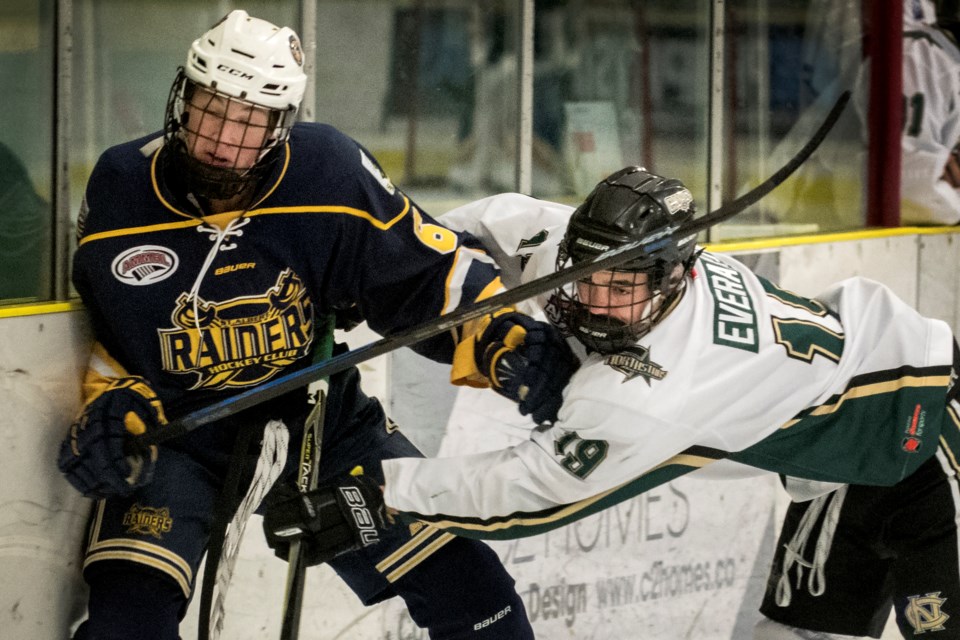 STICKED – Zachary Karran of the St. Albert Flyers is cross-checked into the boards by Devon Everard of the CNHA Canucks (9-7-3) of Calgary in Alberta Minor Midget AAA Hockey League action Sunday at Jarome Iginla Arena. The Flyers (7-6-6) lost 3-1 after winning 8-3 the day before against the PAC Saints (5-10-2) in St. Albert. The next home game is 8:15 p.m. Sunday against the Leduc Oil Kings (4-9-3) at Go Auto Arena. DAN RIEDLHUBER/St. Albert Gazette

The 2-1 result against the Calgary Buffalos at the annual AMHL Showcase Weekend event in Red Deer was the first meeting between the teams since the 2019 provincial final when the Buffaloes swept the best-of-five playoff. The first two games were decided in overtime and a penalty shot was the difference in extra time in the series opener.

The Raiders led 2-0 after 40 minutes on goals by Evan Forrest in the first period and Ronin Pusch on the power play in the middle frame and the Buffaloes replied halfway through the third.

The Raiders were outshot 33-29 as Andreai Proctor-Ramirez (8-1-1), the AMHL’s top netminder with a 1:10 GAA, .955 save percentage and three shutouts, backstopped the team to its sixth win in a row.

The Raiders started off the Showcase Weekend with Saturday’s 7-1 drubbing of the Okotoks Oilers (12-4-1).

Kyle Norman, Koehn Ziemmer and Gage Lajeunesse chased in on the power play and Mark Hanson-Torwalt, Breck McKinley, Baaz Grewal and Forrest scored at even strength.

Friday’s shutout marked the 12th victory in regulation time for the St. Albert Slash in 15 games this season in the Alberta Female Hockey League.

Jenna Goodwin’s hat-trick included a power-play goal to make it 5-0 at 11:23 of the third period.

Goodwin, the 2019 AFHL midget AAA rookie of the year, is the league leader in scoring with nine goals and 14 points.

Kyra MacDonald also capitalized with the man advantage for the team’s fourth goal at 2:17 of the second.

In the shootout, the Slash were stopped three times by Molly Mitchell (4-5, 2.00 GAA) and the Steelers scored once on three attempts against Holly Borrett (8-0, 0.74 GAA).

Shorts were 32-21 for the Slash over three periods and the five-minute overtime session.

The last home game before the Christmas break for the Slash is next Saturday against the Calgary Fire (7-7) at 2:15 p.m. at Go Auto Arena.

The St. Albert Merchants are banking on a bounce-back performance tonight in the Capital Junior B Hockey League after Sunday’s loss to the defending Founders Cup playoff champions.

Faceoff is 8 p.m. against the North Edmonton Red Wings (16-4-1) at Londonderry Arena.

The second loss in three games for the Merchants after winning eight straight was 8-3 against the Beverly Warriors (17-4) at Jarome Iginla Arena.

Highlighting the winning streak was the 8-6 home-ice decision Nov. 6 against Beverly, the fourth-place finisher at the 2019 provincials after winning bronze in 2018 as the CJHL finalists.

In the rematch at St. Albert, Beverly piled up five goals before Ryan Cooper answered with a pair in the second period.

Cooper is fifth in CJHL scoring with 39 points and is second on the Merchants in goals with 16 in 18 games.

The eighth goal for the visitors was potted on the power play with 1:55 to play.

The loss left the Merchants three points behind the Red Wings and six back of the Beverly in the west division.

The Merchants remain three points in front of the fourth-place Stony Plain Flyers (12-9-1) after doubling the Flyers 6-3 Friday at Glenn Hall Centennial Arena.

Noah Fayad’s five-point night included three assists and his second goal was deposited into an empty net with three ticks on the clock.

Reidy (7-4, 4.43 GAA) faced 28 shots before duking it out with Jared Opryshko with 14 minutes remaining. Reidy was also penalized for slashing on the play and Oprushko (102 PIM in 20 games) was tagged with a gross misconduct that resulted in a two-game suspension.

The Morinville Jets are playing their best hockey of the season with back-to-back wins in the Capital Junior B Hockey League.

The fourth victory in six games was 4-2 against the Spruce Grove Regals (1-21) Sunday In Morinville.

Zach Mcrae, Josh Mcrae, Jeff Smith and Ryan Denton (shorthanded) lit the lamp as the Jets outshot the Regals 36-35 with Kyle Nelson (2-3, 3.62 GAA) between the pipes.

The Jets had dropped two in a row before Friday’s 1-0 upset of the Beverly Warriors (17-4) in Morinville.

Tanner Schnirer (3-5, 4.66 GAA) recorded the Jets’ first shutout this season and Zach Mcrae’s unassisted effort before the five-minute mark of the opening period stood as the game winner.

The midget elite St. Albert Sharks have a pair of road games scheduled this weekend in the Alberta Female Hockey League.

The third consecutive win for the Sharks was 1-0 against the North Central Impact (2-6-3) Saturday in St. Albert.

Mikayla Sarapuk scored halfway through the second period with Regan Ackroyd and Raeanne Cyr assisting on the play.

The Sharks killed off three penalties whole going 0-for-5 on the power play.