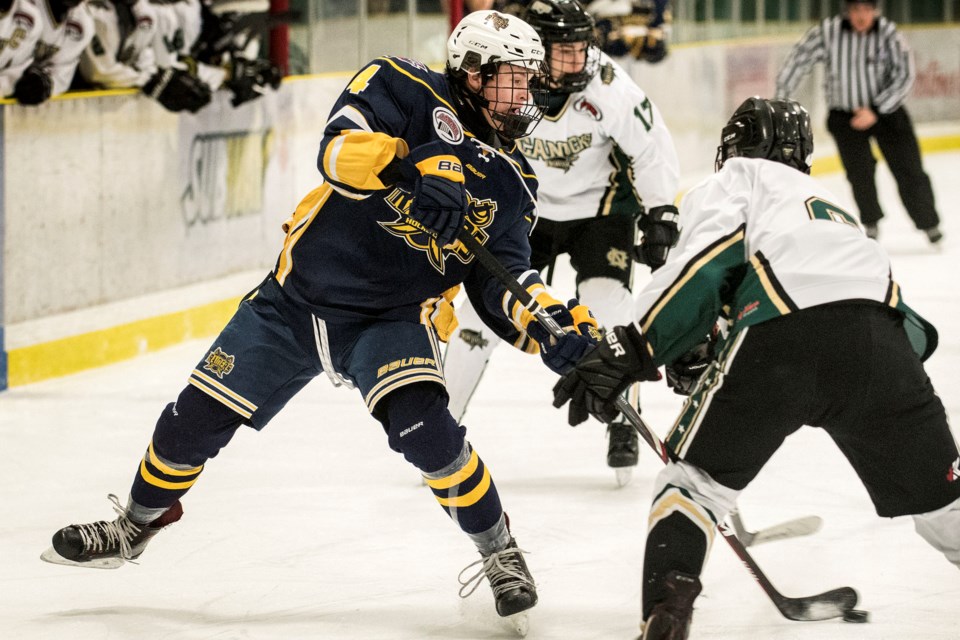 MAKING A PLAY – Zakk Makeiff looks to dish the puck off for the St. Albert Flyers in Sunday's 3-1 loss to the CNHA Canucks (9-7-3) of Calgary at Jarome Iginla Arena. This weekend in the Alberta Minor Midget AAA Hockey League, the Flyers (7-6-6) travel to play the Sherwood Park Squires (11-3-3) tonight at 7:30 p.m. and Sunday's game against the Leduc Oil KIngs (4-9-3) starts at 8:15 p.m. at Go Auto Arena. DAN RIEDLHUBER/St. Albert Gazette

Three former players in the St. Albert Raiders Hockey Club program were selected to the Team Canada West roster for the World Junior A Challenge.

Defenceman Michael Benning and left-winger Carter Savoie of the Sherwood Park Crusaders and defenceman Ethan Edwards of the Spruce Grove Saints are among nine Alberta Junior Hockey League players on the 22-man roster.

The recent Team Canada West tryouts in Calgary consisted of 44 players from Canadian Junior Hockey League’s western junior A leagues in Alberta, British Columbia, Saskatchewan and Manitoba, plus the Superior International Junior Hockey League and the AJHL was represented by 15 players.

Benning, Savoie and Edwards played together with the 2016/17 St. Albert Gregg Distributors Sabres in the Alberta Major Bantam Hockey League.

The NHL Central Scouting’s Watch List in October listed Savoie as the top-ranked CJHL player with a B rating as a potential second or third round selection candidate.

Benning and Edwards were rated as C prospects as possible fourth, fifth or sixth round choices.

Savoie, 17, has piled up 30 goals as the AJHL’s co-leader in points with 51 in 27 games after compiling 31 goals and 73 points in 58 games as the top-scoring Crusader last season.

Benning, 17, is the AJHL’s highest-scoring defenceman with 33 assists and 40 points in 27 games and last season’s 61 points as the league co-leader among defencemen included 51 assists in 60 games.

Benning was also named the top defenceman at the 2019 Junior Club World Cup in Sochi, Russia as the AJHL Selects, with Savoie and former midget AAA St. Albert Nektar Raiders' defenceman Robert Kincaid of the Camrose Kodiaks in the lineup, finished second in the tournament after losing 3-0 to Yaroslavl Loko in the final.

The Merchants were unable to find the back of the net on 35 shots, including 16 in the third period, while the Red Wings wrapped up the 5-0 decision with four goals on 17 shots in the final 20 minutes after scoring on the power play 6:39 into the contest.

The second loss in a row was also the third in four games for the Merchants (14-8) after rattling off eight straight wins in the Capital Junior B Hockey League.

Sunday the Merchants host the Leduc Riggers (12-9) at 8 p.m. at Jarome Iginla Arena and the team’s home record is 6-3.

The Merchants beat the Jets 3-2 in September at St. Albert and 7-4 last month at Morinville.

The St. Albert Flyers skate into the weekend with two wins in four games in the Alberta Minor Midget AAA Hockey League.

The last game for the Flyers was Sunday’s 3-1 loss to the CNHA Canucks at Jarome Iginla Arena.

Liam Cochrane’s team-leading 12th goal was a shorthanded effort with 2:26 remaining after the Canucks tallied twice in the first period before making it 3-0 halfway through the second.

Shots were 32-31 for the Canucks, a Calgary team in the south division.

The Flyers are led offensively by Zakk Makeiff’s 24 points, Cochrane’s 23 and Liam Fitzgerald’s 15 assists and 22 points.