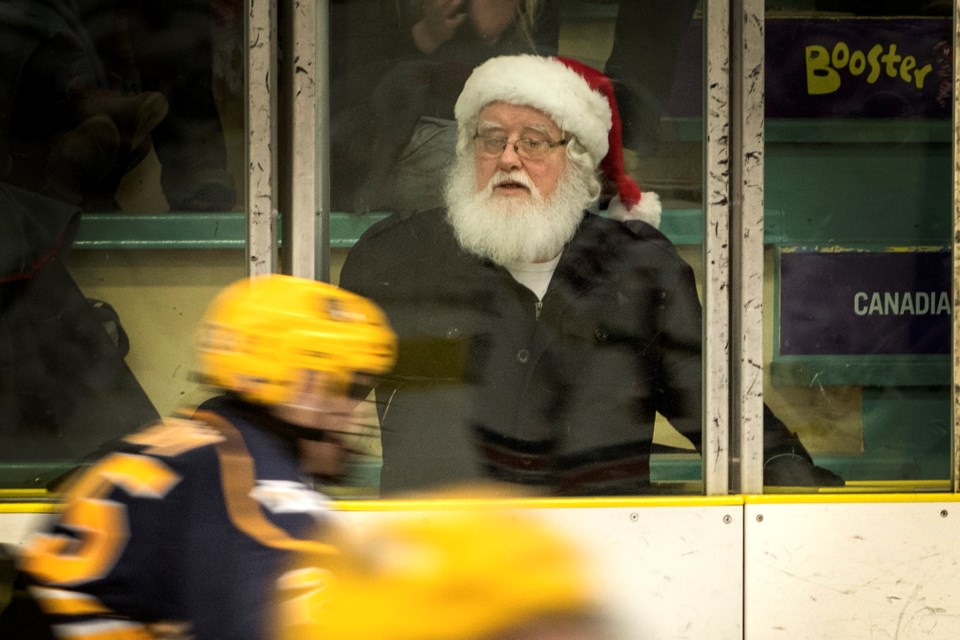 SIN-BIN SANTA – Barry Bradley of St. Albert works as an official in the penalty box during Sunday's game between the St. Albert Gregg Distributors Sabres and Canadian Athletic Club at Jarome Iginla Arena. Bradley just needed the hat to look like the affable St. Nick and was volunteering while watching his grandson play for the Sabres (16-3-1), the No. 1 team in the Alberta Major Bantam Hockey League. The Sabres beat the CAC 4-1 and the next game is today during Raiders Day in St. Albert. Faceoff time is 5:15 p.m. against the Lloydminster Bobcats at Go Auto Arena. DAN RIEDLHUBER/St. Albert Gazette

Eight of the 12 St. Albert Raiders Hockey Club teams will be on display in seven games at Servus Credit Union Place.

The rest of the games are as follows:

The second annual Raiders Day is a celebration of hockey in St. Albert while promoting the history of the Raiders Club in developing good hockey players and good people.

The Raiders Club will have food bank and toy collection bins at all three rinks and is donating its portion of the day-long progressive 50/50 to Special Olympics St. Albert. The winning number will be announced through raidershockey.ca and social media.

The Raiders Club also has an information booth situated on the upper floor with a board member available to answer questions, plus a silent action sports’ memorabilia table with items from Raiders’ alumni in the National Hockey League.

The St. Albert Bears are hosting a #Bearsfighthunger game Dec. 22 against the St. Albert Blues in the Edmonton Rural Bantam AA Hockey League.

Fans are encouraged to bring non-perishable food items in support of the St. Albert Food Bank.

Hunter, the Edmonton Oilers’ mascot, will be in attendance.

The team motto for the Bears is Give or Get.