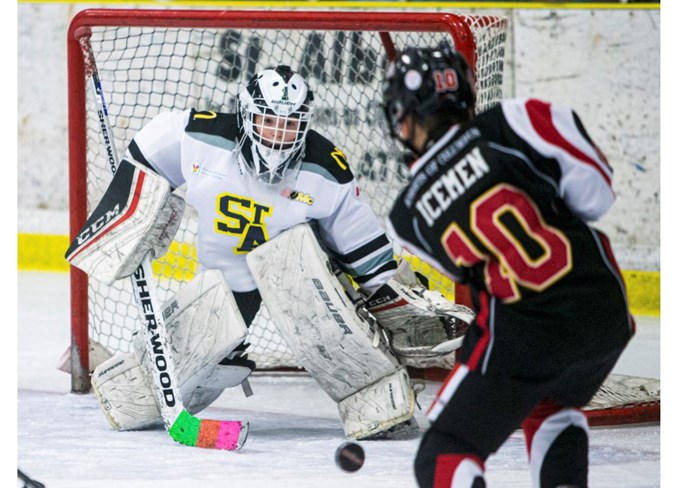 TENDING THE TWINE – Hayden Bogart of the St. Albert Crusaders stares down a shot by Luca Mauro of the KC Icemen at the Shootout in St. Albert atom AA tournament last weekend at Jarome Iginla Arena. Sunday's final was 3-2 for the Confederation Vipers against the Crusaders. In Saturday's skills competition, Roan Greschuk of the Crusaders fired the hardest shot at 91 kilometres per hour. CHRIS COLBOURNE/St. Albert Gazette

The next playoff round for the St. Albert Merchants is the quarter-final series against the Beverly Warriors in the Capital Junior B Hockey League.

The best-of-five dates were not finalized by the CJHL at press time, but game one is expected to take place Friday at Clareview Arena or Jarome Iginla Arena.

Visit cjhl.org for the playoff schedule.

The teams split the season series with Beverly winning 8-3 at Clareview on Sept. 22 and in St. Albert on Dec. 1 while the Merchants prevailed 8-6 at home Nov. 8 and 3-2 in overtime Feb. 2 at Clareview.

Beverly had a first-round bye while the Merchants eliminated the Spruce Grove Regals in the best-of-three west division qualifying round by scores of 3-2 in overtime and 6-2.

In the series opener Friday in St. Albert, Bryce Sturm sniped the winner on the only shot in OT six minutes into the extra period as Stuart Dovey and Kyle Fulton assisted on the play.

Shots were 49-48 for the Merchants with Nate Reinhart steady between the pipes.

Josh Antunes tallied twice in the first period with Sturm and Jacob Karran assisting on both goals and the Regals knotted it at two on the power play in the second frame.

The Merchants racked up 70 penalty minutes on 15 infractions as Karran was assessed 50 minutes over a variety of misdeeds.

Karran, a repeat offender in league play, was issued a four-game suspension for his actions.

The Regals were 1-for-8 on the power play.

Sunday in Spruce Grove, the Merchants blitzed the Regals for six goals before the home team replied with 2:19 left in the second with the man advantage.

Ryan Cooper lit the lamp on the power play and the penalty kill during a three-point night and Zach Giacobbo connected at even strength and with the man advantage.

Shots were 39-24 for the Merchants in support of Reinhart.

The Regals were penalized 70 minutes on 16 infractions as two players received one-game suspensions even though the season is over for the team.

The season is on the line for the Morinville Jets tonight in the Capital Junior B Hockey League playoffs.

The third and deciding game between the Jets and Stony Plain Flyers in the west division qualifying round goes at 8:30 p.m. at Glenn Hall Centennial Arena.

The winner plays the North Edmonton Red Wings (30-7-1), the top team in the west, in the best-of-five quarter-finals starting 8 p.m. Friday at Londonderry Arena.

The Jets evened the series at one game apiece on affiliate Cache Schiler’s 7-6 winner four minutes into overtime Sunday at Landrex Arena.

It was Schiler’s third point of the contest after contributing one goal and one assist in five games as a call-up in the regular season.

The Flyers forced OT with two unanswered goals in the third and the tying marker was potted on the power play with 1:52 left in regulation time.

The Jets outscored the Flyers 5-3 in the second as Josh Mcrae slotted a pair at even strength and one shorthanded.

Regan Regimbald and Hayden Laporte also found the back of the net.

Bryn Soetart opened the scoring in the first and the Flyers pulled even before the period ended with their first of three power-play goals.

Shots were 5-1 in OT for the Jets for a final count of 37 apiece with Luke Hall tending the twine.

Colby MacLean in the first, Mcrae in the second and affiliate Graeme Hampton and Regimbald in the third scored as the Jets recorded 32 shots.