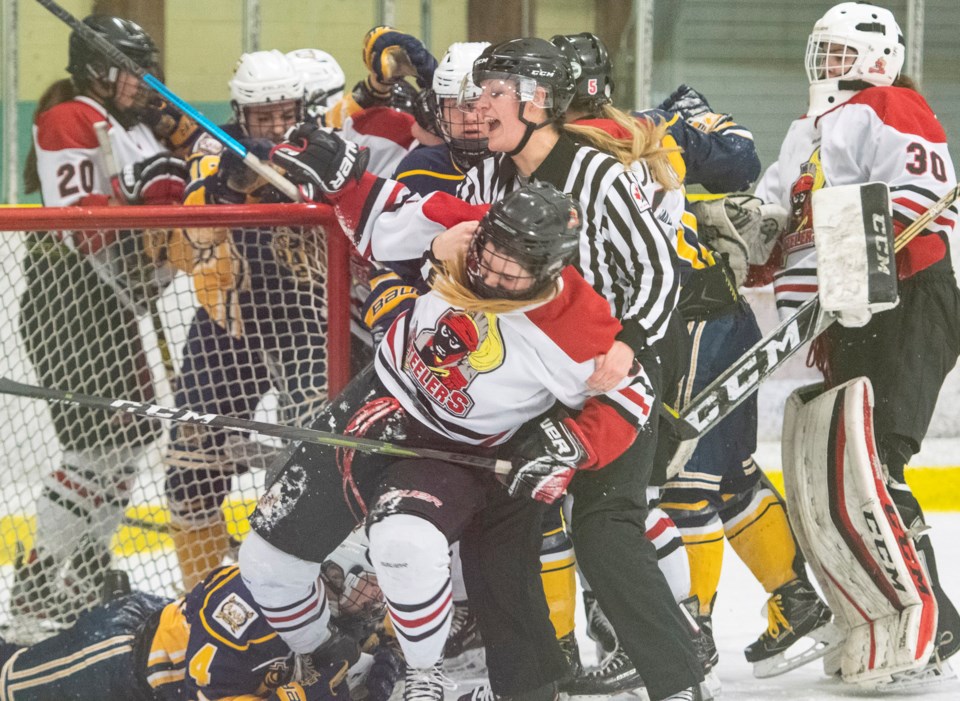 COMMOTION - A disturbance erupts between the St. Albert Slash and Lloydminster Steelers as the teams combined for 74 penalty minutes - 48 for the Steelers (9-14-3) and 26 for the Slash (23-2-1) - in Sunday's midget AAA game in the Alberta Female Hockey League. The Slash won 2-1 at Jarome Iginla Arena. Tonight at 7:45 p.m. the Slash host the Edmonton Pandas (15-8-2) at Go Auto Arena. Friday's score against the Rocky Mountain Raiders (14-8-4) in St. Albert was unavailable at press time. BRUCE EDWARDS/St. Albert Gazette

Tonight is the last home game for the St. Albert Slash in the Alberta Female Hockey League.

Friday the Slash (23-2-1) played the Rocky Mountain Raiders (14-8-4) in St. Albert and the score was unavailable at press time.

The Esso Cup midget AAA national champions three years in a row have a spot locked up in the Final Frozen Four provincials, March to 22 in Calgary, as the first-place AFHL team.

League play ends next weekend for the Slash with away games against the Pandas and Lloydminster Steelers (9-14-3).

The Slash and Steelers hooked up Sunday at Jarome Iginla Arena with the home team winning the penalty-filled affair 2-1.

All three goals were scored on the power play as Jenna Goodwin recorded her AFHL-leading 13th goal and 22nd point to snap a 1-1 tie late in the middle frame after assisting on third goal in four games by defenceman Dayle Ross.

The St. Albert Nektar Raiders are playing the waiting game as the No. 1 team in the Alberta Midget AAA Hockey League.

The north division pennants winners for the second straight season have a first-round bye for a berth in the best-of-five division semifinals after finishing 27-1-4 (130 GF/47 GA).

The Raiders ended the regular season with 19 wins and two ties after the 2-1 loss to the Sherwood Park Kings (9-14-6) Nov. 6 at Jarome Iginla Arena.

The AMHL's top defensive team with the lowest goals-against average at 1.46 is also second-best offensively with 4.06 goals per game.

Andreai Proctor-Ramirez was first among AMHL netminders with 15 wins, 1.25 GAA, .950 save percentage and five shutouts.

Captain Mathieu Gautier led the Raiders in points with 32, followed by Jaxon Dube and Evan Forrest with 27 apiece.

Ronin Pusch was the team’s top goal scorer with 16 and Koehn Ziemmer was second with 15.

The first-place St. Albert Source for Sports Crusaders are in action today in the Northern Alberta Hockey League.

The Besa division Crusaders (25-3-1) are first overall in the NAHL by one point over the Milltech division NEBC Yukon Trackers (24-5-2).

Sunday the Crusaders travel to Wainwright to play the Polar Kings (9-16-3) at 11:5 a.m. in the second-last game before the Besa regional playoff tournament March 3 to 11.

Meanwhile, the St. Albert Steel (22-5-2) have one game left after Friday’s home tilt with the KC Colts (4-22-2) and the score was unavailable at pres time.

The Steel are second behind the Crusaders in the Besa standings and in the season series the Steel beat the Crusaders 6-4 Dec. 14 and 8-6 Jan. 24.