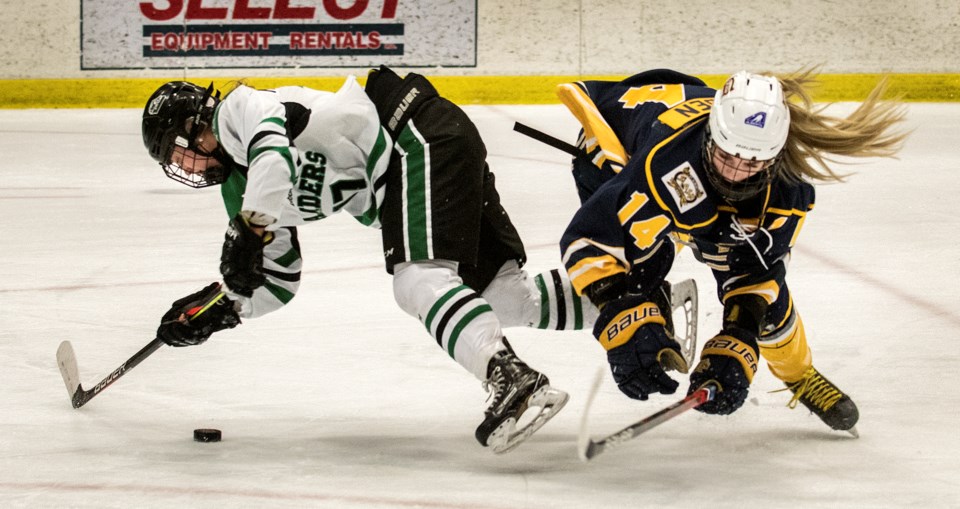 TRIP ON THE WILD SIDE – A collision sends Jaden Bogden, right, of the St. Albert Slash and Kaia Borbundy of the Rocky Mountain Raiders sprawling to the ice in Saturday's midget AAA game in the Alberta Female Hockey League. The Slash (16-1-1) won 2-1 at Go Auto Arena. Cassidy Rhodes (power play) and Kelsey Hall scored before the Raiders (9-7-3) replied with the man advantage with 4:45 remaining. Shots were 17-14 for the Slash in support of netminder Mabel Maltais (10-0, 0.99 GAA). Tonight at 8:15 p.m. the three-time defending Esso Cup national champions play the Edmonton Pandas (10-5-2) at Bill Hunter Arena. DAN RIEDLHUBER/St. Albert Gazette

Not even a non-playoff appearance as the defending Mac’s Cup champions could stop the St. Albert Nektar Raiders from continuing their winning ways in the Alberta Midget AAA Hockey League.

Only a few days after letting a playoff berth slip away in the waning moments of the last two games of pool play while going 2-1-1 at the 42nd annual Mac’s World Invitational in Calgary, the Raiders resumed their league schedule last weekend with road wins of 2-1 over the Red Deer Chiefs and 5-0 against the Calgary Flames.

The results strengthened the team’s first-place 20-1-3 record with eight games remaining before the playoffs.

Last year’s provincial finalists also have the north division pennant locked up for the second season in a row.

The second-best AMHL team is the Calgary Buffaloes (16-4-4) of the south division as the 2019 provincial champions and winners of the Mac’s Cup final Jan. 1.

Last month, the Raiders beat the Buffaloes twice in a seven-day span by identical 2-1 scores.

In the first game after the Mac’s, Carson Ironside stopped 32 shots as Ty Cheveldayoff, captain Mathieu Gautier and Ronin Pusch found the back of the net against Red Deer (11-10-3).

Maddux Nollski’s second goal of the game was slotted on the power play and Breck McKinley chipped in with two assists.

Pusch’s goal was his team-leading 11th.

The St. Albert Gregg Distributors Sabres are firing on all cylinders on the eve of the John Reid Memorial Tournament.

The 16-team draw features four divisions of pool play to determine the A, B and C playoff brackets.

Fans are encouraged to bring a teddy bear wrapped in a plastic bag to throw on the ice after the Sabres’ first goal against Los Angeles.

The tournament schedule is listed in Scoreboard on page 35 and at johnreidmemorial.com.

The last game for the Sabres before the Reid tournament is Sunday versus the Canadian Athletic Club (3-14-5) at 5 p.m. at Jarome Iginla Arena.

Head coach Steve Ewaskiw and his staff will run the north all-star bench.

The first game after the Christmas break for the Sabres featured two goals on the penalty kill in the first period and three on the power play in the second frame against Leduc.

The St. Albert Merchants started off the new year with a loss against the last-place team in the east division of the Capital Junior B Hockey League.

The Strathcona Bruins (11-17-2) scored the winner with 31 seconds left in regulation time after netting the equalizer with 3:50 to go in Friday’s 4-3 decision at Jarome Iginla Arena.

The loss was the fourth in a row and the fifth in six games for the third-place Merchants (16-13) in the west division.

Nate Reinhart made his Merchants debut as the sixth player this season to tend the twine and the total includes forward Ryan Deets (one GA in 11 minutes in two games) as the team’s emergency puck stopper.

Reinhart stopped 37 shots as the Bruins led 1-0 after the first period and knotted the score at two with 1:56 left in the second.

Kiegan Miller and Josh Antunes struck on the power play in the middle frame while outshooting Strathcona 27-10 in the period.

Bryce Sturm made it 3-2 five minutes into the third.

The Merchants finished with 47 shots against netminder Cooper Kennedy (2-2, 3.94 GAA).

Strathcona proved Friday’s result wasn’t a fluke by defeating the Morinville Jets (10-18-1) 4-3 in a shootout Sunday at Landrex Arena.