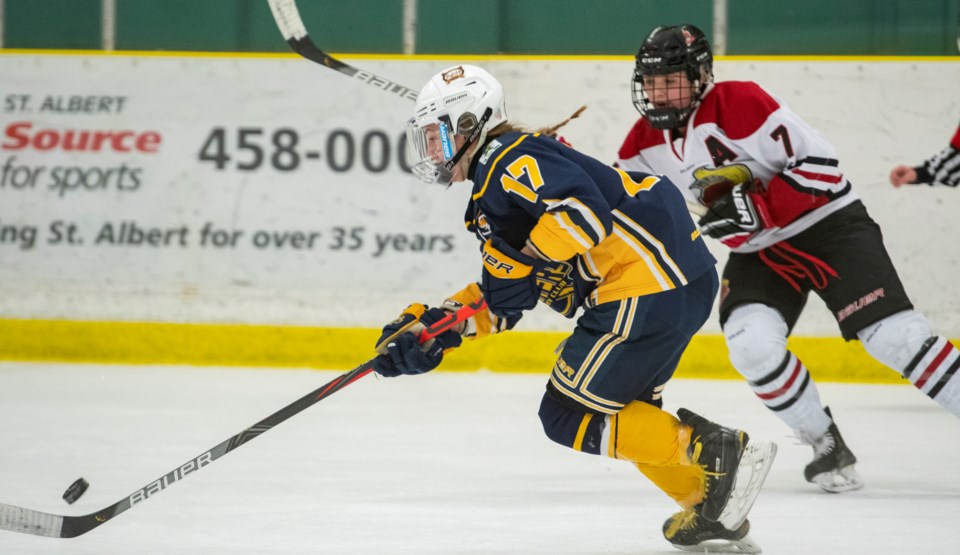 LEADING THE WAY – Bronwyn Boucher of the St. Albert Slash breaks away from Jacelyn Scott of the Lloydminster Steelers during action in the Alberta Female Hockey League. The Slash (25-2-3) finished first in the six-team midget AAA standings for a berth at the AFHL Final Frozen Four provincials, March 20 to 22 in Calgary. The Slash are the three-time defending Esso Cup national champions. BRUCE EDWARDS/St. Albert Gazette

The St. Albert midget AA teams in the Northern Alberta Hockey League are in action today in the Besa division tournament at Spruce Grove.

The Steel faceoff against the PAC Saints at 3 p.m. at Grant Fuhr Arena and the Source for Sports Crusaders play the Sturgeon Sting at 7:15 p.m. at Tri-Leisure Centre.

Friday’s scores between the Steel and Sturgeon and the Crusaders against the Saints were unavailable at press time.

The Crusaders, the defending Playoff Cup champions, started off the tournament with victories of 9-2 against the Leduc Roughnecks and 8-6 against the Fort Saskatchewan Rangers and the Steel were also successful by beating the Rangers 4-1 and the Roughnecks 7-0.

The rest of the playoff schedule was unavailable at press time.

The winner of the seven-team Besa playoff qualifies for the best-of-three metro conference final against the Anderson division tournament rep.

After two playoff games, Brett Reiter of the Steel led all scorers with eight points and was tied with Zachry Desranleau of the Crusaders and two other players for the most goals at four apiece.

In league play, Brady Harroun of the Crusaders racked up a league-high 47 goals in 32 games as the co-leader in points with Blake Anderson of the Peace River Royals at 70 apiece.

Reiter tied for fifth in the scoring race with 59 points.

The next playoff round for the St. Albert Blues starts tonight in the Edmonton & Rural Bantam AA Hockey League.

Game two is 1 p.m. Sunday at Confederation Arena and game three, if needed, is 7 p.m. Tuesday at Jarome Iginla Arena.

The CAC is 5-0 n the playoffs and the Blues are 4-1 after blanking the Sherwood Park Leafs 3-0 in Tuesday's division final.

In league play, Tysen Tomlinson was the top scorer for the Blues with 21 goals and 34 points, followed by Curan McLaughlin with 20 goals and 32 points and Pisani’s 19 goals and 31 points.

Capstick ranked tied for fourth among ERBHL netminders with a 2.02 GAA.

The midget elite St. Albert Sharks have a first round-bye as the north division leaders in the Alberta Female Hockey League.

The Sharks have lost the last two provincials finals to the Calgary squads.

Sierra Whillans led the Sharks in scoring with 17 goals and 24 points in 23 games.