Raiders beat Buffaloes again to stay No. 1 in Alberta Midget AAA Hockey League is the top story in Rinkside Report
Dec 11, 2019 9:00 AM By: Jeff Hansen 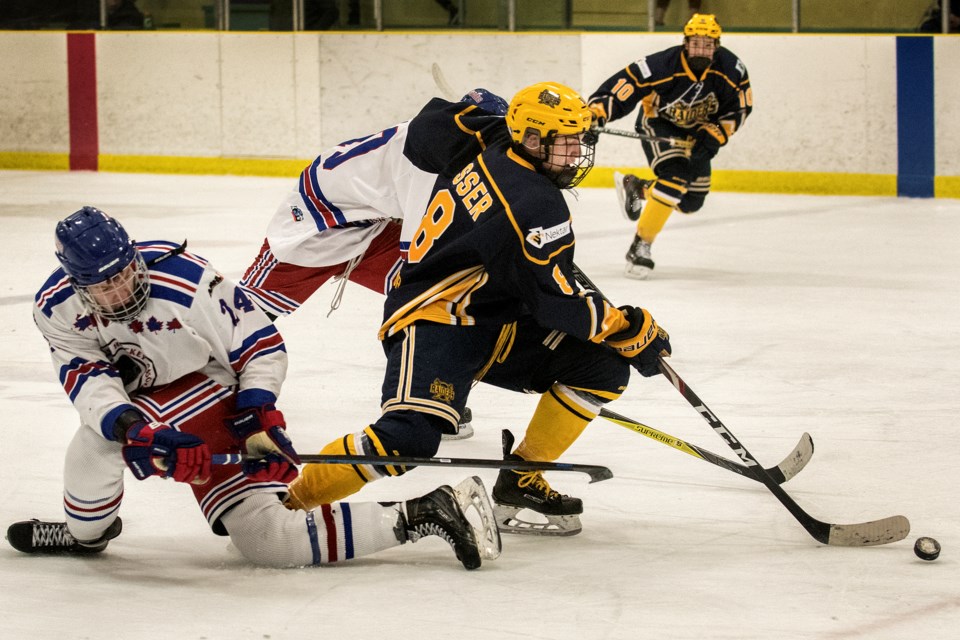 GOAL GETTER – Chase Visser of the St. Albert Nektar Raiders skates past Kort Kisinger, left, and Daniel Kernaghan of the Calgary Buffaloes on his way to scoring the winning goal with 54 seconds remaining in Sunday's showdown between the top two teams in the Alberta Midget AAA Hockey League. The 2-1 result at Jarome Iginla Arena was the same score for the Raiders (16-1-2) over the Buffaloes (14-4-2) the week before in Red Deer. Both teams also competed in the 2019 AMHL provincial final with the Buffaloes sweeping the best-of-five series. For more coverage, see page 39.

The St. Albert Nektar Raiders strengthened their No. 1 status in the Alberta Midget AAA Hockey League by beating the provincial champions for the second weekend in a row.

Sunday’s 2-1 victory against the Calgary Buffaloes (14-4-2) at Jarome Iginla Arena was also the same score for the Raiders (16-1-2) against the south division leaders the previous Sunday in Red Deer.

The rematch was decided on Chase Visser’s second goal of the season with 54 seconds to play as Tye Pedersen and Breck McKinley assisted on the winner.

McKinley opened the scoring in the first minute of the middle frame and the Buffaloes pulled even at 6:55 of the third.

Shots were 22-20 for the Buffaloes as Andreai Proctor-Ramirez backstopped the Raiders to their eighth consecutive win.

Proctor-Ramirez (9-1-1) is the AMHL’s top netminder with a 1.09 GAA and .955 save percentage and is tied for the league lead in shutouts with three.

The second tilt between the teams since the 2019 playoffs – the Buffaloes swept the best-of-five provincial final and the first two games were decided in overtime – featured the stingiest defensive team (1.36 goals-against per game for the Raiders) versus the highest-scoring offence (4.25 goals per game for the Buffaloes) in the AMHL.

The day before in Sherwood Park, Raiders' captain Mathieu Gautier tallied twice in the opening period and Ronin Pusch assisted on both goals in the 5-3 decision against the Kings (6-11-3).

The second goal by Gautier during a 2:14 span was deposited on the power play.

Jaxon Dube also found the back of the net in the first to make it 3-0.

The last loss for the Raiders was 2-1 against the Kings on Nov. 6 in St. Albert.

Upcoming for the Raiders is the Midget AAA World Invitational Tournament in Calgary during the Christmas break as the defending Mac’s Cup champions.

The St. Albert Gregg Distributors Sabres are winners of six in a row as the top team in the Alberta Major Bantam Hockey League.

Evan Zazulak struck twice during a 21-second span in the second period to open the scoring in Sunday’s 4-1 decision against the Canadian Athletic Club (3-10-5) at Jarome Iginla Arena.

Zazulak’s first goal was a power-play tally at the 7:16 mark.

Evan Sundar and Tyden Redlick closed out the win in the third as the Sabres extended their undefeated streak to 11 games at 10-0-1.

The Sabres started off the weekend with Friday’s 7-1 drubbing of the KC Squires (7-9-1) as special teams accounted for six goals – five on the power play, including a pair by Carmelo Crandell as the team capitalized four times with the man advantage in the third, and one on the penalty kill by Blake Brezovski.

Crandell is second in AMBHL scoring with 35 points in 20 games and is third in goals with 21, including a league-high seven on the power play.

The next game is Saturday on Raiders Day in St. Albert against the Lloydminster Bobcats (9-3-5), the first-place Charger north team, and the start time is 5:15 p.m. at Go Auto Arena

Friday marks the first of three home matches before the Christmas break for the St. Albert Merchants in the Capital Junior B Hockey League.

The Merchants (15-8) are coming off Tuesday’s rivalry game against the Morinville Jets (6-17) and the score from Landrex Arena was unavailable at press time.

The first win for the Merchants after losses of 8-3 against the Founders Cup playoff champion Beverly Warriors (19-4) in St. Albert and 5-0 against the North Edmonton Red Wings (17-5-1) at Londonderry Arena was 8-5 versus the visiting Leduc Riggers (12-11) Sunday.

Ryan Cooper’s hat-trick included his second of the night to make it 3-0 with 2:51 left in the first period.

Cooper’s 42 points in 20 games ranked fifth in CJHL scoring and was the team leader in goals with 19 before playing the Jets.

Jack Langenhahn finished with three assists and Corrigan and Stuart Dovey had two helpers each.

Sunday the Merchants faceoff against the Edmonton Royals (18-4-1) at 8 p.m. at Coronation Arena.

The last game in December for the midget elite St. Albert Sharks is Friday in the Alberta Female Hockey League.

Sunday’s 3-0 loss to the Edmonton Pandas at Bill Hunter Arena left the Sharks (8-3-1) tied with the Pandas (8-2-2) for second place behind the north division-leading Lloydminster Steelers (9-3-1).

The fourth consecutive victory for the Sharks was 3-2 against the host Sherwood Park Fury (1-11-1) in Saturday’s penalty-filled affair.

Jorja Werenka, Elle Harapchuk and Sierra Whillans scored in the middle frame before the Fury replied with a pair before the period ended.

The Steel and Source for Sports Crusaders faceoff at 8:30 p.m. at Mark Messier Arena.

The Crusaders 14-0-1) and Steel (10-3-1) are first and second, respectively, in the Besa division of the metro conference.

The Crusaders, repeat winners of the Playoff Cup, are also first overall in the 23-team league.

The last game for the Crusaders was Monday against the host Sherwood Park Oilers (9-4-2) of the Besa division and the score was unavailable at press time.