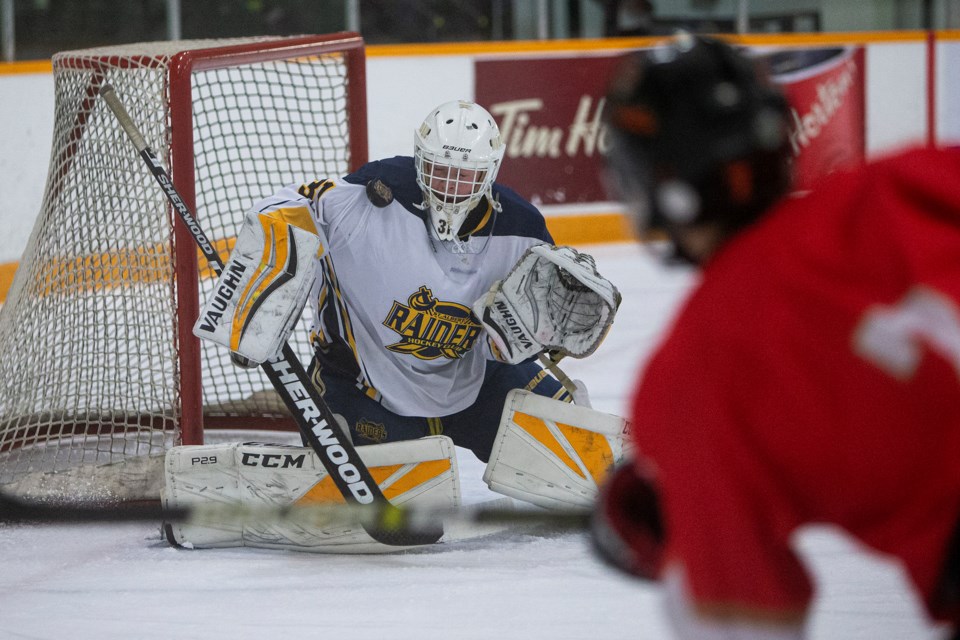 NET TENDER – Josh McCormack of the St. Albert Royals blocks a puck in Sunday's 4-3 setback to the Hockey Central Panthers of Sylvan Lake. The Panthers (16-2-2) directed more than 50 shots at McCormack in the Rural & Edmonton Midget 15AA Hockey League game at Mark Messier Arena. The loss left the Royals (8-9-4) with a 3-3-1 record in December. The next game is 8:15 p.m. Friday against SSAC Dolce Vita Homes (11-9) at Millwoods Arena. CHRIS COLBOURNE/St. Albert Gazette

The next major international competition for Matthew Savoie is the third annual Winter Youth Olympic Games.

The St. Albert centreman is among 17 2004-born players who will wear the Maple Leaf at the Jan. 9 to 22 tournament in Lausanne, Switzerland.

Hockey Canada sought the support of its member branches and regional scouts in identifying a list of players from across the country for consideration for nomination to the Canadian Olympic Committee. Four players were selected from each of the west, east and Ontario regions, with five players from across Canada added to fill the remaining positions.

Savoie and forward Nate Danielson of Red Deer are the only Albertans on the team.

Canada, the silver medallist at the 2016 Youth Olympics, will face Russia and Denmark in group B play in the preliminary round.

The Youth Olympic Games, a multi-sport event organized by the International Olympic Committee, are held every four years with staggered summer and winter Games. The age limitation for athletes is 14 to 18.

Savoie, who turns 16 on Jan. 1, played in the World U17 Hockey Challenge in November and with Canada White recorded one goal and five assists in six games as an underage player. Overall, 66 players were chosen to represent Canada on three teams at the U17 Worlds.

Savoie is rated as a potential top-two selection in the 2022 NHL Entry Draft.

The No. 1 pick in the 2019 Western Hockey League bantam draft by the Winnipeg ICE plays for the Winnipeg-based Rink Hockey Academy of the Canadian Sport School Hockey League and in 17 games has racked up 16 goals and 42 points.

As an affiliate with the ICE, Savoie has four assists in 10 WHL games.

Savoie was also the 2019 most valuable player in the CSSHL midget prep division with the Northern Alberta Xtreme (31 goals and 71 points in 31 games) despite playing one year above his age group.

At the 2019 Canada Winter Games, Savoie generated six goals and 13 points in six games with the U16 Alberta team.

Left winger Carter Savoie and defencemen Michael Benning and Ethan Edwards are among the eight Alberta Junior Hockey League players on Team West for the Prospects Game on Jan. 14 at Dave Andreychuk Arena in Hamilton, Ont.

The CJHL, in partnership with the National Hockey League and Hockey Canada, as well in conjunction with NHL Central Scouting, selected the Team West and Team East rosters.

Savoie and Benning are members of the Sherwood Park Crusaders and Edwards is with the Spruce Grove Saints.

Savoie, Benning and Edwards recently played at the World Junior A Challenge with Team Canada West.

Savoie and Benning also competed at the 2019 Junior Club World Cup at Sochi, Russia with the AJHL Selects, the tournament’s silver medallists. Benning was named the top defenceman at the event.

Benning, a 2019 North Division All-Rookie in the AJHL, has produced eight goals and a league-high 48 points in 32 games after piling up 10 goals and 61 points in 60 games last season.

Edwards, an AJHL rookie, has seven goals and 21 points in 31 games with the Saints.