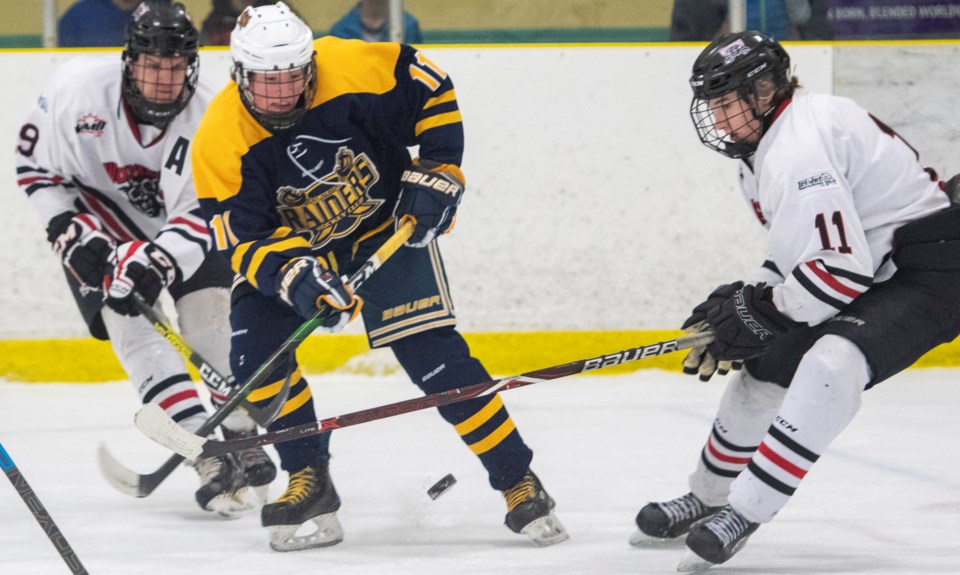 BUSTING THROUGH – Kaelan Shelton of the St. Albert Source for Sports Crusaders attempts to work the puck past Zachary Fraser, right, and Maverick Schroeder of the Whitecourt Wolverines in the Northern Alberta Midget AA Hockey League game Saturday at Jarome Iginla Arena. The first-place Crusaders (27-3-1) outscored Whitecourt (4-25-1) in the first period 7-1, en route to the 9-2 drubbing. The defending Playoff Cup champions also clobbered the host Wainwright Polar Kings (9-18-3) Sunday 11-2 and Monday's score against the Maple Leafs (22-4-2) at Millwoods Arena in the last game before the playoffs was unavailable at press time. The Besa division playoff tournament to determine the metro conference semifinalist goes March 3 to 11 for the Crusaders and St. Albert Steel (25-5-2). BRUCE EDWARDS/St. Albert Gazette

If needed, game five is 8 p.m. Sunday at Clareview.

It’s the third playoff series in as many years between the Merchants and Beverly after the Warriors swept the last two quarter-finals.

Beverly went on to capture last year's Founders Cup championship and at provincials finished fourth after winning bronze in 2018 as the CJHL finalists.

Game one started with Stuart Dovey opening the scoring in the second period and Beverly replied with five straight, including a pair on the power play.

An even-strength-maker with 22 seconds left in the middle frame made it 3-1 Beverly.

The Merchants were outshot 18-6 in the second and 40-21 overall with Reinhart in net.

The next game the Merchants led 3-1 after two periods on goals by Josh Antunes, Peter Corrigan and Scott Lancaster.

After Beverly pulled to within one, three minutes into the third, Cooper and Kyle Fulton answered with goals during a 1:23 minute span with 12:44 remaining.

Cooper is the Merchants’ top playoff scorer with six points and is tied with Antunes for the most goals with three apiece.

The best-of-three west division qualifying round for the Merchants featured wins of 3-2 in overtime and 6-2 against the sixth-place Spruce Grove Regals (5-30-3, 109 GF/259 GA).

The Merchants and Beverly split their season series with the Warriors winning twice by identical 8-3 scores and the Merchants prevailed 8-6 and 3-2 in OT.

The 6-3 loss to the North Edmonton Red Wings in Morinville left the best-of-five quarter-final series knotted at one game apiece.

Game five, if needed, is 8 p.m. Sunday at Londonderry.

The Jets were flying high after the losing game one in the best-of-three west division qualifying round to the Stony Plain Flyers 5-4 with OT victories of 7-6 on affiliate Cache Schiler’s goal in Morinville, the 4-3 series clincher by Josh Mcrae last Wednesday in Stony Plain and the first game against the Red Wings was decided by Ryan Denton’s power-play goal in Friday’s 2-1 decision at Londonderry.

Regan Regimbald, a CJHL second team all-star defenceman, opened the scoring in the first minute of the third period on the power play and the Red Wings evened the count with 1:42 left in regulation time.

Shots were 5-2 in OT and 38-32 overall for the Jets with Luke Hall between the pipes.

Game two was deadlocked at three apiece when the Red Wings notched the winner with 14:04 remaining.

Hayden Laporte lit the lamp in the first and in the third affiliate Graeme Hampton tied it at two with the man advantage and Schiler made it 3-3.

Josh Mcrae leads the Jets in playoff scoring with six goals and nine points and Regimbald is second with three goals and eight points.

The regular season winds up this weekend for the first-place St. Albert Slash on the Alberta Female Hockey League.

The three-time defending Esso Cup midget AAA national champions have a spot locked up in the AFHL's Frozen Four provincials, March 20 to 22 in Calgary, and the winner represents Alberta in the Pacific Region national qualifier against the B.C. champion in early April.

Last weekend on home ice, the Slash suffered two losses after regulation time by 2-1 scores in the shootout against the Rocky Mountain Raiders (16-8-4) and in overtime against the Pandas.

Jenna Goodwin’s’ league-leading 14th goal tied it at one late in the second period.

In the shootout, goals were 2-1 for the visitors with Goodwin connecting.

The OT winner by the Pandas was generated on the power play after they potted the equalizer with the man advantage in the middle frame.

Jaden Bogden put the Slash on the scoreboard 27 seconds into the second and Goodwin’s assist on the play was her AFHL-high 24th point.

Two teams in the blue and red pools qualify for the March 10 to 19 semifinals.

Tyler Fitka finished fifth in REM scoring with 48 points and was second on the Royals in goals with 20.

Tye Cameron led the team with 21 goals and Aidan Malinowski was second in points with 35.

Lucas Cadger tied for the most shutouts in league play with three despite a lower-body injury in the second half of the season.