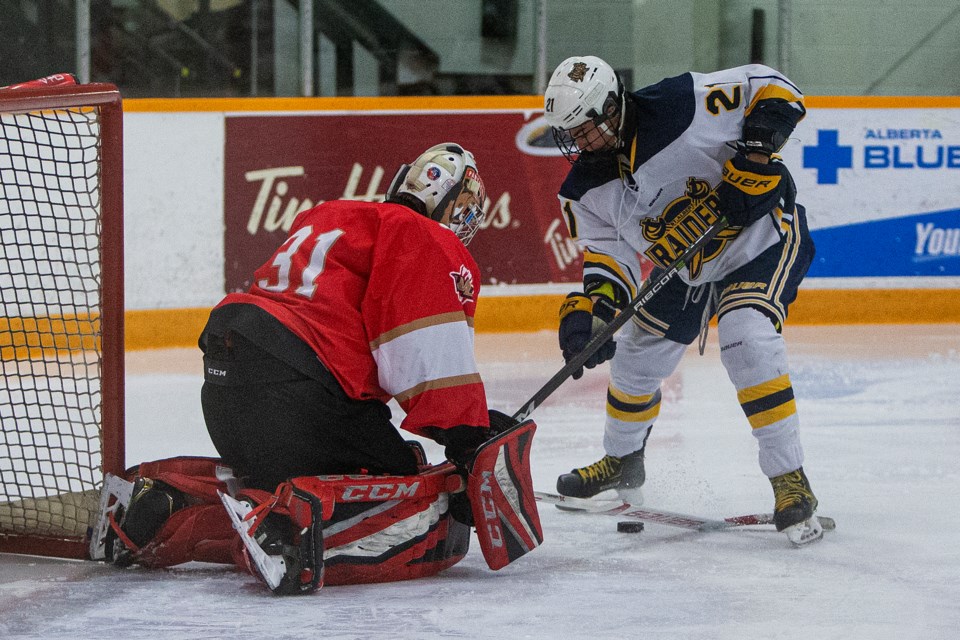 DIRECT ENCOUNTER – Kayden Jethon of the St. Albert Royals goes one-on-one against netminder Tyler Kohut of the Hockey Central Panthers of Sylvan Lake in the Rural & Edmonton Midget 15AA Hockey League. Tonight the Royals (8-9-6) are in Sherwood Park to play the Senators (10-11-3) at 8:30 p.m. The Royals are coming off ties of 3-3 against the Senators and 4-4 against the Strathcona Warriors (8-13-3) in the new year after the 4-3 loss to the Panthers (17-3-2) Dec. 22 in St. Albert. CHRIS COLBOURNE/St. Albert Gazette

The eighth shutout this season for the St. Albert Slash was also the 17th win in 19 games for the midget AAA team in the Alberta Female Hockey League.

Holly Borrett faced 15 shots while posting her fourth shutout in Wednesday’s 3-0 decision against the Edmonton Pandas (10-6-2) at Bill Hunter Arena.

Jenna Goodwin leads the AFHL in goals with 11 and is tied for second in scoring with 17 points.

Friday the Slash (17-1-1) played the Lloydminster Steelers (8-8-2) in the Border City and the score was unavailable at press time.

In the third period, Kendrick (5-4-2, 3.08 GAA) stopped 25 of 26 shots while Zakk Makeiff, Liam Cochrane (shorthanded) and Mason Comeau found the back of the net.

Cochrane’s goal was his 18th and 30th point and the winner by Comeau was scored with 70 seconds remaining.

Game info against the Oilers was unavailable at press time.

Meanwhile, the Crusaders are competing at the Fred McBeth Tournament in Regina this weekend and the team’s last league game was 7-2 against the Leduc Roughnecks (3-18) Jan. 3 in St. Albert.

In the NAMHL scoring race, Harroun is first in goals with 26 and second in points with 43.

Brett Reiter leads the Steel in points with 32 and Joshua Cyr is the team’s top scorer with 13 goals.