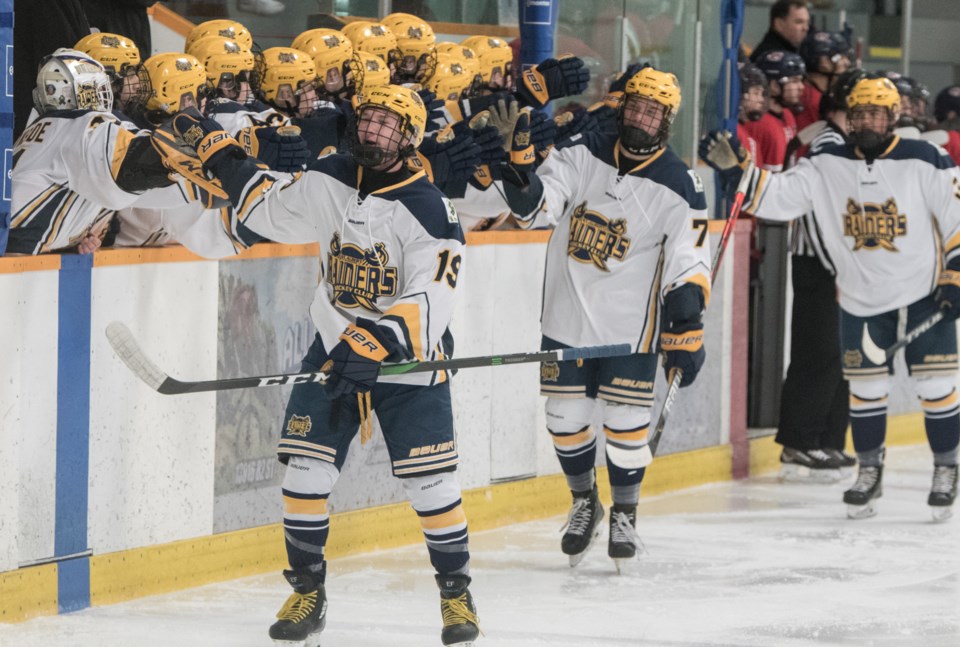 RAIDING THE WAY – Evan Forrest of the St. Albert Nektar Raiders leads the fly-by bench celebration after scoring the opening goal 54 seconds into game two of the best-of-five north division semifinal against the Canadian Athletic Club at Bill Hunter Arena. Forrest and linemate Koehn Ziemmer finished Saturday's 7-3 win with one goal and three points apiece. The Raiders swept the series in Monday's 5-2 victory at Jarome Iginla Arena. The No. 1 team in the Alberta Midget AAA Hockey League at 30-1-4 overall will play the Grande Peace Storm or Fort Saskatchewan Rangers in the best-of-five north final. JOHN LUCAS/St. Albert Gazette

The St. Albert Nektar Raiders continued their season-long domination in the Alberta Midget AAA Hockey League by sweeping the Canadian Athletic Club in the playoffs.

Monday’s 5-2 victory at Jarome Iginla Arena ended the best-of-five north semifinal as the Raiders improved to 30-1-4 in league and playoff action.

The Raiders will faceoff against the Grande Prairie Storm or Fort Saskatchewan Rangers in the best-of-five north final.

The Storm leads the semifinal series 2-1 with game four slated for tonight in Fort Saskatchewan.

In game two Saturday, Ziemmer and linemate Evan Forrest recorded one goal and three assists apiece in the 7-3 win at Bill Hunter Arena.

The series opener was 5-4 Thursday in St. Albert.

In the three games, the Raiders capitalized seven times on the power play and tallied twice on the penalty kill.

Andreai Proctor-Ramirez (3.50 GAA, .860 save percentage), the top AMHL netminder in the regular season for the No. 1 defensive team in the league, started the first two games and Carson Ironside backstopped the Raiders to victory in game three with 20 saves.

The St. Albert Gregg Distributors Sabres beat the SSAC Lions twice in overtime to advance to the next round in the Alberta Major Bantam Hockey League playoffs.

Ben Costantino scored in sudden-death in Sunday’s 3-2 series opener at Jarome Iginla Arena and Jaden Beauchamp completed the nitro north division playoff sweep in the extra period with his second goal of the contest in Monday's 6-5 decision at Millwoods Arena.

Evan Zazulak knotted game two at five apiece with his second of the night with 2:40 left in regulation time after SSAC struck three times in the third period to lead 5-4.

The Sabres also rallied in the third in game one on goals by Kieran Strauss and Adam Browton to pull even with SSAC.

The Sabres are 4-0 after two playoff rounds after going 24-6-3 in league play as the top team in the north for third overall in the AMBHL.

The next series for the Sabres is the best-of-five north conference final against the Lloydminster Bobcats (18-8-7) or Leduc Oil Kings (16-16-1).

The season is over for the St. Albert Merchants after the third playoff series loss in as many years to the Beverly Warriors in the Capital Junior B Hockey League.

The defending Founders Cup champions were on the brink of elimination before beating the Merchants by identical 4-3 scores Friday in St. Albert and Sunday at Clareview Arena to win the best-of-five quarter-final.

Beverly swept the Merchants the past two years in the quarter-finals.

Beverly won game one 5-1 in St. Albert and the Merchants replied with victories of 5-2 and 2-1 at the Clareview rink.

In game four, Beverly outscored the Merchants 3-2 in the middle frame to lead 4-2 and in game five potted the winner halfway through the third.

Three minutes earlier in the deciding match, Josh Antunes tallied his team-leading fifth goal of the playoffs and his second of the night on the power play to even the count at three.

Nate Reinhart (4-3, 2.82 GAA, .932 save percentage) played a major role in the Merchants’ playoff drive while Ryan Cooper led the team in points with nine and was second in goals with four.

The Morinville Jets dropped three straight to the North Edmonton Red Wings after winning the series opener in the Capital Junior B Hockey League quarter-final.

The Jets finished 3-4 in two playoff series and all the wins were decided after regulation time.

The St. Albert Flyers are seeded ninth out of 12 teams in the North Cup playoff tournament in the Alberta Minor Midget AAA Hockey League.

Four teams from the three pools qualify for Saturday’s semifinals and Sunday the two finalists and third-place winner advance to provincials, March 19 to 22 at Red Deer.

Flyers enter the playoffs with a 2-2-3 mark in the last seven games after Sunday’s 5-1 loss to the Bobcats in St. Albert.

LEADING THE CHARGE - Hayden Selin starts a rush out of his own end for the St. Albert Gregg Distributors Sabres against the SSAC Lions in the nitro north division playoffs in the Alberta Major Bantam Hockey League. The Sabres won game one 3-2 on Ben Costantino's overtime goal Sunday at Jarome Iginla Arena. The Sabres swept the best-of-three playoff in Monday's 6-5 OT decision as Jaden Beauchamp scored the winner at Millwoods Arena. Upcoming for the Sabres is the best-of-five north conference final against the Lloydminster Bobcats or Leduc Oil Kings.JOHN LUCAS/St. Albert Gazette