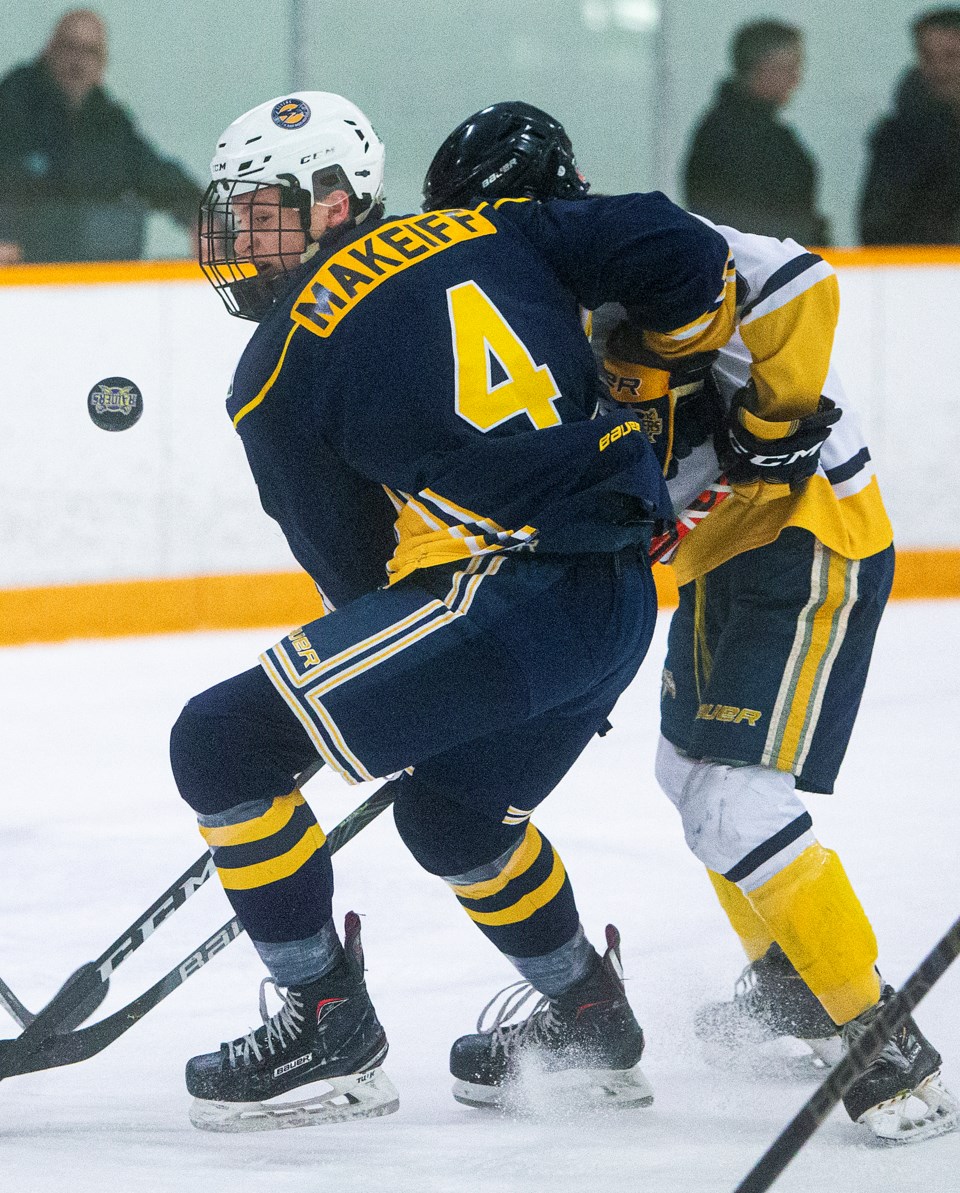 UP IN THE AIR – Zakk Makeiff tracks down a flying puck for the St. Albert Flyers in the Alberta Minor Midget AAA Hockey League. The first of two games between the midget 15 Flyers (9-10-6) and Fort Saskatchewan Rangers (13-6-5) goes tonight at 8:15 p.m. at Go Auto Arena. The rematch is 12:30 p.m. Saturday at JRC Arena. CHRIS COLBOURNE/St. Albert Gazette

Another win and another shutout for the St. Albert Slash.

Friday’s 2-0 decision against the Lloydminster Steelers was the second shutout in three days and the ninth this season for the midget AAA team in the Alberta Female Hockey League.

Mabel Maltais was tested 18 times while backstopping the Slash to their 18th victory in 20 games.

The Slash also killed off a slew of penalties in support of their netminder.

Maltais, a Slash rookie, is the AFHL leader in shutouts with five and wins with 11 without a loss.

Holly Borrett (7-1), a returning player from last year’s team that three-peated as Esso Cup national champions, is second in shutouts with four.

Captain Alli Reich scored the insurance marker in the third period and assisted on Kelsey Hall’s goal in the middle frame as the Slash finished with 35 shots against the Steelers (9-9-2) in the Border City.

The 14th game without a loss for the first-place St. Albert Nektar Raiders was Sunday’s blowout in Leduc.

Maddux Nollski, Ronin Pusch and Jaxon Dube also scored as the Raiders capitalized three times on the power play and once while shorthanded in the penalty-marred affair.

Gautier is tied for sixth in AMHL scoring with 28 points and Pusch leads the team in goals with 12, one more than Gautier and Dube.

The first two-game winning streak since November for the St. Albert Merchants ended a stretch of four consecutive losses in the Capital Junior B Hockey League.

Kyle Fulton's first goal as a Merchant was the difference in Friday’s 4-3 overtime result against the Spruce Grove Regals (3-24-3) at Grant Fuhr Arena and a pair by Ryan Cooper and Bryce Sturm propelled the Merchants (18-13) past the Sherwood Park Knights 7-5 Sunday at Jarome Iginla Arena.

Dovey’s tying goal against the Regals (3-24-3) with 1:35 left in regulation time set the stage for Fulton to score the OT winner 21 seconds into the extra period.

Marco Runco and Sturm also found the back of the net while Antunes and Corrigan registered two assists apiece.

Sturm and Cooper share the team lead in goals at 22.

The teams combined for 26 infractions for 92 minutes and the majority of the penalties were assessed in the opening period.

The Merchants have seven games left before the playoffs start with the best-of-three qualifying round.

The Merchants are three points ahead of the Flyers in the west standings.

In the CJHL scoring race, Cooper is tied for fifth with 50 points and Sturm is tied for 10th with 47.

The Morinville Jets faceoff against the North Edmonton Red Wings tonight in the Capital Junior B Hockey League.

The midget elite St. Albert Sharks skate into the exam break as the north division leaders in the Alberta Female Hockey League.

Regan Ackroyd’s three-point night included two goals and the first was potted on the power play to knot it at one with under six minutes left in the first period.