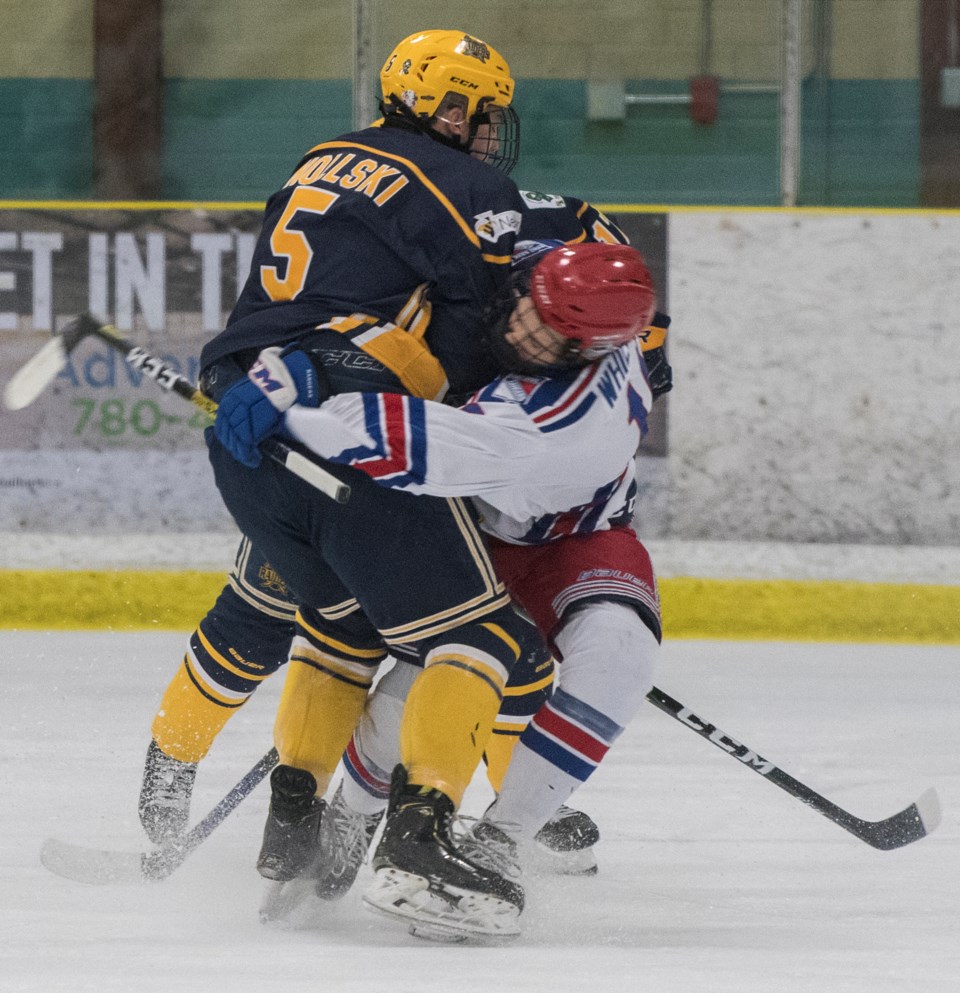 SMASH-UP - Maddux Nollski of the St. Albert Nektar Raiders collides with Ethan Whillans of the Fort Saskatchewan Rangers in the Alberta Midget AAA Hockey League. The playoff opener for the Raiders (27-1-4) is Thursday night at Jarome Iginla Arena, but the opponent and game time in the best-of-five north division semifinal weren't finalized at Tuesday's press deadline. The Raiders, last year's provincial finalists, are ranked first overall in the AMHL after finishing first in the north for the second consecutive season for a first-round bye. JOHN LUCAS/St. Albert Gazette

Tuesday’s results in the Alberta Midget AAA Hockey League playoffs will determine who the St. Albert Nektar Raiders will face-off against in the north division semifinals.

Scores between the Fort Saskatchewan Rangers (15-13-4) and Sherwood Park Kings (10-16-6) and the Lloydminster Bobcats (14-15-3) against the Canadian Athletic Club (11-15-6) in the fifth and deciding games in the north playoffs were unavailable at press time.

The series opener for the 2019 AMHL provincial finalists is Thursday at Jarome Iginla Arena and the start time, along with the rest of the series dates and locations, still had to be finalized.

The Raiders (27-1-4), ranked first in the AMHL playoffs, and the Grande Peace Storm (17-13-2) received first-round byes as the top two finishers in the north.

Tuesday’s score in St. Albert in game one of the best-of-three nitro north division semifinal was unavailable at press time.

The North Cup runs March 5 to 8 in Sherwood Park and three teams qualify for the AMMHL provincials.

The Sharks (16-6-1) are first in the north division by four points over the Lloydminster Steelers (14-8-2) with a game in hand.