Day one results for the Cardinals at the 13U Baseball Canada championship highlights Sports Extra
0
Aug 24, 2019 7:00 AM By: Jeff Hansen 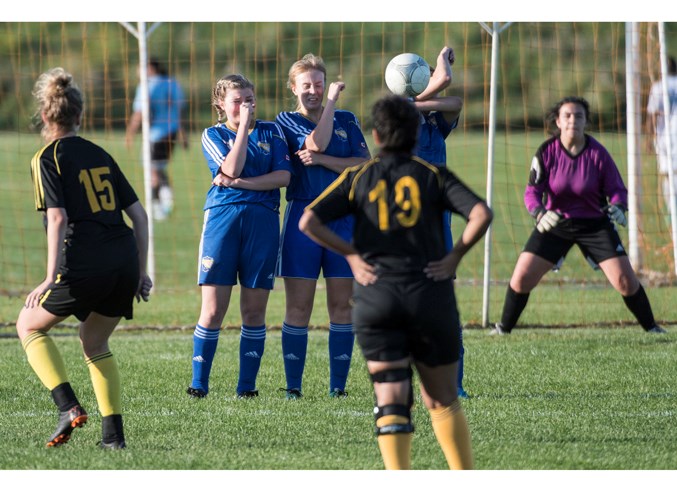 BALL BLOCKER – A St. Albert Impact player takes one for the team with a free kick to the head alongside Rene Takats and Caitlin Brenholen on the defensive wall in front of goalkeeper Paige Semeniuk in Tuesday's 8-1 rout of division 2B FC Excelsior 3 in the Tier II provincial playdowns at ESA Complex. Micheline Perrault tallied three times, Makenna Van Der Veen and Kiiya Husby potted a pair each and Julia McDougall scored her team-leading 16th goal for the division 2A Impact (12-2-3), the second Edmonton District Soccer Association rep for the Tier II provincials next weekend in Edmonton. Sherwood Park Phoneix 3 (13-3-1), the first-place division 1A team, forfeited today's provincial qualifier against the Impact. JOHN LUCAS/St. Albert Gazette

The St. Albert Cardinals split two games on day one of the 13U Baseball Canada championship at Repentigny, Que.

Thursday’s pool B scores for Team Alberta were the 8-2 loss to Ontario 2 and 7-6 walkoff win in an extra inning against Prince Edward Island.

Friday’s score against Quebec was unavailable at press time.

The last game for the Baseball Alberta 13U AAA Tier I champions before the crossover playoffs is against British Columbia today.

The tournament opener for the Cardinals was decided in the top of the fifth as Ontario pushed five runs across to make it 7-1.

Ontario out-hit the Cardinals 10-5 and racked up six stolen bases.

Nicholas Vandenberg stroked a double while Eric Hartman and Thomas Rankin each drove in a run.

Bazillion’s run-scoring single in the eighth inning against P.E.I. was also his second hit of the game and the team’s ninth.

The Cardinals trailed 4-3 before counting one in six and in seven both teams took turns scoring two runs a piece.

Michael Yusypchuk drew the start and during 3-2/3 innings of five-hit ball allowed four runs (two earned), including a homer, while fanning five and walking one.

Hartman cracked a solo home run in the first while going 2-for-3 with two RBIs and scored two runs, as did Vandenberg.

The Cardinals committed three errors and left seven men on base compared to five runners for P.E.I.

The Cardinals are the first 13U team from the St. Albert Minor Baseball Association to compete at nationals since the 2014 fourth-place finishers.

Prior to nationals, the team’s record was 32-5 after going 26-8 last year as silver medallists at westerns as provincial finalists.

The fastest 10-year-old in St. Albert finished third overall in the U19 male division at the Edmonton half-marathon Sunday.

Easton Herman’s time was one hour, 35 minutes and 44 seconds for 139th place overall as the 110th male finisher in the 21.1-kilometre event.

Herman ran five halves this summer for practise and his personal best before the race was 1:54.

The Games ended last weekend in Swift Current with Alberta on top of the medal standings with 299 – 129 gold, 92 silver and 78 bronze.

Alberta was joined by Saskatchewan, Manitoba, Northwest Territories, Yukon and Nunavut at the Games, which are held every four years.