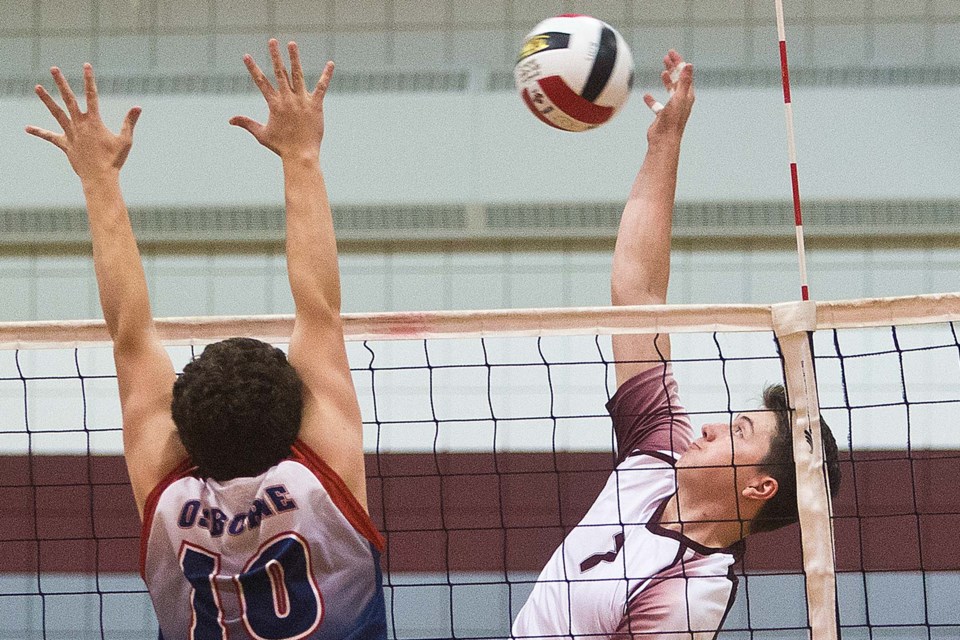 BRINGING IT – Zac Desranleau of the Bellerose Bulldogs unloads on the ball against the Lillian Osborne Legends (4-2) in Wednesday's metro Edmonton division two senior men's match at Bellerose. The sixth win without a loss for Bellerose (18 GW/3 GL) was 25-12, 25-17, 27-25. The next match is 6:30 p.m. Monday and the visitors are the Louis St. Laurent Barons (2-4). Bellerose is tied with the Strathcona Christian Academy Eagles (6-0, 18 GW/2 GL) for top spot and Wednesday the teams go head-to-head at 5 p.m. in Sherwood Park. Bellerose has six returnees on the roster from last year's 5-7 quarter-finalists. CHRIS COLBOURNE/St. Albert Gazette

The U15 National Cup kicks off Wednesday for the St. Albert Impact at Ivor Dent Sports Park.

The first match in group B of the 12-team tournament for the Alberta Soccer Association Tier I champions is 1:30 p.m. against Halifax County United.

The rest of the groupings are as follows:

The top two teams in each group advance to the championship round to determine the one to eight finishers and the third-place teams compete in the nine to 12 seeding bracket.

Visit canadasoccer.com for the link to the tournament website.

The Impact’s 19-1-2 overall record includes the 1-0 decision against Foothills in the provincial final Aug. 25 in Calgary.

The Impact joins the 2016 U14 Impact and 1989 U18 Cougars as the only male St. Alberta Soccer Association teams to win provincials for a national berth. The Cougars won gold in Edmonton and the U14 Impact placed fourth at Moncton, N.B.

The puck drops Sunday for the St. Albert Merchants in the Capital Junior B Hockey League.

The Merchants (2-2) started off the weekend against the North Edmonton Red Wings (3-2) and Friday’s score from Jarome Iginla Arena was unavailable at press time.

The Merchants were coming off Tuesday’s 8-5 loss to the Sherwood Park Knights (2-2) as the host team lit the lamp four times on 10 shots in the first period and the fourth goal was scored shorthanded with 2:55 left in the frame.

Zach Giacobbo and Stuart Dovey (power play) cut the deficit in half in the second before the Knights made it 5-2 with seven seconds remaining in the period and potted three straight in the third.

Dovey and Ryan Cooper closed out the scoring and Cooper’s goal was his fifth of the season and fourth point of the night.

Cooper entered the weekend tied for second in the CJHL scoring race with 12 points.

Wilson and the Brezovskis are members of the Glendale Golf & Country Club and this year at the club championships Wilson repeated as the top junior male and Brooke was No. 1 in the ladies' division after winning the junior female title last year.

Seventy teams are bringing it to the 21st annual Turkey Ring next weekend.

Visit stalbertringette.com for the tournament draw.

Last year’s Turkey Ring consisted of 74 teams and 21 were from SARA.