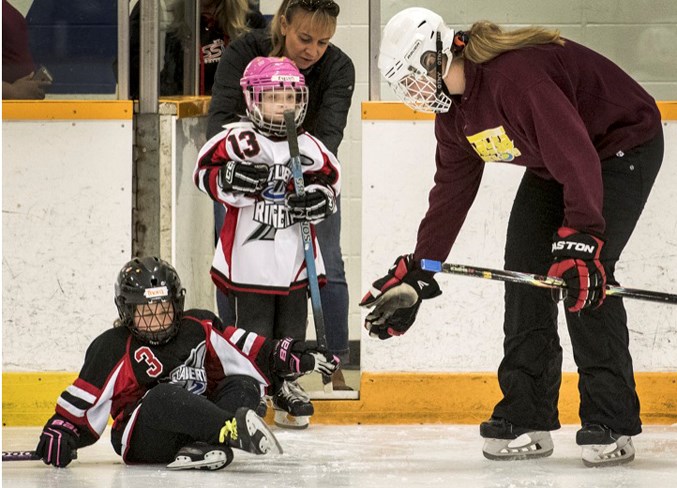 GIVING IT A GO – Four-year-old Thora Tokar falls to the ice while Evelyn Boon, who is also age four, makes her first foray onto the ice at last month's try ringette event hosted by the St. Albert Ringette Association at Troy Murray Arena. Volunteer Jazmin Pitruniak, a ringette player, tries to lend a helping hand to the newbies to the sport. DAN RIEDLHUBER/St. Albert Gazette

The teams skated Wednesday at Go Auto Arena with the Slash winning 4-1.

As of Thursday, the Slash had three netminders, eight defencemen and 14 forwards at camp.

Upcoming for the Slash is a 16-team midget AAA Calgary Firestarter Tournament next week at Great Plains Arena and in pool C the Slash play the Regina Rebels, Fraser Valley Rush and Northern Alberta Xtreme.

The Slash plans to take three netminders, 13 forwards and seven defencemen to Calgary.

The last exhibition game for the Slash is Sept. 21 in Red Deer against the hometown Chiefs.

The AFHL season opener for the winners of three-straight Esso Cup national championships is Oct. 4 against the Lloydminster Steelers at 8 p.m. at Go Auto Arena.

Last year Brezovski was the junior female winner at the Glendale after her 2016-17 junior repeat at Sturgeon Valley.

At the end of the month, Brezovski, her sister Belle, last year’s Sturgeon Valley junior female champion, and Wilson are competing at the Future Links Fall Series tournament at Crown Isle Golf Resort in Courtney, B.C.

Leading up to the Golf Canada event for Brezovski is the metro Edmonton zone tournament Sept. 17 at Stony Plain Golf Course for qualification at the Alberta Schools’ Athletic Association championship Sept. 23-24 at Red Deer.

Last year in Grade 10, the St. Albert Skyhawk finished fourth overall (75-80) out of 69 females at the high school provincials after shooting an 82 at zones in Stony Plain.

The St. Albert Impact U17 female team closed out the outdoor season with a fourth-place result at the recent Alberta Soccer Association Tier I championship tournament in Calgary.

The Impact were hampered by injuries at the eight-team competition.

The three St. Albert Mission teams have been finalized for the upcoming ringette season.

Visit stalbertringette.com and click on AA tryouts for the rosters.

This past week marked the first practice sessions for the teams following the AA evaluations.

Last season the U14AA Mission finished fourth at westerns in St. Albert as the provincial runner-up while the U16AA and U19AA teams were unsuccessful at provincials to qualify for nationals.

Meanwhile, the St. Albert Ringette Association hosts its 21st annual Turkey Ring Oct. 11 to 14. Last year’s event featured 74 teams, including 21 SASA reps,  in 14 age divisions from U10 to U19. The 127-game schedule was staged at seven rinks over four days.