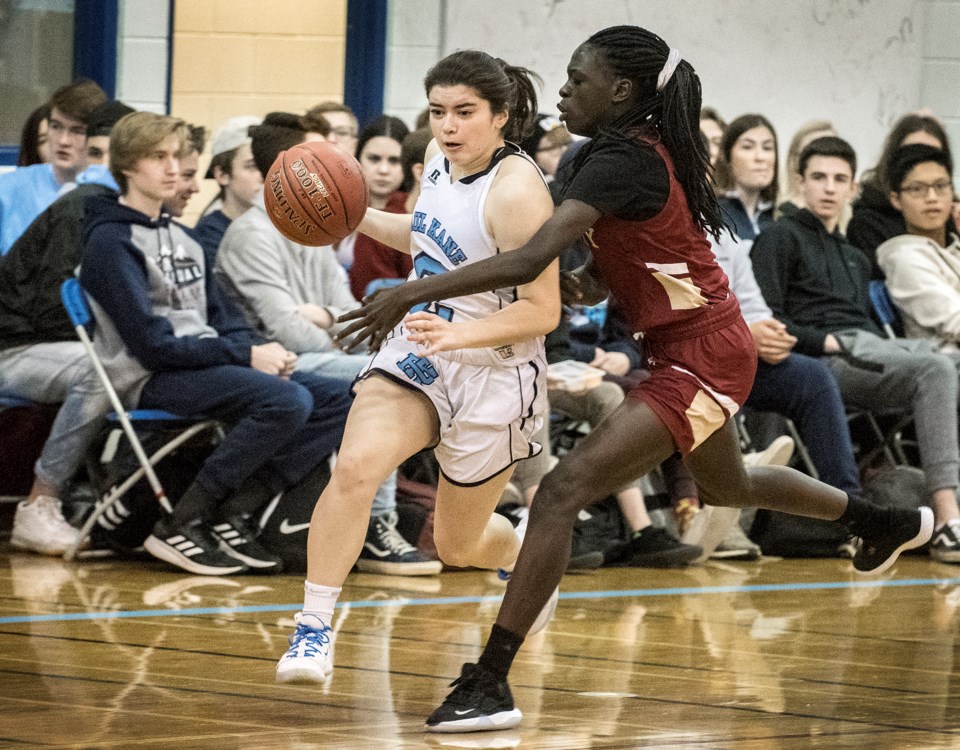 FRONT-RUNNER – Elizabeth Salcedo of the Paul Kane Blues pushes the the ball past Alouet Agar of the O'Leary Spartans at last month's Paul Kane Invitational Tournament. The Blues are 3-3 in the metro Edmonton division one league and 11-7 overall after losing 77-75 to the Strathcona Lords (5-3) this week at Paul Kane. The next game for the No. 9-ranked 4A team in the province is Monday against the host St. Francis Xavier Rams (4-3) at 5:30 p.m. DAN RIEDLHUBER/St. Albert Gazette

The St. Albert Skyhawks continue to pile up the points as the defending 4A provincial women’s champions.

The third game in four days the Skyhawks reached triple digits in scoring was Thursday’s 115-36 bombardment of the Archbishop Jordan Scots in the tournament opener at the Father Michael Troy Basketball Classic at St. Joseph High School.

Annacy Palmer drained a game-high 20 points in the 19th win in 20 games this season for the No. 2-ranked 4A team in the province.

A win would send the Skyhawks into tonight's 6 p.m. final against the Bishop Carroll Cardinals of Calgary or Marburg of Germany.

After averaging 86 points in three wins as the tournament champions at the St. Mary’s Saints Senior Classic last weekend in Calgary, highlighted by the 91-66 romp over the No. 1-ranked 4A Western Canada Redhawks, the Skyhawks resumed the metro Edmonton division one schedule as the visiting team with whopping results of 115-40 against the Leduc Tigers (3-5) Monday and 104-40 against the St. Peter the Apostle Spartans (1-6) of Spruce Grove on Wednesday. The Spartans are listed third in the 3A provincial rankings.

The next league game for the Skyhawks, 7-0 as the division one champions the last two years, is 5:30 p.m. Monday against the host O’Leary Spartans (4-2).

Meanwhile, the Skyhawks men’s team lost its first game at the Troy Classic by a whopping 99-36 margin against Holy Trinity of Okotoks.

Friday's score against Glenmary of Peace River in the consolation bracket was unavailable at press time.

The result would determine if the Skyhawks play Marburg of Germany or Assumption of Cold Lake today at 12 noon or 2:30 p.m.

Paul Kane is tied for second at 6-2 and the Skyhawks are seventh at 3-4.

Wednesday’s results were 76-52 for Paul Kane over the visiting Spruce Grove Panthers (5-2) and the 90-66 loss for the Skyhawks as the visitors against the M.E. Lazerte Voyageurs (6-2).

The Bellerose Bulldogs have home-floor advantage next week in the metro Edmonton division two women’s league.

The first loss for Bellerose in division two was 59-47 against the Strathcona Christian Academy Eagles (7-1) of Sherwood Park on Wednesday. The Eagles are the sixth-ranked 3A team in the province.

Bellerose entered the game as the finalist at the Archbishop MacDonald tournament.

Injuries played a role in the outcome as Bellerose had nine players dressed for the final and seven finished the game.

Tournament scores were not made available to the Gazette.

Meanwhile, the 1-6 Bellerose men host Facey (1-7) Monday at 5 p.m. and the result will determine last place in the 12-team division two standings.