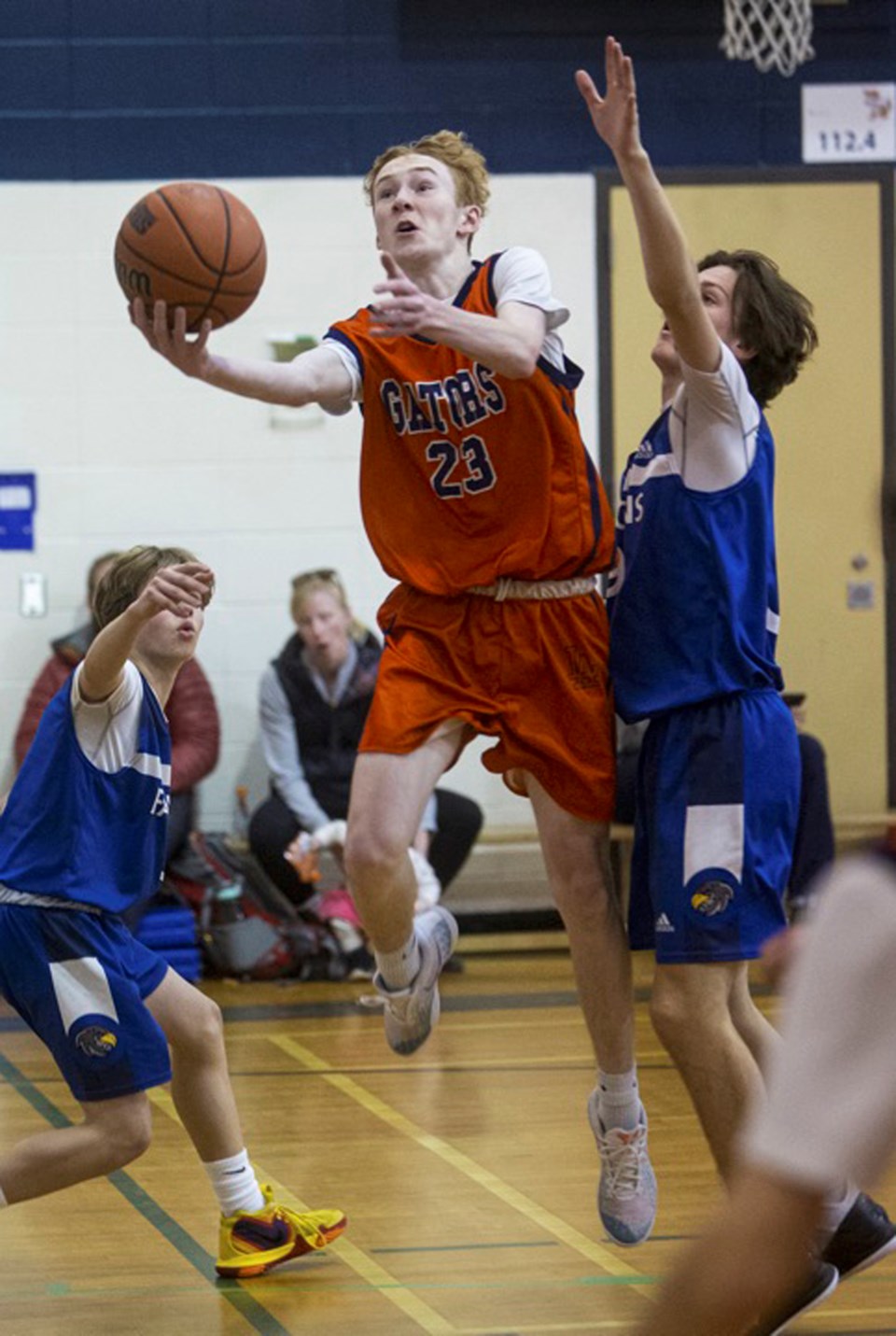 WINGING IT – Austin Walter of the Lorne Akins Gators splits the defensive coverage of Nick Valerio and Dylan Marple of the Richard S. Fowler Falcons in Tuesday's Tier I semifinal in the St. Albert Physical Education Council junior high league. Walter racked up 30 points in the 84-68 win against Fowler (6-4), the SAPEC champion the last two years. Thursday's final between the Gators (10-0) and Morinville Wolves (7-3) starts at 7 p.m. at the SkyDome. CHRIS COLBOURNE/St. Albert Gazette

The Skyhawks march into their second final in as many years with convincing playoff victories of 91-28 against the St. Peter the Apostle Spartans (2-7) of Spruce Grove and 107-32 against the Lillian Osborne Legends (5-5).

The Paul Kane Blues and Bellerose Bulldogs hooped it up at the metro Edmonton championships Friday.

In league play, Paul Kane dropped a 67-62 decision to the Eagles, the fifth-ranked 3A team in the province, Jan. 8 in Sherwood Park and Bellerose lost 66-44 Feb. 12 in its home gym with a depleted lineup against MacDonald.

Wednesday’s semifinal scores were 85-67 for Paul Kane against the host Spruce Grove Panthers (10-3) and 72-61 for Bellerose against Strathcona Christian Academy (11-2), ranked ninth in 3A, in Sherwood Park.

In last year’s finals, Paul Kane suffered a 71-69 setback to the Holy Trinity Trojans to finish 13-1 in division two and 21-3 overall and Bellerose (12-2) defeated the J. Percy Page Panthers 53-34 for the division three championship after losing the last two finals in that league.

The Paul Kane Blues must win two games next week to qualify as the fifth metro Edmonton division one women’s rep at the 16-team 4A provincials.

Paul Kane is 16-11 overall after losing the division one quarter-final 75-66 against the No. 9-ranked 4A Salisbury Sabres (9-4) in Sherwood Park.

In the third and last 4A rankings before the March 19 to 21 provincials in Lethbridge, Paul Kane is unranked after going from ninth to an honourable mention.

The Tigers and Rams are also unranked and O’Leary is an honourable mention.

Tipoff is 5:30 p.m. against the Louis St. Laurent Barons at the SkyDome.

The division two Skyhawks (3-8) and division three Barons (3-8) finished out of the playoffs in their respective leagues.

The two finalists in the eight-team qualifier tournament advance to provincials, March 19 to 21 at Strathmore. 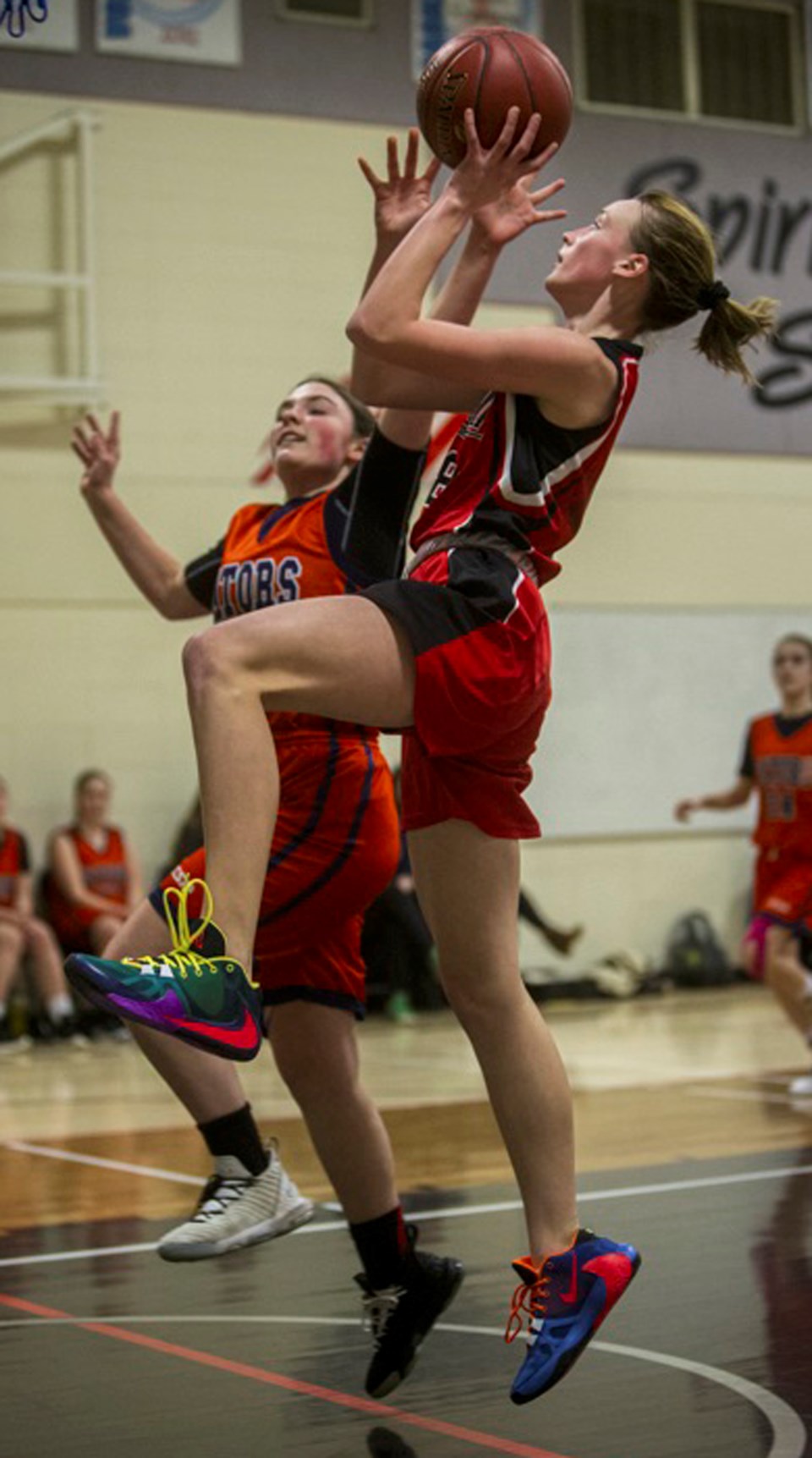 SCORING CHANCE – Jayci Chase of the Sir George Simpson Voyageurs takes it to the hoop against Kristen Guppy of the Lorne Akins Gators in Tuesday's Tier I semifinal in the St. Albert Physical Education Council junior high league. The score was 56-28 for Simpson. Thursday's final between Simpson (9-1) and Richard S. Fowler Falcons (9-1), the three-time defending champions, tips off at 5:30 p.m. at the SkyDome. CHRIS COLBOURNE/St. Albert Gazette