St. Albert's Raiders and Sabres in the thick of playoff action 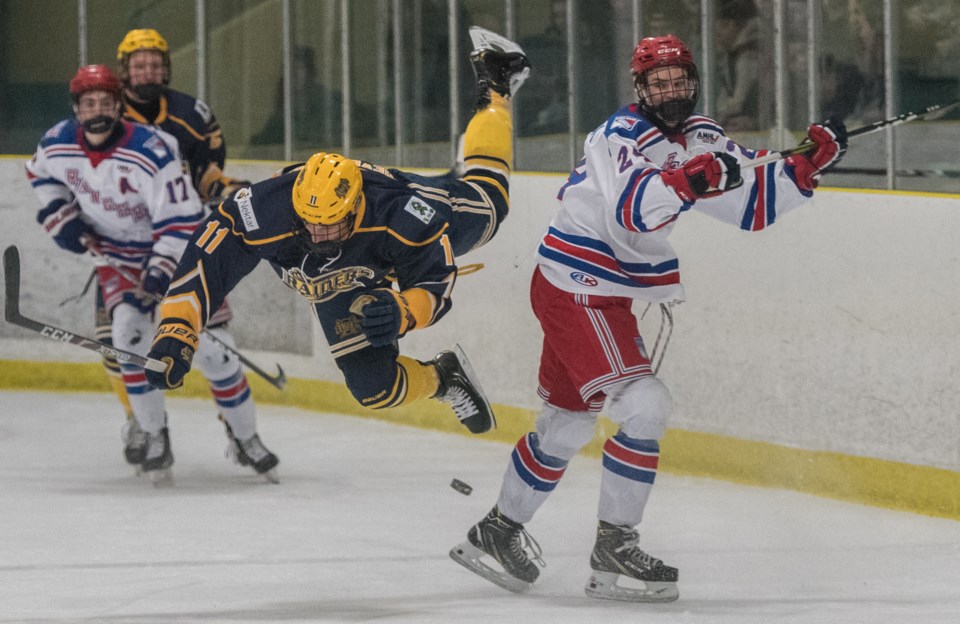 TRIP ON THE WILD SIDE – Ty Cheveldayoff of the St. Albert Nektar Raiders (31-1-4) is sent flying by Spencer Florchuk of the Fort Saskatchewan Rangers (21-18-4) in Sunday's playoff opener in the north division final of the Alberta Midget AAA Hockey League. Andreai Proctor-Ramirez stopped a game-high 36 shots in the 7-0 blowout in St. Albert. Game two in the best-of-five series was played Tuesday in Fort Saskatchewan and the score was unavailable at press time. Game three is 7 p.m. Thursday at Jarome Iginla Arena. JOHN LUCAS/St. Albert Gazette

The St. Albert Nektar Raiders started off the north division final with a bang in the Alberta Midget AA Hockey League playoffs.

Tye Pedersen also chipped in with three assists as the Raiders improved to 31-1-4 in league and playoff action.

Game two was played Tuesday in Fort Saskatchewan and the score was unavailable at press time.

The winner plays the Calgary Buffaloes, the top team in the south division at 26-5-5 overall, or the Calgary Flames in the best-of-five AMHL provincial final.

The Alberta champion advances to the best-of-three Pacific Region national qualifier against the British Columbia rep for the right to compete at the Telus Cup in April at Saint-Hyacinthe, Que.

The only St. Albert team to win the AMHL provincials was the 1990 Eagle Raiders, the fourth-place finishers at nationals.

The Raiders are headed in the right direction towards returning to the final after losing three straight to the Buffaloes last year – the first two games were decided in overtime, including the penalty shot winner in the opener – after polishing off the Rangers with four goals on 12 shots in the third period.

The Raiders registered 39 shots while connecting twice on the power play in the chippy affair.

Proctor-Ramirez (2.23 GAA, .919 save percentage) was making his first start after backstopping the Raiders to two victories in the best-of-five north semifinal against the Canadian Athletic Club and in game three Carson Ironside was in net for the playoff sweep.

The Rangers were coming off their second consecutive game five series victory in the playoffs in Friday’s 4-3 overtime decision against the host Grande Prairie Storm after going the distance against the Sherwood Park Kings.

The season series between the north finalists were wins of 4-2 and 4-3 for the Raiders last month.

After four playoff games, Ziemmer led the Raiders in scoring with five goals and 11 points and Forrest, his linemate, was second with eight points with a team-high seven assists.

Two losses in a row have the St. Albert Gregg Distributors Sabres teetering on the brink of elimination in the Alberta Major Bantam Hockey League playoffs.

The Lloydminster Bobcats posted victories of 4-1 Sunday in the Border City and 4-3 Monday in St. Albert for the 2-1 series lead in the best-of-five north conference final.

The teams faceoff tonight in game four at 7 p.m. in Lloydminster and game five, if needed, is 6:30 p.m. Thursday at Mark Messier Arena.

The winner advances to the best-of-five AMBHL provincial final against the Red Deer Rebels and Calgary Flames.

Special teams decided game three as the Bobcats tallied twice on the power play 30 seconds apart in the middle frame for the 3-2 lead and also potted a pair of shorthanded markers.

Adam Browton in the first period, Evan Sundar (power play) in the second and Jamie Visser with 63 seconds remaining in regulation time replied for the Sabres.

The Bobcats evened the series by slotting three unanswered goals in the opening period of game two.

Special teams victimized the Sabres for one goal on the power play and another on the penalty kill.

Sundar lit the lamp in the second.

The series started with the third consecutive overtime playoff victory for the Sabres as Sundar’s second goal of the night was the 5-4 winner 33 seconds into sudden-death Friday in St. Albert.

Sundar’s first goal in game one made it 3-1 on the power play with 7:48 left in the second.

Hayden Selin, Browton (power play) and Kieran Strauss also found the back of the net.

The shot count was 30-26 for the Sabres and Roberts was between the pipes.

Sundar is second in the AMBHL playoff scoring race with 10 points while leading the Sabres in goals with five.

Crandell is second on the team in points with seven. 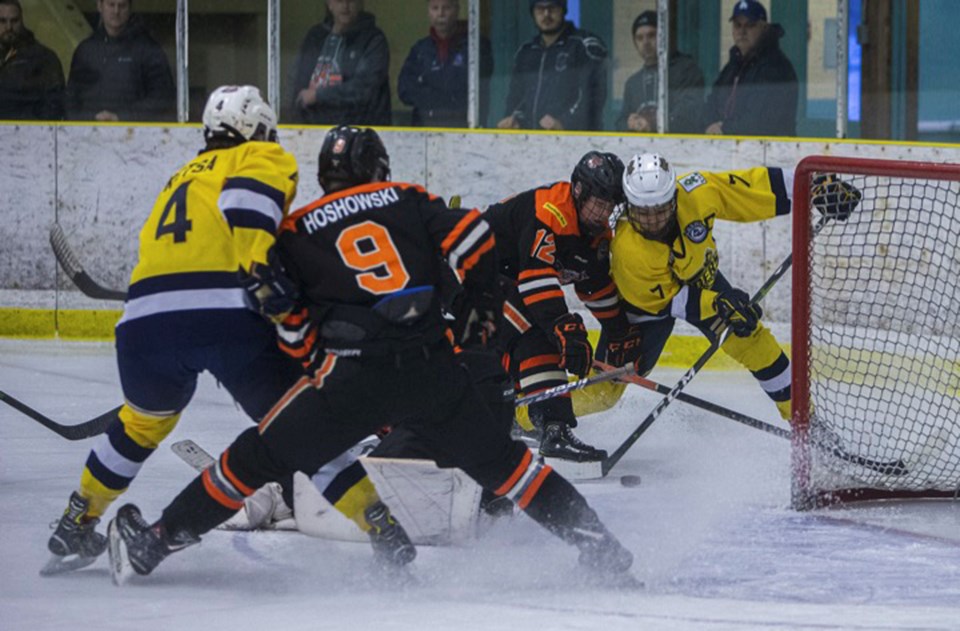 PLAYOFF ACTION – Carmelo Crandell of the St. Albert Gregg Distributors Sabres battles for the loose puck in Monday's 4-3 loss to the Lloydminster Bobcats in game three of the best-of-five north conference final in the Alberta Major Bantam Hockey League. The Bobcats struck twice on the power play and potted two shorthanded goals to grab the 2-1 series lead. Game four goes tonight at 7 p.m. in Lloydminster and game five, if needed, is 6:30 p.m. Thursday at Mark Messier Arena.CHRIS COLBOURNE/St. Albert Gazette