How libraries evolve with the communities they serve

What does a library represent? To some, it’s a centre for knowledge. For others, it’s all about fantasy and escaping to a distant world. Others might say it’s all about having a quiet place to work. But a library is all these things and so much more. 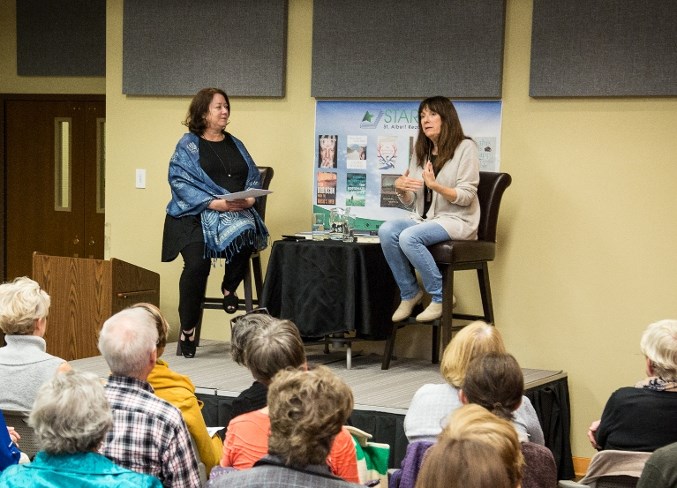 What does a library represent? To some, it’s a centre for knowledge. For others, it’s all about fantasy and escaping to a distant world. Others might say it’s all about having a quiet place to work. But a library is all these things and so much more. A library cannot be defined by a single idea or constrained to isolated needs. A library is an evolutionary institution that grows with its community, and that’s the message Kate Pearce, granddaughter of the legendary Lois Hole, drove home in her Oct. 3 speech. “Libraries — like public education or access to medical care or basic human rights — are not issues that can be measured by a war of paper and politics,” Pearce said. “They are issues that matter irrespective of political preference or socio-economic status. “They matter because they affect our children, our parents and ourselves. They matter not because they are questions of who is right; they are, simply put, questions of the right thing.” Libraries are the backbone of communities. As evolutionary spaces, cities plan for libraries and their expansion years in advance. St. Albert’s current facility opened its doors in St. Albert Place in 1983, but the city had envisioned the need for a branch library in 1980. The Civic and Cultural Centre: A People Place says a library of 36,400 sq. ft. will meet the city’s needs until 1995, after which expansion will be through branch libraries. The city’s current library occupies a space smaller than the then-anticipated 36,400 sq. ft., coming in at a gross area of 27,000 sq. ft. After 1995 came and went with no new branch library, the City of St. Albert started talking about building a branch library in 1999. After the Oct. 16 municipal election comes and goes, the future of St. Albert’s new branch library will be a bit clearer, but the vision of what St. Albert needs will be there regardless of the decision. St. Albert is growing. And Pearce says Lois Hole’s community deserves to have a library that grows with the community. “We all want our city to be an inclusive, accessible, united municipality,” Pearce says. “We all believe in a prosperous and flourishing community. And that, more than anything else, is the critical importance of libraries. “So, what would Lois do? I can tell you this much: she would do the same thing she has always done when faced with vocal opposition to her inherent value system. She’d stand up, change her rubber boots for sneakers, brush the dirt off of her hands into the sink, roll her eyes and say, ‘Oh, for god’s sakes,’ and then she’d go vote yes for the library.” For more information on the timeline of the proposed branch library, visit http://www.yesforthelibrary.ca/timeline.

NABI: An Incubation Facility to Grow your Business Sustainably
Apr 5, 2021 6:00 AM