How virtual reality brings St. Albert parties to the next level

You open your eyes and the first thing you see is a bomb. There’s a clock on the top-right side of the unit. It’s ticking down. But then you hear a sound. Your colleagues are asking you questions about what you see. 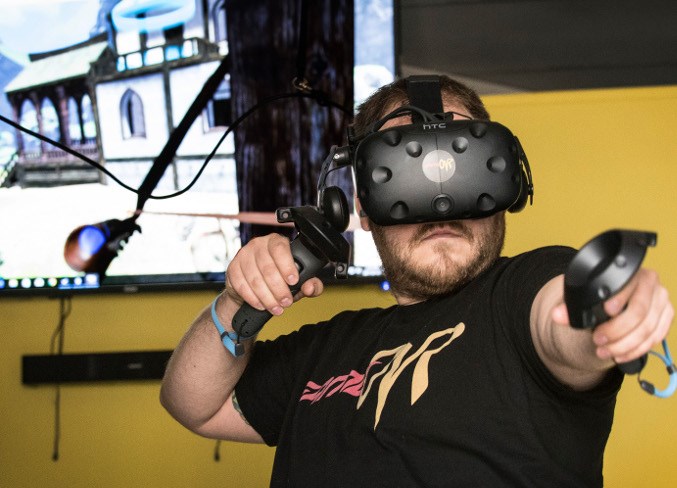 Eric Roberge, co-owner of GameOVR, plays a bow and arrow game at the virtual reality arcade in St. Albert July 31, 2017. A flat screen monitor in back helps spectators see what the gamer is seeing.

You open your eyes and the first thing you see is a bomb. There’s a clock on the top-right side of the unit. It’s ticking down. But then you hear a sound. Your colleagues are asking you questions about what you see. Only you can see the bomb, and if you give them the right information, you’ll be fine. Ten seconds go by. A minute passes. You diffuse the bomb—or maybe you explode. Regardless of the outcome, you see happy faces when you pull off your headset. The chaos is over and everybody had fun. This is virtual reality, and your coworkers are celebrating another successful year of work at your annual Christmas party. Virtual reality is the year’s big craze. Last year teams were learning to build trust through escape rooms, but now virtual reality is on everybody’s mind. “There’s a lot of activities for teams within virtual reality,” Eric Roberge, owner of St. Albert’s Game OVR, says. “Virtual reality offers new experiences and a new trend. If you don’t want to play a zombie game, you can check out Google Earth and walk the streets of Paris.” You can still do the escape room, Eric says, but this time you might do it in VR. It widens your possibilities and Game OVR is dedicated to giving everybody something to enjoy. “We cater to everyone. Not everybody is going to enjoy go-karting,” he says. “We find pride in offering options that are suitable for everybody, and we have a lot of options for parties.” Game OVR is independently owned and home to Canada’s biggest virtual reality play spaces. They only use the best-of-the-best technology, and everything is thought out to provide a welcoming environment. “When we were testing equipment, we found issues with the foam,” Eric says. “It was absorbent and we were concerned it might cause hygiene issues. We invested in leather pads to make it easy to clean and comfortable to wear. “We also thoroughly disinfect them with a botanical disinfectant. It’s specifically designed for people with sensitive skin or severe allergies—we’ve never had any reactions.” Eric says he and his wife test out the products to ensure there won’t be any motion sickness because of use. “The biggest question we get asked is ‘will it make me sick,’” he says. “But our equipment was purchased to be lag-free. The number one issue people have with motion sickness is a result of lag, and we test everything on our equipment to make sure that won’t be a problem.” Eric and his wife, Stephanie, even went as far to install retractable cable holders in the ceiling of play areas to make sure there wasn’t any hazard to disrupt people’s gaming. And their play spaces are also equipped to handle parties of any size, thanks to their one-of-a-kind deluxe rooms. “Gaming has always been about community,” Eric explains. “Some of our fondest memories with games are sitting on couches and spending time with friends around a TV. “We really want to focus on bringing people together. The best thing about arcades growing up was spending time together to cheer on a friend or slay monsters together.” That’s what led the pair to make deluxe rooms, where groups can spend time together and cooperate with games, such as Keep Talking and Nobody Explodes. In that game players outside of the headset try to talk their friend through disarming a ticking time bomb, but only the headset user can see what’s going on. “We also have families come through to share a deluxe room,” Eric says. “It’s set up like a living room and you could have a six-year-old girl happy playing Job Simulator or Fruit Ninja, and a 14-year-old boy who wants to who wants to shoot zombies. “And you might have grandma and granddad who want to take a trip down memory lane and stand next to Niagara Falls. That’s the advantage of VR deluxe rooms.” Game OVR has more than 30 titles in its library geared for users aged five and up. Game OVR has started booking for team building sessions for the holiday season and is continuing to book for birthday parties. Eric and Stephanie also offer gift certificates—perfect for stocking stuffers for the holiday season. Check out their website online at http://gameovr.ca/ to see how virtual reality can help build communication, problem-solving, and decision-making skills.