On Westminster Bridge in London, a porkpie hatted man in a vest and loose bowtie sits while reading a newspaper. It’s 9 o’clock in the morning, according to the timepiece on Big Ben, right next to him. A red double decker bus putts past.
Nov 27, 2014 12:00 AM By: Scott Hayes 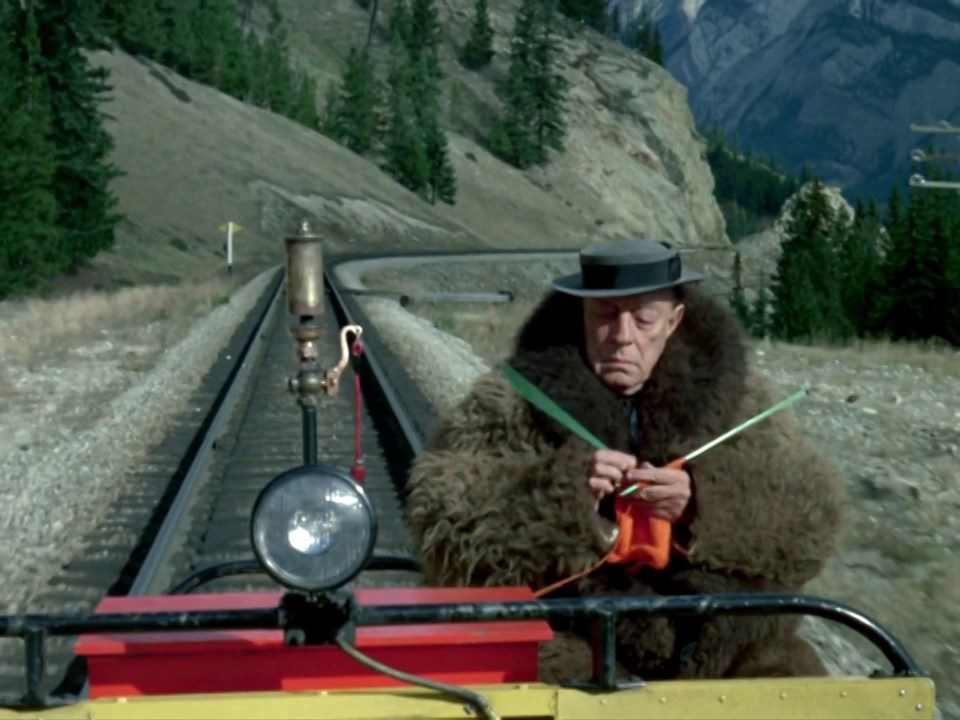 What could be better than a knitter in a bison hide coat on a railway speeder car in the middle of the Rockies? If only there was a spot of tea to be had

On Westminster Bridge in London, a porkpie hatted man in a vest and loose bowtie sits while reading a newspaper. It’s 9 o’clock in the morning, according to the timepiece on Big Ben, right next to him. A red double decker bus putts past.

The man sees a prominent advert on the page, telling everyone “SEE CANADA NOW!” He immediately has visions of Mounties, moose and bison, dancing Indians and dogsledding Inuit, and lumberjacks logging all the livelong day.

Utterly convinced, he folds the paper and tosses it, takes up his umbrella and jumps feet first off the bridge into the river 20-feet below. Thank God he’s Buster Keaton, or he might otherwise have been hurt in the plummet.

This is The Railrodder, a 1965 National Film Board short film that is as much a tribute to the beauty and industry of the Great White North as it is a loving testament to the inimitable Buster Keaton. After his precipitous dive over the precipice, we cut to the other side of the Atlantic Ocean, where a soaked yet utterly expressionless Keaton emerges onto a Canadian beach sans his trademark hat. He spots a CN rail sign that directs him down the tracks toward the Pacific Ocean and the West. 3982 ½ miles, it says, reminding us of our long-lost imperial measured roots.

With sea-slogged shoes, the Great Stone Face starts sloshing off on his quest, soon stumbling upon a motorized railway-track speeder, one of those open topped vehicles that track maintenance folk ride on to quickly get from point A to B. He accidentally sets it off when he flourishes his arm back to rest his head.

And thus, he sets off on his cross-country extravaganza, even finding a fresh topcoat and a new porkpie hat in the storage bin.

This short film from director Gerald Potterton (Heavy Metal) stars the famed silent film genius of daring stunts in one of the last movies of his long career. As the titular railrodder, Keaton crosses Canada from east to west on a railway track speeder. True to his genre, the film is full of sight gags as our protagonist putt-putts his way all the way to the coast of British Columbia.

Not a word is spoken throughout either, the only sounds being the peppy score by Eldon Rathburn and the sound effects of a train. Keaton is just as spry and ingenious at fetching laughs as he was in the old days of the silent slapsticks. This is an endearing and enduring thing of beauty, a physical comedian a bit past his prime but still chugging along, never missing a step.

In typical Keaton fashion, he experiences a series of near-misses with automobiles and trains, fixing a stalled speeder in the middle of a roundabout bridge, only to start his vehicle back up just as the bridge resets and the tracks line up. He slapsticks his way through an empty oil can for the squeaky wheels as he passes by huge refinery stations, and retrieves an endless supply of clothing, goods and tools from the car’s modest storage bin. There are cleaning supplies, photography equipment and a plentiful picnicking package down in that magic red box.

Keaton was adamant that the filmmakers keep shooting until he said, ‘Cut!’ or he was killed. Most of his stunts are perhaps tamer than some of his earlier films (consider his famous collapsing building frame from Steamboat Bill Jr. where he stands in the perfect spot of an open window, the wall crushing the ground all around him) but what can you say, he was only about 70 at the time.

How could anyone not enjoy his antics and pratfalls as he sees the sights from Parliament Hill to the grain elevators to the Rocky Mountains and all points in-between, stopping to prepare and serve himself a spot of tea while in open-air motion? It is a comedy, a travelogue, a postcard and a love note all wrapped up into one. Moreover, it’s the perfect counterpart to The General, perhaps his most brilliant feature film about a young man attempting to save his one true love amid the strife of the American Civil War. There’s a train in that one too.

What’s more, there is a companion piece to the project for all those true blue, die-hard Buster Keaton fans out there.

Buster Keaton Rides Again is a behind the scenes documentary that offers a rare glimpse into his private life as he and his wife travel from stop to stop a mari usque ad mare along with the film crew. It’s one of the few chances – if not the only chance – to actually hear the legend’s voice. Considering that he also died within a year of the film’s completion, it’s also a fitting tribute to the actor who let his work speak for itself for the vast majority of his career.

The great news is that the National Film Board of Canada offers both of these short films for free online viewing. You can totally check them out right now at www.nfb.ca/film/railrodder and www.nfb.ca/film/buster_keaton_rides_again. Albert Ohayon, one of the NFB's writers and its English film collection curator, even put up a fine blog of his own about Buster and the two shorts. You can read that here: blog.nfb.ca/blog/2009/12/11/buster-keaton-rides-the-rails-in-canada. You're welcome.

Special thanks to the National Film Board of Canada for making The Railrodder in the first place. You're my favourite national film board in all of Canada! I'm not even kidding!