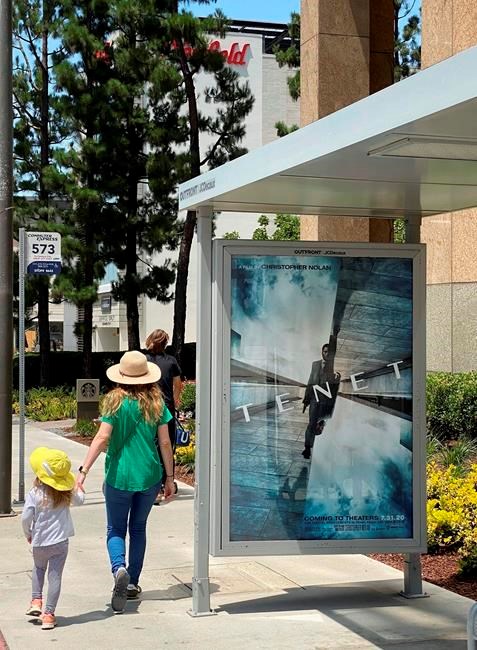 NEW YORK — Christopher Nolan's “Tenet,” which had hoped to herald Hollywood's return to big theatrical releases, has yet again postponed its release due to the ongoing coronavirus pandemic.

Warner Bros. said Monday that “Tenet” will not make its August 12 release date. Unlike previous delays, the studio this time didn't announce a new target for the release of Nolan's much-anticipated $200 million thriller.

“Tenet” had already shifted from July 17, then July 31 and then Aug. 12. Nolan, a staunch advocate for the big-screen experience, has strenuously hoped that “Tenet” could lead the resumption of nationwide and global moviegoing.

But the surge of the virus across much of the U.S. has upended the industry's aims for even a late-August return. Last week, California ordered its cinemas closed.

Warner Bros. Pictures Group chairman Toby Emmerich said the studio will soon share a new “2020 release date” for “Tenet." It may be a much different rollout, with the film opening in staggered international release.

"We are not treating ‘Tenet’ like a traditional global day-and-date release, and our upcoming marketing and distribution plans will reflect that,” said Emmerich.

Emmerich said the pandemic's spread has forced the studio to reevaluate its plans. Warner Bros. also shifted the horror sequel "The Conjuring 3? from Sept. 11 to June 4, 2021.

“Our goals throughout this process have been to ensure the highest odds of success for our films while also being ready to support our partners with new content as soon as they could safely reopen,” said Emmerich. “We’re grateful for the support we’ve received from exhibitors and remain steadfast in our commitment to the theatrical experience around the world.”

Other films have planned their releases partially around the launch of “Tenet.” Walt Disney Co.’s “Mulan” remains scheduled for theatrical release on Aug. 21.

Movie remain in a precarious limbo. Without new releases, U.S. indoor and drive-ins that are open have played mostly older films and a smattering of smaller new releases.

Before the recent spike in the coronavirus crisis, chains have sought to assure moviegoers with protocols like limiting to 25-50% capacity and cleaning seats in between showings.

But months of closed and no new product has put enormous pressure on an already stressed business. AMC Theaters, the world's largest chain, recently reached a debt deal to help itself remain solvent.

AMC has been aiming to reopen most locations July 30. Cineworld, which owns Regal Cinemas, had set July 31 for its reopening.