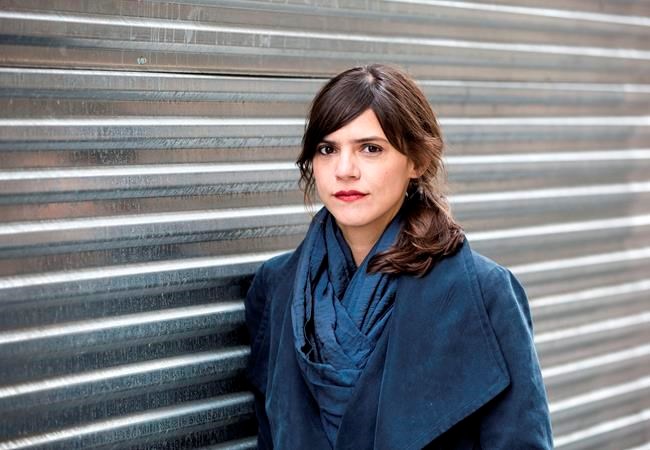 NEW YORK — Cooped up at her Bronx home with her daughter and a niece because of the coronavirus pandemic, Mexican writer Valeria Luiselli says she has lowered the “volume and speed” of her life. She is arranging books in alphabetical order, planting legumes on her balcony and listening to old recordings from Argentinian author Julio Cortázar.

Her rhythm has slowed but not the accolades and awards for her latest novel, “Lost Children Archive,” which last week was with the British Rathbone Folio Prize. The book, Luiselli’s third novel, is part fiction part documentary: A family’s American road trip mixed with the stories of migrant children along the Mexico-U.S. border.

Luiselli accepted the prize at a ceremony held online because of the global coronavirus outbreak. In a phone interview with The Associated Press, the 36-year-old writer said she's sad that she could not be in London to receive it in person but grateful to see people keeping the faith in books.

“The fact that the literary community is still in full swing, even from their homes, and behind their screens, is moving and encouraging,” she said, speaking in Spanish.

“I think it is my duty, and the duty of every writer, whether is a science-fiction writer, a journalist, a poet, each at their own pace and within their own capacities, to document this moment,” she said.

“Lost Children Archive” has also won the Andrew Carnegie Medal for Excellence in Fiction, an American Academy of Arts and Letters Award, and a Vilcek Prize for Creative Promise in Literature. It is a finalist for The National Book Critics Circle Award for Fiction.

Luiselli’s inspiration came from the immigration crisis of 2014, when thousands of children were trying to enter the U.S. in search of asylum, fleeing poverty and violence in Central America. The author said she started paying attention to how that story was being told, both in the media or at casual conversations in diners in Arizona.

“I started asking myself how (the migrant) children of this generation were going to eventually tell this story, what were they going to say about this reality — that on one hand was very real but on the other seemingly implausible — about thousands of children in a migratory limbo,” she said.

In New York, she started volunteering with nonprofits as an interpreter in immigration court, writing down the interviews she did with migrant children so attorneys could help them out. That experience led to an essay about immigration, “Tell Me How It Ends,” in 2017. “Lost Children Archive” came in February 2019.

Born in Mexico City, Luiselli grew up in South Korea and South Africa, among others, because of her father’s work in nongovernmental organizations and later as a diplomat. She speaks both English and Spanish and can write in either language. In addition to writing during her seclusion, she's reading out loud to her family and taking photos.

“We are going to need this narrative fabric, some sort of fabric for us to lay down once we overcome this.”