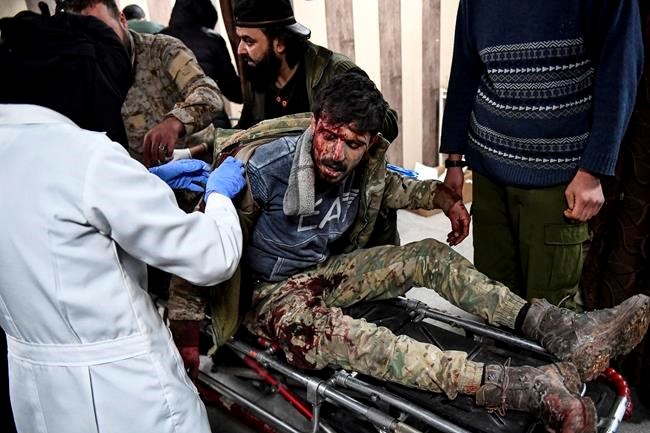 Turkey has sent thousands of troops into the area to support Syrian insurgents holed up there, but hasn't been able to stop a Russian-backed Syrian government offensive to retake Idlib province.

The Turkish Ministry's statement said the latest Syrian attack on its troops also wounded six soldiers. It did not provide further details.

The assault came as Turkish President Recep Tayyip Erdogan was scheduled to depart for Moscow, where he said he aims to broker a cease-fire in Syria with Russian President Vladimir Putin.

Turkey and Russia are the two main power brokers in Syria and each supports rival sides in the nine-year conflict.

“We expect to reach a shared view of the cause of the current crisis, its consequences and agree on a set of measures to overcome it,” Russian presidential spokesman Dmitry Peskov said of the upcoming meeting.

Russian officials have said they hold Turkey responsible for the collapse of a cease-fire agreement reached in Sochi, Russia in 2018. They say Ankara has failed to the deal and rein in militants who continued attacking Syrian and Russian targets. Turkey has rejected the Russian assertion, saying Ankara was making progress against radical groups in Idlib when the Syrian government launched its offensive.

In a statement, Konashenkov said that under the 2018 agreement with Russia, Turkey was obliged to ensure that militants in Idlib pull back 15-20 (9-12 miles) from the de-escalation zone along with their heavy weapons. Instead, he argued, al-Qaida-linked militants “and other terrorist groups pushed moderate rebels north toward the border with Turkey.”

Konashenkov also assailed the West for turning a blind eye to Turkish military action in Syria "in violation of international law" and treating Turkish threats to destroy Syrian army units as a “legitimate self-.”

The Russian military said in a statement Wednesday that “a group of terrorists” made a failed attempt to detonate ammunition placed next to chemical storage tanks in the western part of Saraqeb two days ago. It claimed that the failed attempt was a bid to blame the Syrian government for launching a chemical attack.

The Russian military said the militants were poisoned when one of the tanks leaked before they could detonate the explosives.

Clashes between Turkish and Syrian forces in northwestern Syria have killed 58 Turkish troops in the past month, including 33 soldiers killed Thursday in a single airstrike.

In an interview with Russian state TV channel Rossiya 24, Assad described the Turks as a "brotherly people" and asked them: "What's your problem with Syria? What is the problem that makes Turkish citizens die for (it)?" Assad was referring to Turkish troops killed recently in Syria.

Assad was making a point that there is no animosity on the part of Syria toward the people of Turkey but to the political leadership of President Recep Tayyip Erdogan. Syrian state media refer to Erdogan's government as the "Turkish regime."

"Syria and Turkey share common interests. There are many ethnic Syrians in Turkey and many ethnic Turks in Syria," Assad said. He claimed that Syria has not carried out any hostile acts against Turkey.