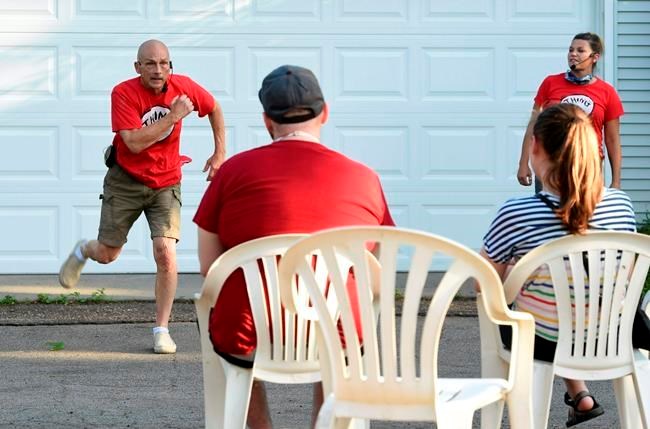 ST. PAUL, Minn. — What do you do when you’re a married couple quarantined in your house for months with your stage work shut down?

You write and perform a play about it and you take it on the road. Um, make that take it to the driveway. Or a backyard.

Husband and wife Jen Maren and Peter Simmons created “My Funny Quarantine” — a 30-minute performance featuring songs, storytelling, improv, pantomime and … swordfighting — that shares a story of a couple at home together due to the COVID-19 shutdown. Maren and Simmons are performing it on request outdoors for and family gatherings of 25 people or fewer, the St. Paul Pioneer Press reported.

If these were non-pandemic times, Maren would now be on stage for her sixth round as Marjorie Congdon Caldwell in History Theatre’s “Glensheen.” Simmons would be on stage at Park Square Theatre this month in “Holmes and Watson.” (Both productions have been rescheduled for summer 2021.) They would also be working as part of the “Science Live Theatre” acting company at the Science Museum of Minnesota.

Maren said they were on their way to their most successful year ever as a couple. When their performances shut down, she panicked.

“What can I do? What can Pete do?” she wondered as she lost sleep. She woke one morning and asked, “Pete, what can you do?”

Maybe they could perform together, Maren suggested. Simmons acts, plays guitar and has done street , including a stint at the Minnesota Renaissance Festival in the early 1980s. Maren acts and sings.

Simmons reacted the way he always does, he says: “No, that wouldn’t work.”

Maren says she reacted the way she always does. She kept quiet about it.

About four days later, she says, Simmons announced: “I wrote a play about a couple quarantined together.”

A chat with the couple on the front porch of their St. Paul home is solid proof the dialogue for “My Funny Quarantine” is based in real life.

Like most married couples in conversation, they often continue one another’s sentences, toss in a jab or inside joke.

Like most actors in conversation, they are witty and animated and, well, dramatic.

Maren and Simmons, who met during a show in 2011 and were married in 2014, call their two-person company Theatre Unmasqued (and make fun of the spelling during their show, saying it proves they are “ professionals”).

Before the COVID-19 lockup, the most time they’d spent together — just the two of them — had been on vacations, Simmons says. Confined together 24/7, they did projects around their 1890s house, including adding an upstairs laundry room that doubles as a sound studio for voiceover work … which has also become scarce during the coronavirus shutdown.

“Everything is gone,” Maren says she worried. “What do I do?’

Creating “My Funny Quarantine” gave him purpose, Simmons says. “It’s not underselling it to say for me, this was a lifesaver.” He calls his wife the engine for ideas: “En-Jen”.

“I have the idea, he makes it happen,” Maren says.

They knew the play had to appeal to families, since they’re staging it outdoors. Their experience working with the acting company at the Science Museum helps there, Maren says. Science Museum performances are for kids and adults “with a lot of distractions around them,” Simmons says.

But just as Theatre Unmasqued was ready to take its tale to the driveway, the killing of George Floyd changed everything. Riots following Floyd’s death hit two blocks from their home.

“We didn’t want to be tone deaf,” Simmons says. “We can’t sugarcoat it. This is a play by, and about, white people.”

After a respectful pause, Maren and Simmons decided to go ahead with the show, but acknowledge that problems cannot be ignored. Through July, they’re donating half of their proceeds to Black Lives Matter and the Equal Justice Initiative.

There are no set fees for the show for now. Audience donations are accepted.

“We still also think there validity in some release from everything (through entertainment),” Maren says, “so you can come back and pick up the fight again.”

Simmons also wrote Maren’s one-woman play, “Live from New York! He’s a Prom Date!”, which ran at History Theatre in May 2019. It was based on a true story about Maren coming home from high school in Red Wing in 1992 to find her mom had entered her to be on the “Sally Jessy Rafael” daytime talk show because Maren didn’t have a prom date. They were flown to New York to appear on the show. Maren and Simmons say Theatre Unmasqued may bring that story back.

From song parodies (“Wasting Away Again in My Corona-ville) to pantomime improv where Simmons acts out a story based on audience suggestions, “It’s a psychological drama about people learning how to stay in love,” he says.

So, how much of “My Funny Quarantine” is based on real life?

Let’s just hope that doesn’t include the swordfighting.