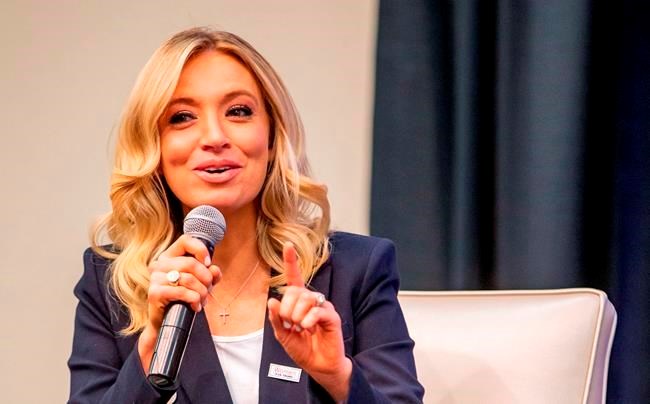 WASHINGTON — President Donald Trump shook up his communications team on Tuesday, replacing his press secretary and adding new staffers as he grapples with the coronavirus pandemic.

Stephanie Grisham, who had held the titles of press secretary and White House communications director since last June, is out after never holding a formal press briefing. She will be rejoining the first lady’s office in a new role as Melania Trumps's chief of staff.

Kayleigh McEnany, a top Trump campaign spokeswoman, will take over as Trump’s fourth press secretary. Also heading to the White House: Pentagon spokeswoman Alyssa Farah. She will lead strategic communications, according to a senior administration official familiar with the moves who spoke on condition of anonymity because the decisions had not been formally announced.

The shakeup comes as the president is facing the biggest crisis of his administration, with the coronavirus spreading across the country. The virus has killed more than 12,000 people in the U.S. and fundamentally transformed American life while plunging the economy into what is expected to be a major recession.

Grisham, who succeeded Sarah Sanders and Sean Spicer, was arguably the nation’s least visible press secretary in modern history, having never held a press briefing during her nine months on the job. While she made occasional appearances on the Fox News Channel, she preferred to tape her interviews in a studio to avoid having to speak to reporters who gather on the White House driveway to interview officials after they appear on TV via cameras set up outside the executive mansion.

Her departure was not a surprise. Grisham had been largely sidelined since the start of the pandemic, with the press team for Mike Pence, the head of the coronavirus task force, taking the lead. In addition, Mark Meadows, the president's new chief of staff, has been working to bring on his own team, including senior adviser Ben Williamson.

The role of press secretary has been a particularly challenging one under the media-obsessed Trump, who believes himself to be his best spokesman, communications director and strategist, and demands absolute loyalty.

Over the last several weeks, Trump has revived the tradition of the daily press briefing, personally taking the stage in the White House briefing room to try to put a positive spin on the federal government’s response to the pandemic.

Trump has a highly volatile relationship with the press, slamming unflattering stories as “fake news” while closely following his coverage. Briefings earlier in the administration often turned combative, especially under Spicer. He began his tenure with a much-panned briefing in which he claimed the president's inauguration crowds had been the largest ever, which was untrue.

McEnany was already a regular defender of the president on television. Farah has deep ties to the White House, having served as press secretary to Pence and as Meadows' communications director.

Grisham's new role was announced Tuesday by Mrs. Trump. The first lady said Lindsay Reynolds, her chief of staff for the past three years, had resigned to spend more time with her family.

Grisham, who had said in a statement that she would remain in the West Wing “to help with a smooth transition for as long as needed,” tweeted her thanks to Trump on Tuesday evening “for the of a lifetime.”

Anita McBride, who served as chief of staff to first lady Laura Bush, said Grisham’s return to the East Wing shows her close ties to Mrs. Trump. McBride recalled that it was the first lady, and not the president, who announced last year that Grisham would become the White House press secretary.

“It will be an easy transition for Stephanie,” McBride said. She added that Grisham “knows how Mrs. Trump likes things done. They’re clearly very close.”

But Lis Power of the liberal watchdog group Media Matters for America said Trump was “replacing a White House press secretary who did little more than appear on Fox News and other right-wing media outlets, with a person who is best known for her sycophantic pro-Trump media appearances."

“We should expect Kayleigh McEnany to follow the lead of her predecessors," Power said.