“Obviously, many, many of our regional friends understand the severity of this virus and chose to stay away. We want to thank those in the region who are the doing the right thing – and that’s easily the vast majority of day-trippers.”
Apr 16, 2020 12:45 PM By: Cathy Ellis 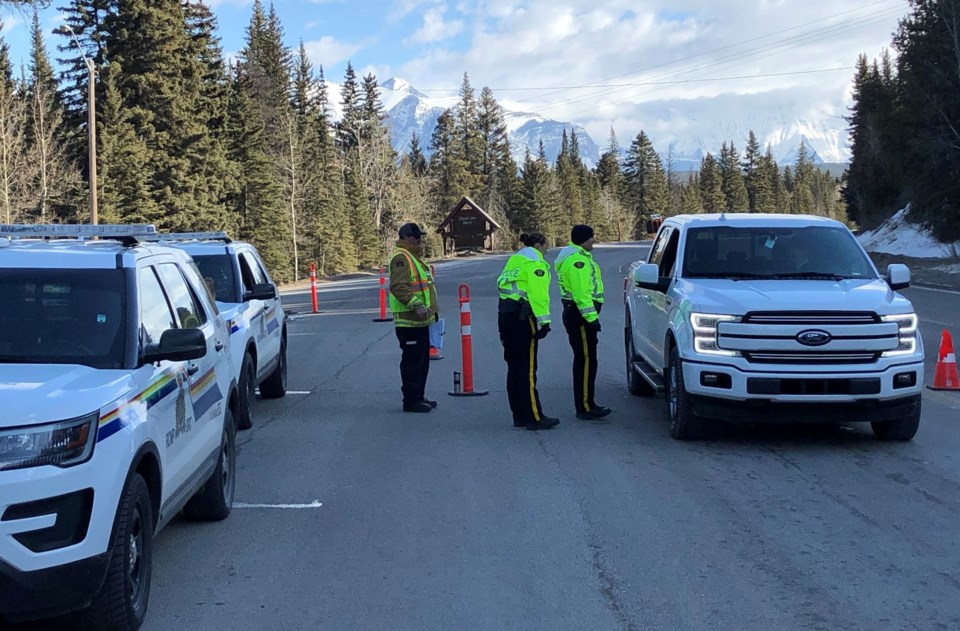 Banff emergency services stopping vehicles at checkstops to discourage visitors from going into the townsite on April 10. TOWN OF BANFF PHOTO

BANFF – The Town of Banff will consider banning visitors from entering the famed tourist town if day-trippers continue to show up during the COVID-19 crisis.

About 3,000 vehicles entered the Banff townsite during educational checkpoints set up at both entrances to town over a four-day period on the Easter holiday long weekend, including many day-trippers.

Town of Banff officials say 70 per cent were Bow Valley residents and 15 per cent were essential services such as trucking, transportation, trades and delivery. The other 15 per cent were travellers passing through or day-trippers still wanting to visit the tourist town during this unprecedented health crisis. Of the 181 vehicles with day-trippers, half continued into the community.

The checkpoints were set up to inform people about the importance of not travelling to help stop the spread of COVID-19, but officials say more than half the day-trippers chose to head into the community despite recommendations against that.

“Under the state of local emergency we do have the authority under the minister to force people to turn around if they do not have an essential need to be in our community,” said Silvio Adamo, the Town of Banff’s director of emergency management.

“If we see that our regional day-trippers start to increase and refuse to take our recommendations, then we will go to that next step and require them to turn around… we just haven’t gone to that step yet.”

Councillors Chip Olver and Corrie DiManno wanted to know what some of the triggers may be to move towards an enforcement approach at the checkpoints, which are staffed by RCMP, community peace officers and firefighters.

“Would you have the authority to say you must turn around, because those are some of the questions I’ve received this week,” said Coun. Olver during a council meeting on Tuesday (April 14).

Adamo said the intent is to run more check stops, particularly as the weather gets warmer and people start getting cagey in self-isolation.

“We anticipate that as spring arrives and warmer weather sets in that folks in our region will want to come out to their favourite backyard of the Rocky Mountains – and that is a concern of ours,” he said.

“The health authority is making it very clear that people should stay home and not travel unless absolutely necessary, and so we want to continue that messaging and to make sure we are doing our part as a community to stop that spread.”

The 3,000 vehicles that entered the Banff townsite over the four-day Easter holiday period from Saturday to Monday (April 10-13) compares to almost 40,000 vehicles in the tourist town for the same holiday weekend last year.

Adamo said the Town is thankful that the vast majority of visitors stayed away, noting Banff saw eight per cent of its typical vehicle traffic for the Easter weekend, but he was hoping for better compliance from people to turn back when recommended to do so.

“I’m not going to say I was completely disappointed, but I was hoping for better compliance for folks turning around. Again, we weren’t making anyone turn around; we were recommending they do so,” he said.

“Obviously, many, many of our regional friends understand the severity of this virus and chose to stay away. We want to thank those in the region who are the doing the right thing – and that’s easily the vast majority of day-trippers.”

Visitor numbers to the Town of Banff have steadily decreased over the past few weeks, as more people understand the seriousness of the COVID crisis.

Mayor Karen Sorensen said Banff is keen to welcome visitors back to the tourist town “when we are through this pandemic.”

“The Town of Banff has very few stores open, and those that are operating are providing essential services to residents,” she said.

Banff’s emergency coordination centre is trying to do everything it can to stop the spread of this new coronavirus, including closing playgrounds, the recreation grounds and the off-leash dog park among other initiatives.

“We know our economy has been completely paralyzed and we want this to be over as soon as possible,” said Adamo.

“That can happen sooner rather than later if everyone does their part in trying to make that happen.”