"It can be made to be economic but the economics are not those of oil and gas, they are long term. They are for the patient investor who really wants to do something for the planet.”
Nov 26, 2020 1:15 PM By: Clare Gauvreau 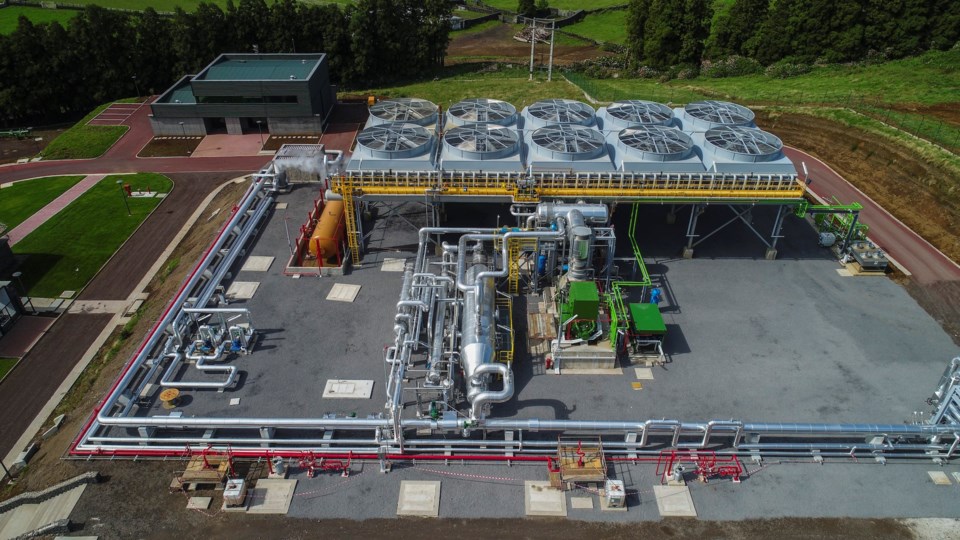 Pictured is a 4 MW geothermal power plant at Pico Alto on Terceira island in Portugal. Alberta No.1 plans to build a geothermal power and thermal energy facility in the MD of Greenview, south of Grande Prairie. (Submitted photo)

While not often on the same page, it appears the UCP government and the NDP are at least reading from the same book when it comes to the potential for diversifying Alberta’s energy sector through geothermal energy development.

Describing it as a “no-brainer,” NDP leader Rachel Notley said earlier this month the province has the skills and workforce to take geothermal energy to the next level.

“We have a reputation as energy leaders, and we can capitalize on that to lead in all forms of energy, including renewables like geothermal,” Notley said during a press conference in Calgary Nov. 6.

Bill 36, the Geothermal Resource Development Act, is currently before the Alberta Legislature with an aim to laying the groundwork for geothermal development in the province. The Act, if passed, outlines rules and processes for industry, legislative authority for land use and liability management, and the protection of landowners and mineral rights owners.

“Encouraging the development of low-emitting geothermal energy will play an important role in Alberta’s economic recovery by attracting investment and creating jobs in this emerging sector,” Energy minister Sonya Savage said in announcing Bill 36. “Through this legislation, we are establishing a clear path forward for geothermal projects, while ensuring the resource is developed responsibly and in the best interests of Albertans, including landowners.”

However, the road to riches may not be quite as clear as some might hope.

Dr. Catherine Hickson, vice-president of Geothermal Canada, has close to 40 years of experience in the geothermal energy field, and while Alberta’s recognition of geothermal energy generation potential is welcomed news, she said a major challenge facing geothermal energy development in the province is attracting private investment into an industry where the returns and the industry’s full potential won’t be realized for many years.

Hickson spent 25 years as a research scientist with the Geological Survey of Canada, before joining a private sector company developing geothermal projects around the globe. Today, she’s the CEO of Alberta No. 1 Geothermal Energy Project – a partnership between Terrapin Geothermics and PCL with the support of the MD of Greenview.

With $25 million in matching funding through the Federal Government’s Emerging Renewal Power Program, Alberta No.1 plans to build a geothermal power and thermal energy facility in the MD of Greenview, south of Grande Prairie. It is gearing up to drill its first exploration well in early 2021 with the goal being to produce clean, baseload electricity and thermal energy for developing industries in that area.

Harnessing the earth’s heat is by no means a new concept but since early 2019 there has been a global shift in interest to geothermal power and thermal energy development, both on the international front and from the Canadian government as more attention is being paid to greenhouse gases, sustainability and the environment, she said.

“Canadians have had a long association with geothermal but the problem is that we’ve never been able to get a geothermal project going, particularly in Alberta, because in the past it hasn’t been economic when compared to power generation from other sources. Your competition in British Columbia is low-cost hydro and in Alberta it’s low-cost gas and coal, obviously. The cost of producing power in Alberta is a few cents a kilowatt-hour and that’s not an economic level for a geothermal project.”

If the price of natural gas is low, then companies that want to produce power look to natural gas rather than other alternatives. Much of the progress made in terms of solar and wind power generation was done with significant credits, tax breaks and incentives early on in the industry to help those companies get over those hurdles, according to Hickson. Those same kind of incentives have never been afforded the geothermal industry to date.

“Alberta has always been of interest because, as anybody in the oil and gas industry knows, many of the wells produce pretty hot water. So how can we capture that hot water?”

It’s important to understand there are different ways to harness geothermal energy. Hickson said the Alberta No. 1 project is deep geothermal, which involves drilling upwards of four km below the earth’s surface, tapping into the earth’s intrinsic heat. Meanwhile, shallow geo-exchange essentially involves using earth as a battery, whereby a heat pump extracts the heat circulating in your home, for example, during the summertime and transfers it to an underground storage system and then it is extracted in the wintertime to augment your home heating.

There are many geo-exchange systems in Canada. However, these systems are limited by what they can achieve due to storage capacity and heat is limited to 20 degrees Celsius on average.

Okotoks has a district heating network using geo-exchange but the system also uses solar to further heat the exchange fluid and put higher temperatures into the ground for storage.  New technological advance are being developed to make these systems work more effectively in the long term.

“What we are talking about is about being able to tap temperatures that are much higher up to 100 degrees,” Hickson said of the deep geothermal Alberta No. 1 project. “It is that extra heat content that allows you to do things that you can’t do with a geo-exchange system just because you’ve got a lot more heat to play with.”

The bottom line is we can be doing a lot more, Hickson said.

Of all the renewables, including solar and wind energy, geothermal is the most benign, according to Hickson, and leaves a very small footprint. However, the quick turnaround profit once found in the oil and gas sector is not something Albertans should expect in the development of geothermal energy.

“It’s is very hard to get people to, in fact, put a price on it so they are willing to invest and that is our big conundrum right now – finding investors who are in this for the longer term, that really want to promote something, move something forward that does have very positive environmental aspects to it.”

She cautions that there is some misinformation being floated around the potential of thousands of megawatts of power generation from geothermal development. Instead, she said, the opportunities today more realistically lie in thermal energy.

“It might be true in 20, 30 or 40 years from now, when we have a lot better ability to generate power from low temperatures like say 70 degrees Celsius. Right now, we really need fluids above 110 degrees in order to efficiently make power . . .. But there is thousands of megawatts of heat energy that could be tapped, but that heat energy has a much lower value than oil or gas or even power. So, that’s where there has to be some government backing, some government input into showing that we can do it. It can be made to be economic but the economics are not those of oil and gas, they are long term. They are for the patient investor who really wants to do something for the planet.”

About the Author: Clare Gauvreau

Clare Gauvreau has worked for the St. Paul Journal for more than 20 years as a journalist, editor and publisher. In her role today as newspaper publisher she continues to contribute news and feature articles on a regular basis.
Read more