The companies also plan to pilot emerging carbon reduction technologies around oilsands operations, such as direct air capture, which uses a mechanical system to extract carbon dioxide out of the air.
Jun 10, 2021 10:15 AM By: Canadian Press 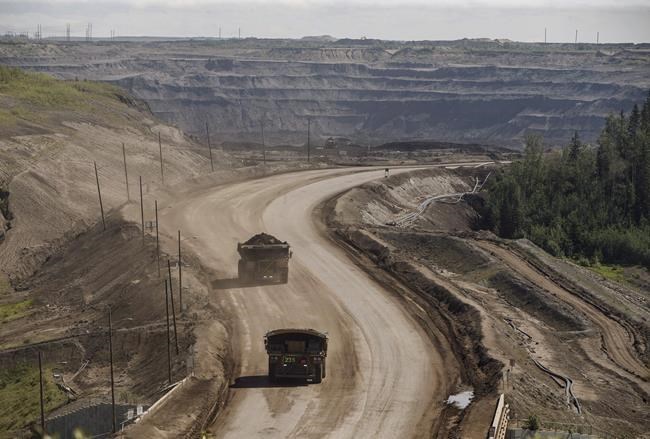 Heavy hauler trucks transport material from Suncor's North Steepbank Mine in the oilsands in Fort McMurray Alta, on June 13, 2017. A group of the largest producers in Canada's oilsands have announced a joint strategy Wednesday to reach net zero greenhouse-gas emissions by 2050. THE CANADIAN PRESS/Jason Franson

CALGARY — Experts say a joint strategy by Canada's largest oilsands producers to reach net zero greenhouse-gas emissions by 2050 will help speed up innovation and drive further investment into the industry.

A large part of their strategy includes building a carbon sequestration facility in Cold Lake, Alta. The group says the facility would be available for other industries to use as well, and could possibly connect to Edmonton for use by businesses there in the future.

Steven Bryant, a University of Calgary professor in the Department of Chemical and Petroleum Engineering, said carbon sequestration is a proven technology that simply needs to be built up quickly — which a coalition is well-positioned to do.

"This does not require some exotic technology, what it requires is getting together and building stuff fast," said Bryant.

The companies also plan to pilot emerging carbon reduction technologies around oilsands operations, such as direct air capture, which uses a mechanical system to extract carbon dioxide out of the air.

The companies say the project will need significant investments and was made possible because of support programs from the federal and Alberta governments.

"We are doing more than just talking about the need to play a role — we are taking bold action to address our emissions challenge and earn our spot as the supplier of choice to meet the world's growing demand for energy."

The group compared their plan to the Longship project in Norway, a multibillion-dollar project that includes a cross-border carbon dioxide storage and transportation facility that will be available to multiple industries and is slated to open by 2024.

CIBC chief executive Victor Dodig said the bank is committed to playing its part in financing the kinds of projects that promote sustainability in Canada's oilpatch.

He said the announcement helps position Canada as a leader in responsible energy production and puts businesses in a good position to attract investment.

"This better positions our country to attract financial capital to fuel growth, meet the growing demand for sustainable energy sources around the world and here at home, as well as play a lead role in advancing carbon capture, utilization, and storage technology," said Dodig in a statement.

"There's increasing focus on ESG and indeed there is increasing interest and zeal in the investment community to invest in lower carbon energy sources," said Bryant.

"Every credible energy forecast indicates that oil will be a major contributor to the energy mix in the decades ahead and even beyond 2050. Alberta is uniquely positioned and ready to meet that demand," Savage said in a statement.

"This initiative will also pave the way for continued technological advancements, ultimately leading to the production of net zero barrels of oil."

This report by The Canadian Press was first published June 9, 2021.