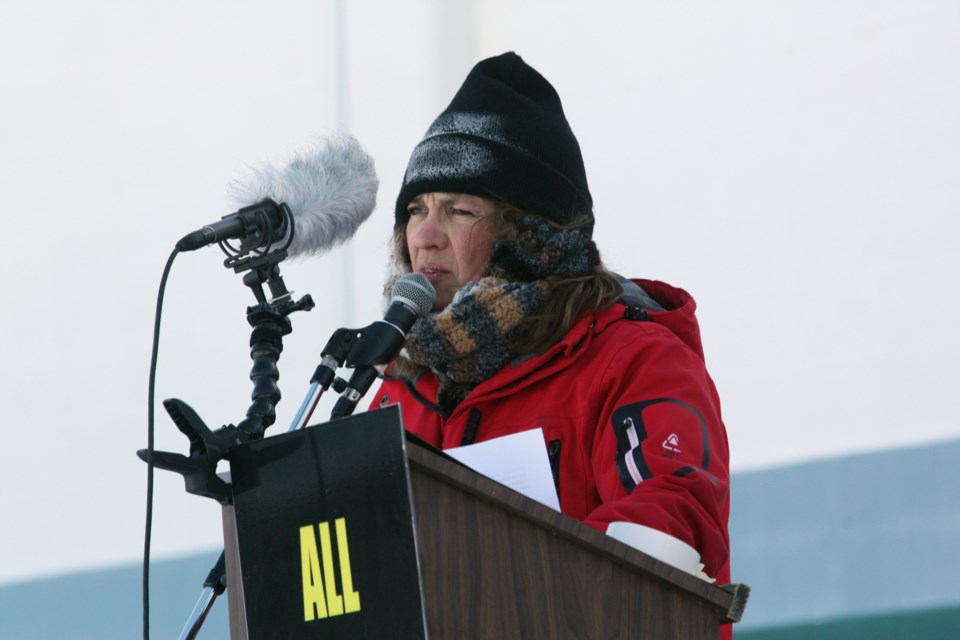 BARREHAD/WESTLOCK - The organizer of the two Enough is Enough anti-COVID-19 measures rallies in Westlock and Barrhead now faces more than $2,000 in fines for contravening the provincial Public Health Act, but says she’s planning on hosting three additional protests next week.

In response to the 60-minute protest held in the Westlock Curling Club parking lot Feb. 11 and a similar event held Feb. 18 in Barrhead at the Agrena parking lot, RCMP have issued Benita Pedersen two $1,200 tickets for breaching 73 (1) of the act (contravening an order of the Medical Officer of Health), specifically in relation to mass gatherings. As part-three tickets a court appearance isn’t required although Pedersen can appear in court, set a trial date and contest it — the Westlock ticket is due May 5.

Town and County This Week reached out to Pedersen for comment Feb. 18 and she responded by asking how we had learned she had been ticketed. Following the Barrhead event she stated on social media she’s planning on holding a second rally in Westlock Feb. 25 followed by one in Athabasca Feb. 26 and another in Barrhead Feb. 27. On Athabasca-Barrhead-Westlock MLA Glenn van Dijken’s Facebook page she stated she’s “disappointed” with the provincial government and invited him to attend the upcoming rallies.

“If you have any integrity whatsoever as an elected representative, you will attend these events and listen to the voices of Albertans,” Pedersen wrote.

A DJ by trade, Pedersen said previously she was inspired to organize local protests after attending rallies in Edmonton and connecting with groups such as Freedom4Canada and We Are All Essential. At the Westlock rally Pedersen told the crowd, “You can defy the rules, you can come to protests, you can organize a protest, you can take legal action. There’s many ways to do it. Get involved and do something.”

“She was served after the rally … not that day,” Westlock RCMP Staff Sgt. Al Baird confirmed Feb. 18. “It’s one of those things. People want to have their say and have their protests and do all that, but there are consequences to the actions. So if you realize that you’re breaking the law, you’re liable to face a ticket, whether it’s speeding on the highway … laws are there to be enforced and we have to do that without any bias.

“In this particular case they choose to have a rally that contravened the health orders of the medical officer, so we had to do our job too. I’m sure the public health office had calls and the town and we’ve had calls.”

Barrhead RCMP Sgt. Bob Dodds said that everyone has the right to protest peacefully and lawfully and if they can do it while masked and respect social distancing he didn't see a problem. And although the Barrhead rally took place without incident, most participants did not mask and social distancing was not respected, he noted.

"It is a tough situation. We live in difficult times and I understand people's frustrations, but at the end of the day there are more than 20,000 Canadians dead because of COVID and we have to reign it in," Dodds stated in a release to the Barrhead Leader.

"From my perspective, it went as well as I could have hoped. There were no confrontations and people left us out of it."