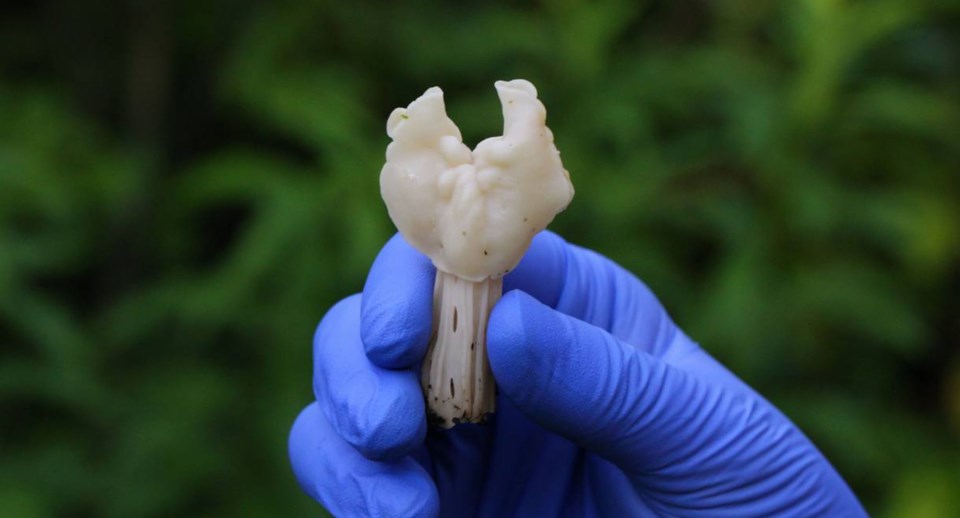 Hidden in the leaves and grass of the forest floor, this lovely mushroom almost went undiscovered.

Can you tell Agaricus arvensis apart from Agaricus xanthodermus? What about the difference between Pleurotus ostreatus and Pleurocybella porrigens?

The paramount rule of mushroom-gathering is simple: know what you're eating before you decide to serve it up. Coming in a close second is a word of advice for foragers of any stripe: come prepared – especially if it is mosquito season.

I ventured out this past week in St. Albert with a group of mushroom hunters from the Alberta Mycological Society for an after-work foray. I broke that second rule, to my chagrin (as I write this, I'm still scratching the dozens of bites I got). Eschewing bug spray, I grabbed my camera, threw on a sweater and figured that would be good enough.

It was not, however, good enough, and I sadly didn't have the fortitude to outlast the mushroom hunters who came properly prepared. Setting out from the Kingswood day area, we made a beeline for the trees with a keen eye toward the often cream-coloured but sometimes vivid fungi that dotted the forest floor. Once you start trying to spot mushrooms, you see them everywhere: little red growths on the end of a fallen tree, lichen-like clusters at the base of a stump, fungi on the forest floor that resemble flowers.

Before that trip, I'd never heard mushrooms referred to as "beautiful," but after digging up a lovely little 'shroom (species unknown), I could see why this hobby gets some people so engaged.

You see, the fungus frontier is a very real thing here in Alberta. Often, you can't just Google a species of mushroom and confidently say you've identified it. While there are hundreds of types of fungi that have been identified, a surprisingly large knowledge gap persists on all those other unidentified species and subspecies out there in the province. That's where groups like the Alberta Mycological Society come in: aside from forays, members share their finds to help figure out new types of mushrooms.

It's interactive, informative and a little addicting. Fungi are strange flora: some stain orange when you cut into the flesh; some take years and years to mature; and some that would normally taste great soak up exhaust and toxins, so if they're around asphalt or parking lots, you'll want to avoid them.

St. Albert's fungi are wide and varied in type, and if you've ever had the compulsion to pick them, you could take it one step further and try to identify them as well. With a little research, preparation and the help of other mushroom enthusiasts, this type of urban foraging can be hugely rewarding – not to mention delicious.