A decaf Americano and a short story to go please 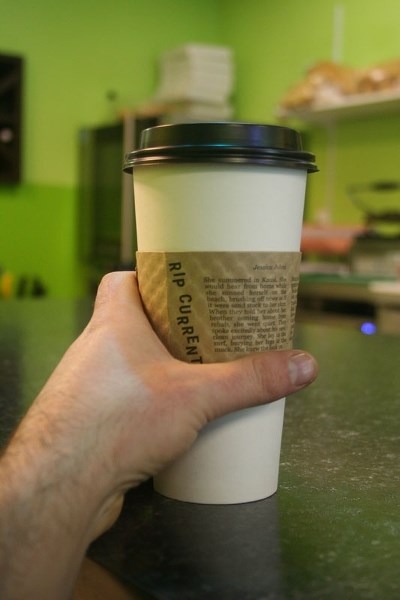 A series of five really short stories published on coffee sleeves has started making the rounds at two cafĂ©s in Morinville. The project is the brainchild of Edmontonian Jason Lee Norman who enlisted the help of Jessica Kluthe and Jennifer Lavallee

Some people take their cuppa joe with cream, others with sugar and maybe a muffin too. Why not a quick short story to go with it?

YEGwords coffee sleeves is the brainchild of Edmonton writer Jason Lee Norman who first brought the project to the capital city two years ago. Now, it’s hitting Morinville cafĂ©s, thanks to a few influential townies who made it big with their own books and literary-minded projects.

He said that he first heard about it from a restaurant chain in the United States that asked big, big name authors to write short, short stories for its take-out packaging.

“It sounded tacky at first, but there was something about it that was unique and compelling,” he noted. “I did like the idea of getting writing onto stuff. I never knew how to do that myself because I wouldn’t know where to begin … but when I saw the sleeves and a lot of them are blank anyway, it’s a good canvas. I started to figure it out.”

The concept had some chutzpah to it so he enlisted the assistance of Morinville authors Jessica Kluthe and Jennifer Lavallee, partners in the literary business Third Verb, which offers writing workshops. One of their recent workshops allowed the participants to make submissions of up to 150 words.

Writing is hard work at the best of times and creating an effective story in that small amount of space is no easy feat.

“It’s definitely not as easy as it might seem,” Norman continued. “You have to choose your words carefully and you have to be a good editor. That’s the best thing. When they work, it hits you like a punch in the gut and it’s only 100 words. You just imagine what they can do with more. The fact that they can do so much with just a tiny, little canvas is pretty powerful.”

Those who have the right stuff for this round of YEGwords include Graham Bell, Jessica Johns, Nicole Moeller, Erin McCarty and Morinville’s own Cynthia Scott Wandler. Wandler is a reporter with the Morinville Free Press but when she isn’t writing the news, she writes her own fiction too. She thinks coffee sleeves are a fantastic way to get the word out and to help out local writers.

“Any idea to support the literary arts and to promote language and story is wonderful,” she enthused.

“I always say that a lot of these people that you’re reading, they might be your neighbour. They might be somebody you work with. The great writers … we’re all around. We’re not just hiding in our basements all the time, locked in our studies, trying to create stuff. We’re out there. You could be sitting next to someone on the train who wrote one of these things and they’re trying to get their work out there and connect with people. The sleeves are definitely the way to get it out there to a lot of pairs of eyes.”

Being published on a sleeve is a rare accomplishment to find on a CV too.

Java lovers in the town can find the YEGwords stories on their takeout cups at the Green Bean Coffee House, Higher Grounds and at the coffee station at the Morinville Public Library too.

Norman suggested that it’s a match made in heaven.