Abused by 'the system' 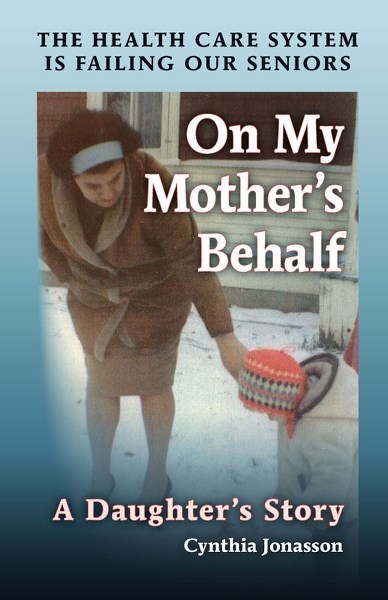 Cynthia Jonasson wrote this incredible and terribly upsetting book about her mother&#8217;s mistreatment in a local long-term seniors&#8217; care facility. The book receives a launch and discussion event this weekend.

It’s a tragic story that simply had to be told. Cynthia Jonasson’s mother, Grace Denyer, passed away four years ago. She was a resident of a local long-term seniors care facility and was mistreated time and time again by staff and managers alike.

Mistreatment is an understatement.

The story made the headlines, but media coverage doesn’t fix what happened. It can only work to prevent the problem from happening again.

That’s why Jonasson (along with her sister Beth Podgurny acting as editor) decided that the story was too important to fade into the background. After all, it’s not the only story that has come out of people’s experiences within ‘the System.’ On My Mother’s Behalf is their new book, recently published and set to receive a book launch and discussion event this Saturday.

For all intents and purposes, it’s one of the most difficult stories that I have ever had to read. It’s also one of the best written: astute, precise, and brutally honest. The only thing that allays the anger that arises from hearing what happened to this woman and her family is the pleasure of reading a piece of non-fiction so professionally produced despite being from a novice author.

Some stories are that important. Jonasson said that it all started as a simple journalling as a way of recording the traumatic events instead of having them always in her head.

“The process of writing started as a cathartic exercise for me,” she began. “Beth took my writings, edited and organized them, and insisted that the story be shared. The decision to publish was tough. At times, I wanted to put my writing on the shelf. However, Beth encouraged me to share the story. In my heart, I knew she was right.”

Sharing the story is one thing but On My Mother’s Behalf is very careful to not name either the facility or the people in the health-care system who were involved. One could simply search through websites of organizations such as the Elder Advocates of Alberta Society to get an education on this and many other cases.

This book very carefully details not only Grace’s physical and psychological mistreatment but also the legal and political fallout that included legislative debate and Jonasson nearly being thrown in jail for her continued calling out of such systemic abuses.

While Grace’s story is now all a matter of record in the newspaper articles and the government reports, it was far more compelling for Jonasson to be non-specific because of how far-reaching the mistreatment goes. Grace, the author says, wasn’t alone.

“Ours is not a unique story. Many seniors and families have had and continue to have similar experiences in many different facilities. To focus on one facility would diminish the pervasiveness of these issues.”

The issues revolve around the lack of basic care and extend into outright abuse. Several times while reading the book, I found myself unable to tolerate even the thought of a person having to suffer as Grace did. I have no personal connection with anyone currently in such a facility but I was outraged. Such is the power of this story.

At the very beginning, Jonasson suggests that people wouldn't believe that it was an accurate retelling of actual events. She later clarified that she wrote this because she couldn’t believe it herself.

“I was experiencing my mother being neglected and abused right before my very eyes and couldn’t do anything about it or stop it. I hope to give a voice to those who are unable to speak for themselves. To bring about awareness. Most people are unaware of what many seniors and their families experience in ‘the System’ until they encounter it themselves.”

“I hope that if I require the same level of care, by that time, ‘the System’ will have improved and no one will be experiencing what many are experiencing today.”

The book has already had two book launch events including one at the Chapters store here in St. Albert. Jonasson and Podgurny indicated that people continue to approach them to tell them their own stories from past and ongoing experiences “often in tears.” They have received thanks even from people working inside these facilities, some of whom she suggested were too afraid to speak out on their own. She encourages readers to be aware of agencies such as Public Interest Alberta and Persons for Protection in Care to get help.

The event takes place on Saturday, June 25 from noon to 4 p.m. Audreys Bookstore is located at Jasper Ave. in Edmonton. Visit www.onmymothersbehalf.ca for more information.

On My Mother's Behalf<br />by Cynthia Jonasson<br />157 pages<br />$14.25<br />Can be purchased in store at Chapters or online through Amazon.ca or PageMaster.