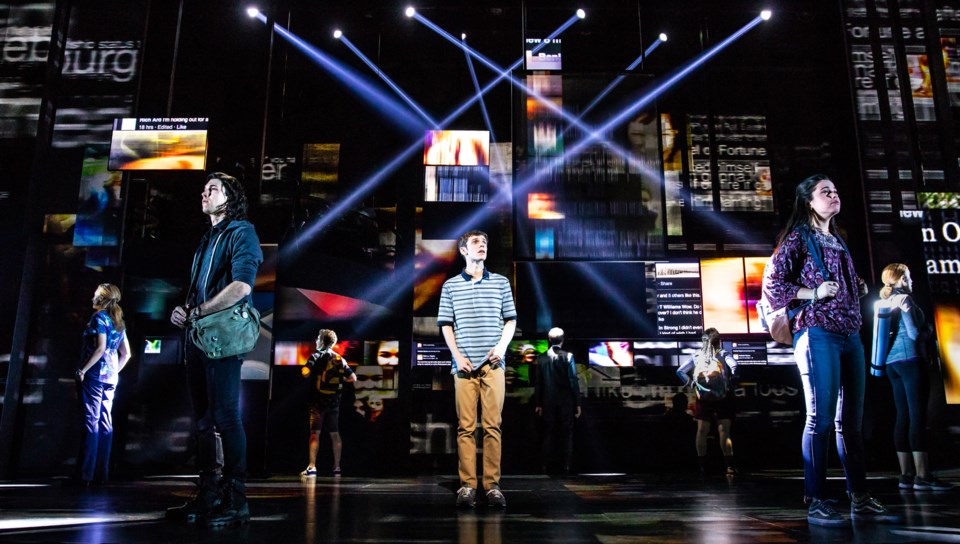 Ben Levi Ross (centre) stars as Evan Hansen in the Broadway production of Dear Evan Hansen. The musical makes its debut at the Northern Alberta Jubilee Auditorium from Feb. 11 to 16, 2020. MATTHEW MURPHY/Photo

Broadway Across Canada just revved up their tour machine with production of Dear Evan Hansen running Feb. 11 to 16, 2020, at the Northern Alberta Jubilee Auditorium.

Benj Pasek and Justin Paul, triple threats as Grammy, Tony and Academy Award winners, composed the music and lyrics for this musical that broke all box office records.

Dear Evan Hansen tells the story of a young man with social anxiety disorder who yearns to make a connection with his peers. After a classmate commits suicide, Evan – who is used to feeling invisible – is thrust into a spotlight.

In a misguided attempt to comfort the grieving family, Evan pretends he was a friend to their son. He even fabricates an email account to prove they were friends. After a fake suicide note appears online, Evan becomes the face of a viral video on loneliness.

The lie gets bigger and bigger, and at a certain point Evan has to decide whether to continue living the fantasy or come clean.