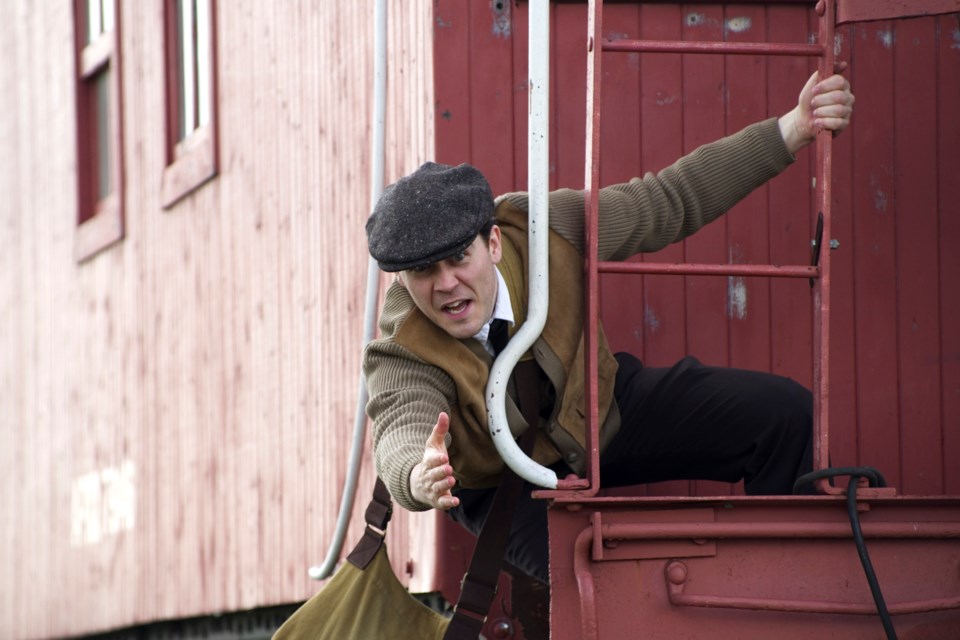 The Flying Detective is at the ATB Westbury Theatre as part of the Edmonton International Fringe Theatre Festival.

Fringers love to laugh and The Flying Detective is one production that had the packed audience yukking it up consistently.

In this 90-minute comedy directed by Taylor Chadwick, everyone travels back to 1919 where it appears Constable William Nixon is shot during a botched robbery attempt at Fort Edmonton.

Nixon’s former partner, Detective Campbell, a crusty boilerplate cop with a soft Scottish burr, vows to capture the perpetrator, a violent offender named Larson, even if it means chasing him across the province. That is no easy feat on steam locomotives.

Enter the barn-storming flyer Wop May. He’s just ordered an airplane kit and plans to start up an airline service in Alberta. Wop May offers to fly Campbell wherever he needs.

“What cop would be crazy enough to spend three hours in an aerial coffin,” shouts Campbell just a few minutes before stepping into the wobbly craft.

One of the best parts is watching the cast of four assemble an actual life-size airplane prop on stage, complete with wings and propeller.

What sets Accidental Humour Co. apart from other productions is their flawless approach to integrating live theatre with pre-recorded film sequences.

The real-time actors on stage interact with pre-recorded film scenes and the timing is flawless.

Starring in The Flying Detective is the Arden Theatre’s former professional programming presenter, Neil LeGrandeur, as the ill-fated Nixon and several other secondary characters.

In addition, Cody Porter stars as the irascible Detective Campbell, William Banfield is the upbeat Wop May and Cliff Kelly is the out-of-control Larson.

The Flying Detective has a delightful cartoonish vibe that will have you rolling with laughter. Buy your tickets now. I predict it will sell out quickly.

The Society for the Destitute Presents Titus Bouffonius is not for the faint of heart
Jan 26, 2020 12:00 PM