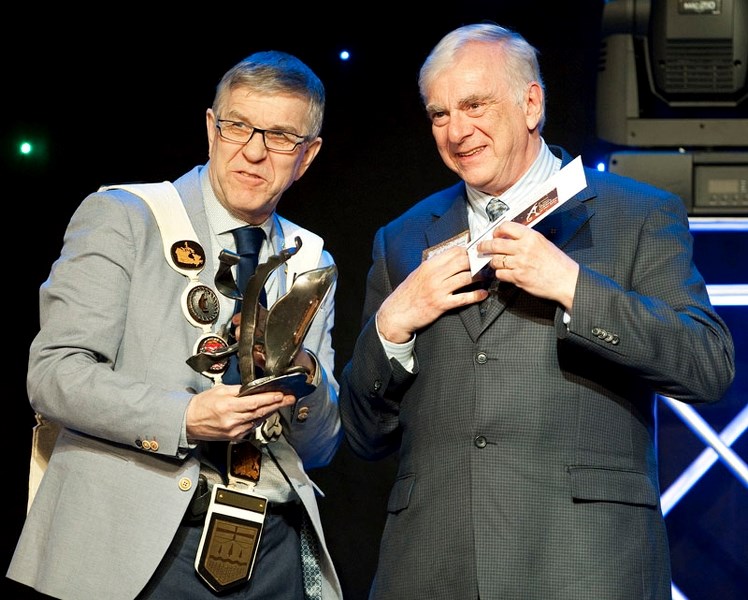 From Kieran Martin Murphy’s opening monologue as baguette-munching opera star Luciano Paparazzi to Michael Massey’s gracious acceptance speech, the eighth annual St. Albert Mayor’s Celebration of the Arts clipped along at a fun pace without wallowing in over-the-top back patting.

With just the right dose of irreverence, Murphy’s spoof of Luciano Pavarotti set the evening’s tenor. It framed the entire awards night as a celebration of artistic achievement minus the self-aggrandizing we see on televised events.

Paparazzi strolled on stage wearing a black tailcoat and hitting the high notes in Le Donne Mobile while eating chunks of baguette, a feat that puts hot-dog scarfing champions to shame.

By simply putting on or removing a pair of glasses, Murphy flipped back and forth from his alter ego to his real self, praising artists and the arts.

At one point he gently roasted Mayor Nolan Crouse saying, “Mayor Crouse are you here? Thank heavens, because it’s the Mayor’s Awards. It’s very nice of you to show up.”

In an unexpected poignant moment, Murphy paid tribute to the late Don Vaugeois, a pianist and community businessman whose personal generosity provided the bedrock for numerous music-related public events.

The evening’s highlight occurred when Massey strode on stage to the music of thunderous applause to accept his Lifetime Achievement Award for 45 plus years as a pianist, conductor, programmer, teacher and orchestrator.

Reading from a scripted speech, the Edmonton Youth Orchestra conductor lauded his students and passionately encouraged us to support music on an equal footing with other fields of study.

Using a quote from Plato, Massey gave the audience a glimmer into his musical makeup.

“Music is a moral law. It gives a soul to the universe, wings to the mind, flight to the imagination, charm to sadness, and life to everything. It is the essence of order, and leads to all that is good, just and beautiful,” Plato wrote.

For the occasion, filmmaker Marvin Polis created a short film that touches on Massey’s accomplishments and is available on YouTube.

Grinning, she walked to the stage shaking hands with Crouse and accepting the winner’s $1,000 cheque and a Samantha Williams-Chapelsky painting.

Once seated in the audience, she said, “I’m shocked. I didn’t expect to win. There were so many great people in St. Albert who are truly worthy of this.”

In what some considered an upset, the lesser-known visual artist Sierra Wirsch trumped popular singer-songwriter Hailey Benedict. Wirsch it appeared was just as startled as everyone else.

“Honestly I thought I was the last person to get it. I was looking at the others and they were fantastic and really amazing and inspiring. They love what they do.”

The awards ceremony was held at the Enjoy Centre on Thursday.