Reaching out to the homeless with books 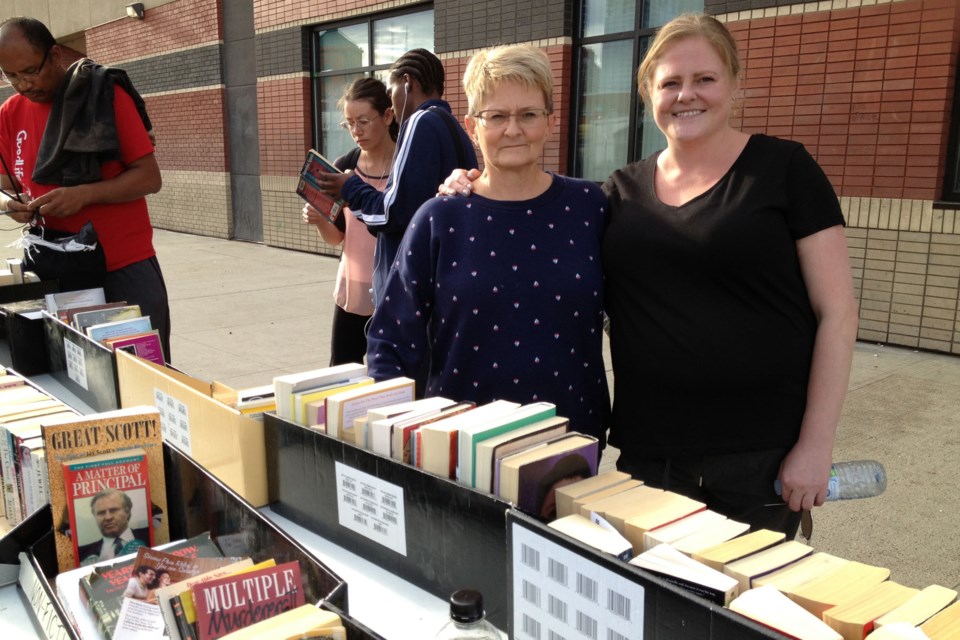 Birni and Renee Tkachuk, a mother-daughter duo known as the Book Babes, man a table of books outside Hope Mission once a week. The books are free for the taking and people are encouraged to pick up a read or two. ANNA BOROWIECKI/St. Albert Gazette

A thin man outside Hope Mission tears bits of bread into small chunks and tosses them to a cluster of pigeons eagerly pecking at the grub. Across Edmonton’s inner city street, half a dozen homeless people have erected makeshift tents from discarded items.

It’s close to 6 p.m. and people who have enjoyed a hearty supper cooked at Hope Mission’s soup kitchen are vacating the premises with nowhere to go.

Normally, the homeless will stand around the street and share a joke or a cigarette. Some sit on the sidewalk waiting for 8 p.m. when Hope Mission reopens its doors and they can claim a bed for the night. Most wander off.

The Book Babes are St. Albert resident Birni Tkachuk and her daughter Renee, both members of Smile Edmonton, a public group of close to 3,400 regional members that drop truckloads of hot food and drinks to Hope Mission every Sunday.

“Smile creates a non-denominational environment where people can connect without feeling judged or feel as if they’re being recruited into a church,” said Renee.

Two years ago, the mother-daughter duo joined forces and set up their first table with about 50 books free to anyone searching for a read. They recognized education as the number one weapon against the cycle of poverty.

“When you have nothing, you’re grasping at anything that can help. Even people who shun a higher power get to a point where the only one to talk to is God. Also, many of us have been close to death and it’s about finding the right path, the right power,” said Renee.

“And when you get sober and you're in rehabilitation programs, all you have is time and there is no escape except reading a book.”

Far from being a Bible thumper, Renee has lived on the streets and travelled down some dark roads. But she managed to escape with the assistance of rehabilitation and family support.

“Reading was my salvation. Reading keeps me clean. Being down here in the neighbourhood reminds me how far I’ve come. And I wanted to give back in a way people weren’t already doing.”

There’s a friendly and sociable vibe floating around the book tables as men and women from every race and ethnicity stop by to flick through the titles. And each person has a narrative.

One of the first to stop at the table is Manfred Gast, 75. The impoverished retiree lives more than 10 blocks away but walks to Hope Mission every day for a meal and a cup of friendship.

“I used to eat books when I was young. I’d read about three books a week and all were about 500-600 pages,” said Gast, a tall slender man sporting a big grin.

He scans the collection and selects a couple of adventure books. Spotting a stack of Hilroy ringed notebooks, Gast politely asks for one. He’s heard the Alberta government plans to cut funding for SAGE, an advocacy organization for seniors and he’s crusading for the organization.

“I want to write a letter to the Alberta government to tell them about SAGE – the way SAGE helped me find my apartment and getting to medical appointments when I had prostate cancer.”

Cristina Alvarez from Mexico is between jobs, but she tries to stay busy. She spotted the books on her way to meet a friend at the Herb Jamieson Chapel and was leafing through a couple of titles.

“I am looking for a job. I have experience in customer service, cleaning and cooking, says Alvarez, who was searching for religious, spiritual and uplifting works to fuel her hope for a better future.

Stef Ashton, a man who marches to his own beat, has travelled across Europe widely and is a philosopher of sorts. Although intrigued by many types of books, his current selections tend towards the bohemian.

When asked what he enjoys about reading, he replies with a laugh, “Well, I was given something between my ears and I may as well use it.”

There is one myth about street people and the homeless that Renee wants to set right.

“A lot of people think the homeless are illiterate. They’re not. They are educated, but they’re just unemployed or they have mental health issues. And most people are just one paycheque away from this.”

While Renee is the boots-to-the-ground source of inspiration, the personal communicator who hugs her clients in an effort to break the no-touch stigma many feel toward street people, Birni is the organizer.

Now retired, Birni was a project coordinator at NAIT’s IT department, and often posted requests for books at the education institute.

“One woman – I don’t know how she heard about me – called and said she had a basement full of books. She wasn’t kidding,” said Birni.

When the mother-daughter duo arrived, the basement was packed and their Mitsubishi SUV was loaded top-to-bottom so much it sagged.

Once again the duo is looking to replenish their collection of books. They are open to accepting all genres of books except children’s books and romances. Notebooks to write letters and envelopes are also gratefully accepted.

There is also a high demand for backpacks, reusable water bottles, jeans, sweatshirts and hoodies.

If you would like to make a donation to Book Babes, email [email protected]