Take a carpet ride to Agrabah 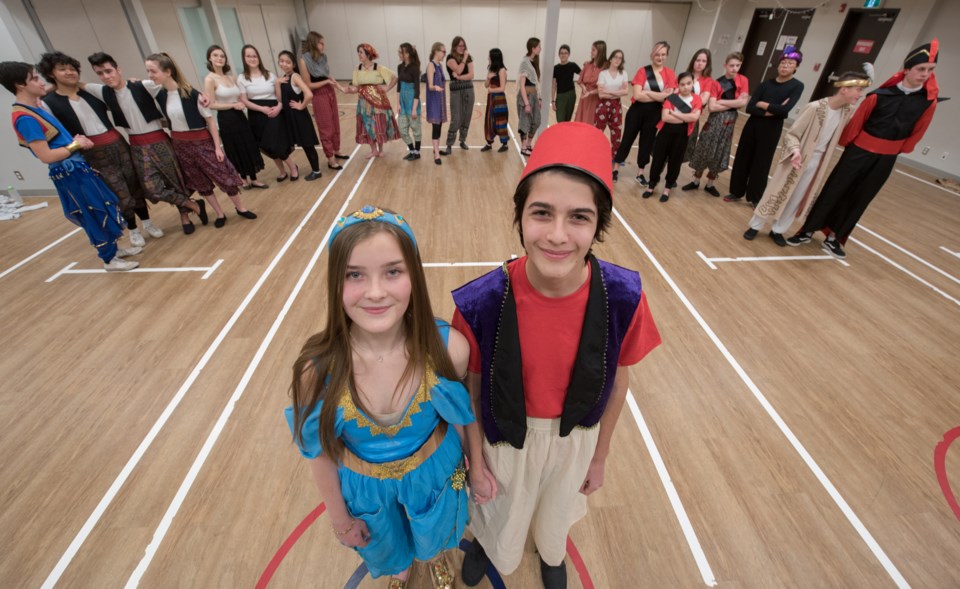 Paige Grout and Matteo Sicolo, both 14, as Jasmine and Aladdin, during a rehearsal for Phoenix Tales Productions production of Aladdin Jr. at Red Willow Place. JOHN LUCAS/St. Albert Gazette

If you’ve seen the Disney Aladdin animation, you’ll have a pretty good idea of the plot for Phoenix Tales' stage production of Aladdin Jr.

The musical adaptation was designed for middle and senior school actors, and Phoenix is performing this mesmerizing tale Feb. 20 to 22 at the Arden Theatre.

Once again, we are whisked to Agrabah, City of Enchantment, where the down-on-his-luck Aladdin meets Princess Jasmine in disguise and discovers a Genie who has the power to grant him three wishes.

He desires to win Jasmine’s respect and affection. But the Genie’s power and Jafar’s boastful ambitions test the street urchin’s will and moral fibre.

Even if you think you are familiar with the magical plot, this version has a few surprises.

“It’s a new show from MCI with new characters and new songs. It adapts to the stage really well and it’s quite funny. What can I say? It’s a classic,” said producer Michael Paruby, who is tasked with keeping the entire team working together seamlessly.

One of the key differences is Aladdin’s pet monkey is replaced with three penniless amigos: Babkak, the food lover; Omar, the nervous kid; and Kassim, the serious one.

“Originally it was more Middle Eastern, but this show has amped up the jazz. The jazz style communicates in a different way. With a live audience it connects better.”

Although jazz music underlines show-stopping numbers such as Friends Like Me, billowy harem pants keep the Arabian influence intact.

Casting was an easy carpet ride for director Justice Matte, a 2019 Bellerose High graduate now studying for a double degree at the University of Alberta.

“We selected Matteo Sicolo as Aladdin. Out of the boys who auditioned, he had the most naturally gifted singing voice and the looks,” said Matte.

“Paige is one of our hardest-working actors. This is her third show with us. She really wanted this role and worked for it. She’s a grounded actor with a good range. And she’s a strong presence on stage.”

Matte describes John Pulis, the Genie, as “very similar to the animation. John is hilarious, a genuinely funny person. He is naturally charismatic and as the Genie, he’s a fun improviser.”

And of course, as Jafar the villain, Cody Parks has an equally robust demeanour.

“He is distinguished and put together. He has a power behind the voice.”

Phoenix Tales typically casts students from grades 7 to 10. This year, the 33-member cast comes from different schools across the city as well as a handful from Edmonton.

“Having five Edmonton actors in our cast is a bonus for us. It means we’re getting noticed,” Paruby said.

“This is classic Disney. It has great choreography, awesome performers and great music.”

For every ticket purchased, patrons receive a $15 gift certificate to Central Social Hall presented at the door.