The Bad Seed is every parent's nightmare 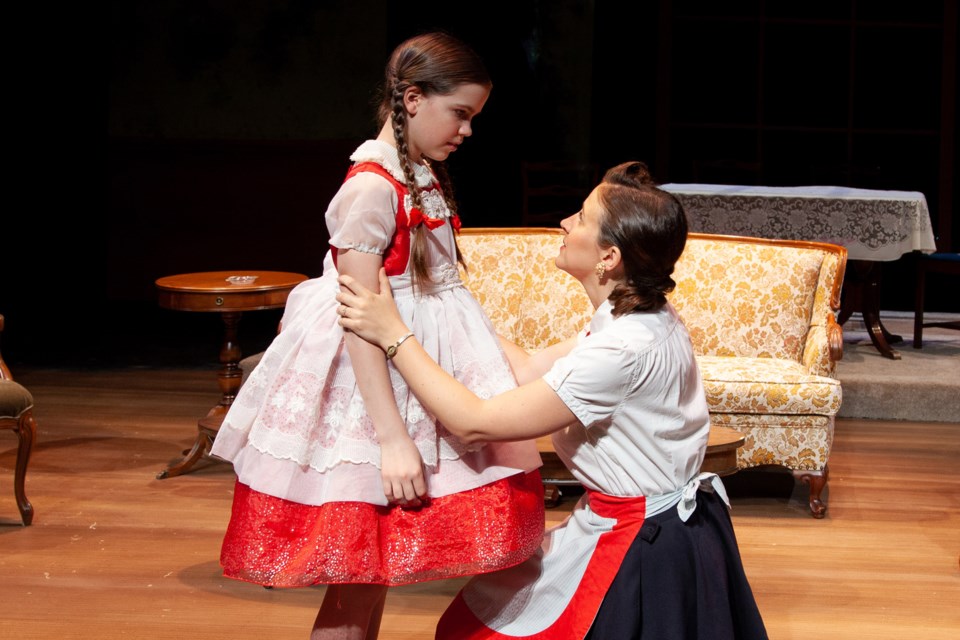 Rhoda (Lilla Sólymos) and her mother Christine (Nicola Elbro) are at loggerheads over a mysterious death in The Bad Seed running at Varscona Theatre until July 27.

Some stories stick in your mind and you wish they’d go away. A few years ago I saw a rerun of an NCIS episode involving Rachel Barnes, a young girl who murders her mother.

It turns out Rachel to all outward appearances looks sweet and innocent. Underneath the surface the pigtailed tween is a cold, emotionless, unfeeling sociopath who discovers her psychiatrist mother is planning to send her to a special institute for therapy.

Unhappy with leaving, Rachel shoots her mother in the back, buries the gun under her fort and lies about evidence. The entire episode gave me chilly goose bumps, especially the last shot of Rachel revealing her true face: cold, remorseless and avenging.

As I sat in the darkened Varscona Theatre watching Teatro La Quindicina’s new production of The Bad Seed, all the same dark emotions came rushing back.

The Bad Seed, a disturbing novel originally penned by William March and adapted by Maxwell Anderson, was probably the inspiration for NCIS's gripping episode.

However, this show has its own surprise twists. In Teatro’s live-action slowburner, a school outing turns tragic when Claude Daigle, a young boy, is discovered drowned in a body of water with apparent injuries to his face and hands.

Suspicion falls on Rhoda Penmark, the play’s driving force. About eight to 10 years old, she is polite, intelligent, glib and eager to please.

But there is nothing guileless about Rhoda, and as the production progresses, her cold and calculating manner, laced with manipulative saccharine smiles, chill you to the bone.

Lilla Sólymos first appears as Rhoda attired in a poufy party dress much like a perfect doll waiting to be unwrapped. Like a plastic doll, she appears perfectly flawless and equally empty.

In reality, Rhoda just mimics the words and actions of others. Stripped of a moral compass, she lacks remorse and understanding. One of the toughest challenges facing an actor is projecting an emotionless character whose personality can shift in the blink of an eye. At such a young age, Sólymos does an incredible job of portraying a high-functioning sociopath.

Christine is living every parent’s nightmare. As bits of evidence gradually pile up, she must face the fact that her daughter may have committed a reprehensible crime.

But Christine is a loving mother and how does she reconcile the bits of community gossip while protecting her daughter? Determined to find answers and do the right thing, Christine looks into her own background and slowly slides into a mental breakdown.

Elbro’s Christine is the epitome of a well-bred stylish upper middle-class housewife and mother. Her fashionable clothing and high heels suggest she rarely scrubs toilets and washes floors.

In fact, Elbro’s Christine exudes fragility and a gentle vulnerability that contrasts so sharply with Rhoda. The Toronto-based actress is beautifully suited to play her character. It is very rare to see a character commit a crime in front of everyone’s eyes and have the audience in complete sympathy with her. Yet Elbro delivers on every level and keeps everyone riveted in his/her seat.

Perhaps the most tragic figure in the play is Hortense Daigle, Claude’s mother. Her son’s unexplained death turns her into a heavy-drinking basket case that appears at the Penmark house desperately searching for answers.

Andrea House delivers a heart-wrenching performance of mother racked with pain at the loss of her child. One of House’s great strengths is playing a drunk woman while maintaining the audience’s sympathies firmly in the palm of her hand.

The eight-actor cast also features Cathy Derkach as Monica, a well-meaning landlady who is obsessed with psychoanalysis.

Mat Busby is the creepy LeRoy, an ominous handyman whose loose mouth gets him into trouble, while Kristi Hansen plays Miss Claudia Fern, a brisk teacher interested in protecting her school’s reputation at all costs.

Raising a child with an inbred talent for homicide is every parent’s nightmare. If you go see The Bad Seed, leave the kids at home.