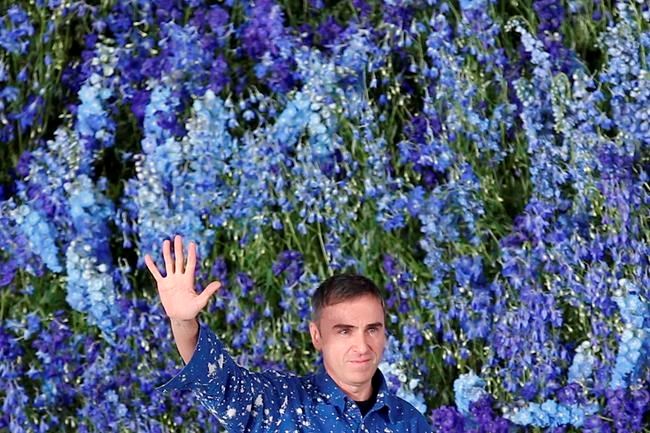 MILAN — Miuccia Prada and Raf Simons — two of the fashion world's biggest creative names — will collaborate on Prada collections from Spring/Summer 2021 going forward indefinitely, the designers announced Sunday at a news conference on the sidelines of Milan Fashion Week.

Prada, who has been the creative force behind one of luxury’s most successful brands for 30 years, said the new partnership didn't signal an eventual succession.

“Don’t make me older than I am,” the 70-year-old designer quipped.

Simons, 52, is considered one of the fashion world’s biggest talents, whose future has been the subject of intense speculation since he left Calvin Klein in 2018. He previously was creative director of Jil Sander and Dior, and also has his own eponymous label, which he said would continue.

Their first collaboration will appear on the September runway for Spring/Summer 2021.

“The contract in theory is forever,” Prada said.

“Maybe this is the first time in fashion history that two expert designers who had their own successes in this sector will work together,” said Patrizio Bertelli, the co-CEO of the Prada Group with his wife, Miuccia Prada.

The announcement came on a day when the new coronavirus was a growing concern around the fashion capital. Giorgio Armani took the unusual step to show his collection behind closed doors to an empty , streaming for the fashion public, as a precaution. The rest of the fashion shows scheduled for Sunday continued as planned. Later Sunday the number of confirmed cases in Italy rose to at least 152 and officials halted the Venice Carnival to try to stop the spread of the virus.

Prada said they went ahead with the announcement despite the growing emergency in Italy — where more cases of the COVID-19 virus have been confirmed than in Hong Kong. She said that the globalized world is becoming ever more complex “and we need to work, also if these ugly and difficult things are happening.”

The designers said that the collaboration was born out of long mutual respect dating from 2005 when Simons took over as creative director of Jil Sander, which was at the time part of the Prada Group.

They both said that the collaboration was also meant as a bulwark against a tendency in the fashion world for creativity to be squelched by business priorities.

“I think a lot of creatives in a lot of positions dealing with independent brands and creative directorships feel troubled, feel like the fashion industry is moving more and more toward an industry that might end up excluding creatives,” Simons said. He specified that in the fashion world there are examples of financial success without a strong creative direction.

“It is definitely something we question, and we do believe that a collaboration between creatives could re-position that aspect of the whole business,” he said.

This story has been corrected to show that the correct title of Patrizio Bertelli is the co-CEO of the Prada Group, not the chairman.