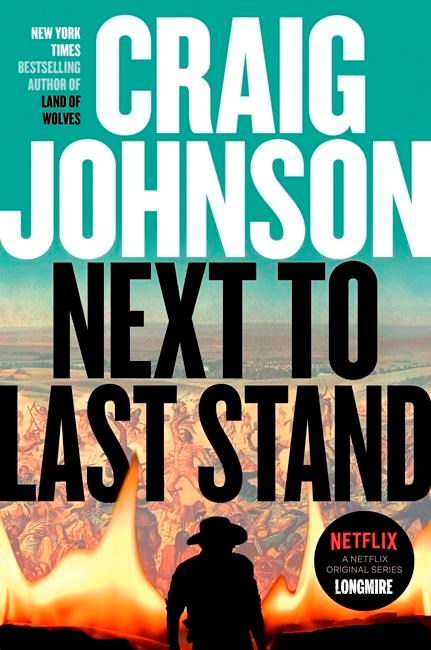 “Next to Last Stand,” by Craig Johnson (Viking)

In “Next to Last Stand,” the 16th book in Craig Johnson’s popular mystery series, Absaroka County Sheriff Walt Longmire is feeling his age. He’s not sure he even wants to stand for reelection. However, a good mystery can always get the veteran lawman’s heart pumping again.

He finds one when the director of the Wyoming Home for Soldiers and Sailors calls to inform him that his pal Charlie Lee Stillwater has passed away — and that he needs to examine what was found in the old man’s room. Arriving there, Longmire sees stacks of papers and file folders, a huge hoard of books about art, a scrap of canvass that appears to be a copy (or perhaps an actual piece) of a famous painting, and a box containing $1 million in hundred dollar bills.

It appears that Charlie died of natural causes, but where did the long-penniless old soldier get a million dollars in cash? When did he develop an apparent obsession with art? And is that scrap of canvass a clue or a red herring?

Johnson builds his story around a real work of art: “Custer’s Last Fight,” a not particularly good and historically inaccurate painting of the battle of Little Big Horn that was destroyed in a fire in 1946 at the U.S. Army’s 7th Cavalry Headquarters in Fort Bliss, Texas. However, because millions of copies were distributed by Anheuser-Bush, it is one of the most well-known art works in American history. The original would be worth millions.

Could it have somehow survived the fire? The plot thickens when Longmire discovers that his old pal had been stationed at the Texas army post at the time of the fire.

Fans of the Longmire series will be pleased that many familiar characters, including stoic Henry Standing Bear and crude-talking Deputy Sheriff Victoria Moretti, play a prominent role in the tale that also involves a crooked art dealer, a art forger, some Russian art collectors, and an assortment of violent thugs.

Johnson excels at introducing his series characters to new readers without boring longtime fans with details they already know. The plot is not as dark as the last few Longmire tales, but as always, a suspenseful one unfolds at an appealing pace and the prose is first rate.

Bruce DeSilva, winner of the Mystery Writers of America’s Edgar Award, is the author of the Mulligan crime novels including “The Dread Line.”