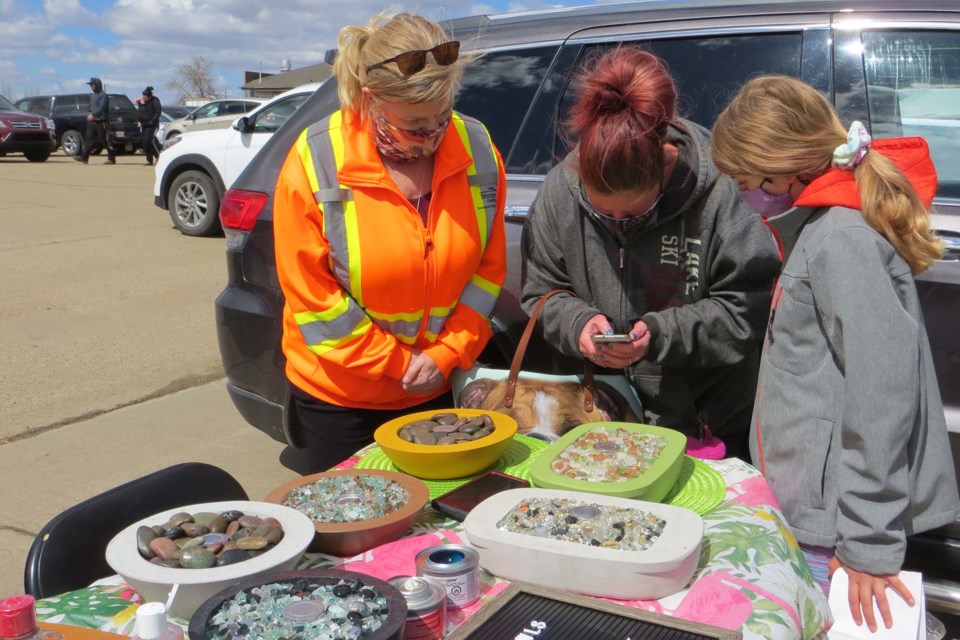 Morinville Farmers’ Market vendors are quite used to the season’s weekly volatile weather conditions. However, most vendors who set up booths at the 2021 opening on May 2 were hoping for sunny weather. Instead, they navigated cool 10-degree temperatures and blustery north winds that rattled tents.

Despite those temperatures, organizers opted to launch the market one month earlier than in past years due to the pandemic’s effect on vendors’ bottom lines.

“We opened early because we had to cancel our Christmas and Easter craft fairs and we knew vendors were hurting financially. We are very vendor friendly and kept our market prices at a reasonable $20, and we met them halfway,” said market manager Christine Mercier who worked closely with Morinville Chamber of Commerce.

In spite of less-than-ideal weather conditions, 29 vendors, two food trucks and more than 400 shoppers, some who rarely visited in the past, descended on the outdoor market outside the Rendez-Vous Centre creating an upbeat and welcoming mood.

“Our response was brilliant. We had a full turnout of 29 vendors and a good crowd. We were very surprised and very well supported. It can take a while for people to get to know we’re here, but we got people from all corners of the province and all walks of life,” Mercier said.

Many vendors sold more than one craft, and for a small market, the diversity was extensive. It ranged from quilts, jewelry, casual clothes, soaps and skincare products to birdhouses, wood toys, boutique cutting boards, glass decorations, stonework and plants.

And for food browsers, Jamaican patties, home baking, perogies, jams, meat products and dog treats were sold. The only thing missing were fruits and vegetables due to arrive in June.

One new attention-grabbing booth, run by Donna Thompson of Namao, glittered with concrete tabletop fire bowls. The artisan makes the concrete bowls, decorates them with glass chips or rocks for use indoors or outdoors.

Amber Paul and her daughter Isabella from Edmonton attended the market initially to support an aunt and uncle selling glass ornaments.

“I’m a farmers’ market addict. There are so many goodies at a market, and I love finding unique things,” said Paul.

“And these are shiny and gorgeous,” added Isabella pointing to her favourite fire bowl. Needing little persuasion, Paul purchased two – one for her aunt and another for herself as a Mother's Day gift.

Thompson first dipped her toe into the Morinville market in 2020 to gauge crowd response to the fire bowls and was pleased with the result.

“I like meeting people, seeing new faces. I spent a lot of time behind four walls this year. It’s nice to get out,” she said.

“It’s Sunday and with COVID, there is so little we can do and this was something we could do,” said Jim.

Jane added, “It’s not too far from home and it’s on a small scale. I’ve gone to the St. Albert Farmers’ Market and found it overwhelming.”

Although there were multiple reasons for people attending the market, most were attracted to the embracing small-town ambiance.

Thompson explained it best saying, “It’s like a small, close-knit family. Everyone is friendly and welcoming.”