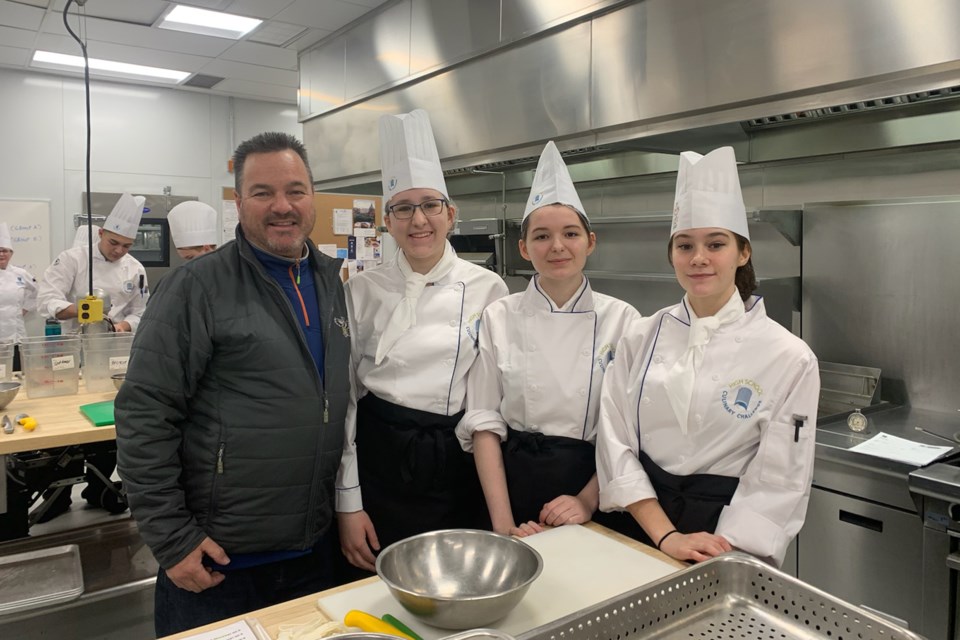 Some scholarships are as simple as filling out a form online. For aspiring chef Alicia Hill, it meant sweating it out in NAIT’s pressure-cooker labs competing in the 2020 High School Culinary Challenge.

The Grade 12 Paul Kane Student competed along with 18 other schools in the greater Edmonton Area. Her two teammates were Grade 10 students Seanna Kryger and Anke Jacobs.

Any student competing in the challenge was eligible to apply for one of four NAIT culinary scholarships. At a gala dinner where recipients were announced, Hill was stunned to hear her name.

“At first I thought, ‘Is this real?’ And then I went up on stage. To this day I’m still speechless. I’m so excited about it,” said Hill who was also presented with a Victorinox knife set.

She plans to enrol in a three-year apprenticeship program. The scholarship pays for tuition, books and chef whites.

Randy Kozak, head of Paul Kane’s apprenticeship program, said this of Hill: “The best thing I can say about Alicia is that between her hard work ethic and willingness to learn she has done very well for herself. In getting ready for the competition, Alicia has soaked things up like a sponge. Often times I would only go through something once and she would get it. It is very exciting to see the smile on her face when she talks about the industry as well as the scholarship.”

Hill’s formative years were spent growing up on a family farm near Olds that housed three generations.

“From the time I could walk ‘til about the second or third grade, I helped my great-uncle plant a garden – corn, potatoes, carrots, squash.”

The next step was learning to cook the veggies and Hill discovered a previously untapped passion. Everything was homemade.

“I didn’t even know there was boxed pancake mix until I was at a friend’s house.”

The culinary challenge required each team to cook three courses: a minestrone soup, a savoury salmon and shrimp stir-fry followed by a sweet rhubarb tart with a streusel topping.

“It was new and exciting and there was something I could learn from it. I have a competitive side and it was really cool.”

Looking to the future, Hill would ideally enjoy working at a hotel in Japer or Banff.

“I’d love to work at big hotel. So many different kinds of food come through, and people are great when a team works together. Jasper and Banff are gorgeous and I love the atmosphere.

Dancers strip from homes when pandemic prompts cancellation of burlesque show
Mar 23, 2020 8:48 AM