Photographer, painter and writer Linda Finstad is doubling down efforts to share her art
Jul 10, 2020 9:00 AM By: Anna Borowiecki 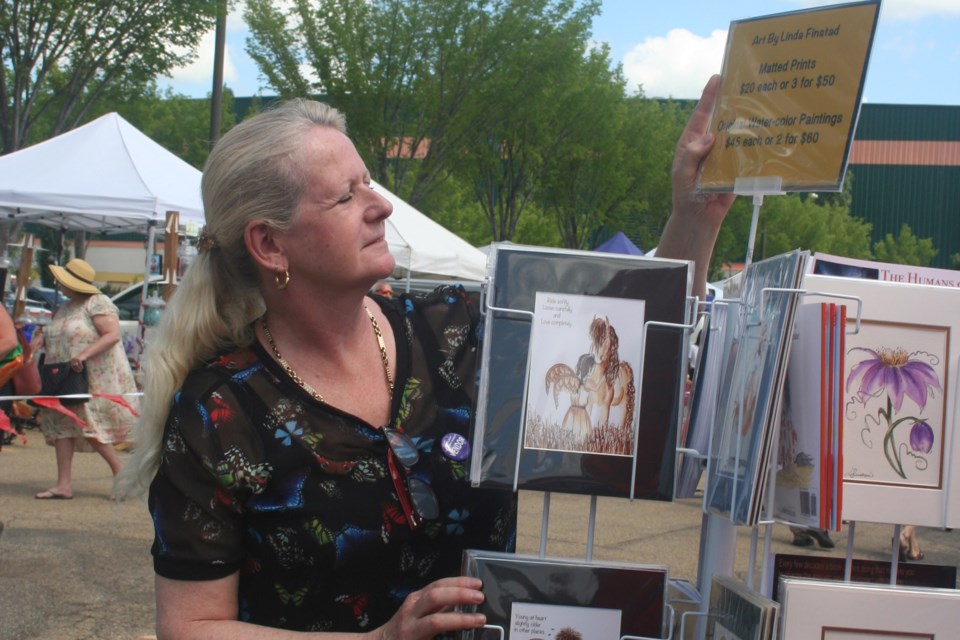 There was a time when farmers markets were limited to simple homemade goods such as eggs, vegetables, butter, knitted wear and woodworking.

Today, the field has expanded broadly, and Linda Finstad’s energetic and cheeky paintings, photography, books and cards are proof of that.

Her booth at St. Albert Farmers’ Market showcases an artistic evolution of different styles and mediums across nearly two decades of development.

But after fashioning trendy headgear for more than 10 years, Finstad decided to shift gears in a fresh direction. She pivoted to photography and made horse show photography her specialty for 15 years.

“I was booked solid at outdoor shows from April to October. If there was another one of me, I could have triple-booked,” laughed Finstad.

Some of those stunning images are on display at the booth and there is very much a “wow” to them.

“My pictures had to have a ‘holy crap’ value to them, because if they didn’t, people could do it themselves.”

Adding value to an already illustrious roster of images, Finstad also incorporated some of the photographs into eight paperback books she wrote. They include "How to De-Code Equine Body Language," "The Humans of Horse Racing" and "The Cowboy’s Trail to Salvation."

“But cell phones killed my job. People only wanted to take their own digital photographs. I saw the writing on the wall five years ago.”

“But I’m happy I got a chance to develop that talent, because now I turn it into books, cards, prints and magnets.”

Finstad's love of equines emerged when she started riding at four years. She took her passion to the high-level instructing dressage for the British Horse Society.

She met Canadian husband, Tom Finstad, at the holiday town Blackpool during a snooker championship. Tom is a three-time winner of the Canadian Open Snooker Championships and was in Britain to take part in a tournament.

The young couple met at a pub, and within three days he proposed.

“I think I replied, saying, ‘That’s the best offer I’ve had all week.’ And we’ve been married 30 years.”

During her painting career, Finstad developed a style of depicting horses she dubs “Prism-equus.” The paintings are characterized by a series of traditional and Christian symbols cleverly linked together to visualize a horse’s personality.

She since branched out, painting 100 whimsical, often-scraggly chickens complete with breezy quips that were put into a book titled "Chicken Wisdom."

At the onset of COVID’s lockdown, Finstad started painting angels.

“They’re not your typical Christmas card angels. They’re chubby with big buns and frizzy hair. Every day, I posted an angel on the Internet, and they’ve been really popular. They represent everyday people doing everyday things.”

But at the beginning of the pandemic, Finstad ran out of paint. Ever resourceful, she adapted using coffee and red Tremclad paint located in the garage.

“I have three different shades and I can create anything I want."

“There are new opportunities that have come from the pandemic. We have to think about the new normal, the future, and not look back.”