It’s no small feat for the Kinette Club of St. Albert to produce the annual Christmas Hamper campaign. They've been doing it for 53 years, too.
Dec 1, 2019 2:00 PM By: Scott Hayes 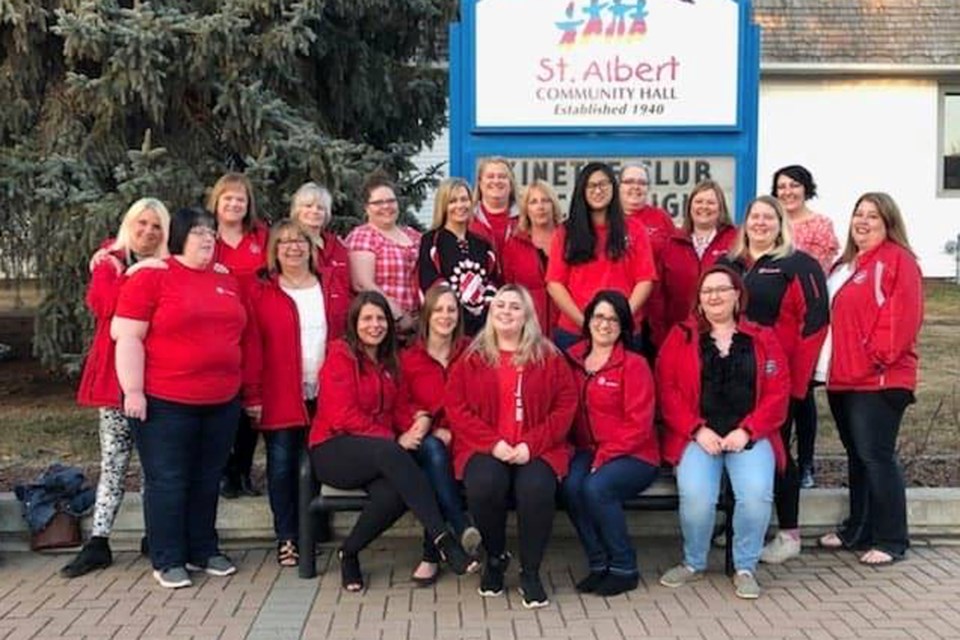 It’s no small feat for the Kinette Club of St. Albert to produce the annual Christmas Hamper campaign. Think of the multiple donation boxes around the city, the logistics of the sorting and the compiling of toys and food items, not to mention the wrapping and mass delivery of hundreds of the joyous hampers themselves, all during the already frantic and frazzled month of December. For that alone, the Kinettes are civic champions.

Now multiply all that work by 53 and then divide by 23.

This is the 53rd year that the service club is conducting its Christmas Hamper campaign to collect gifts and goods for approximately 350 local families that would otherwise go wanting on the special day. It sounds like the kind of effort that would take an army to co-ordinate. It’s a hearty army for certain, but one that derives its great strength from some relatively small numbers.

“We're 23 members strong, so we’re definitely increasing, but we're always looking for more,” stated club president Julie DeMott, gently suggesting the task ahead is equally as rewarding as it is ever-so-tiresome.

No one has ever called out a Kinette for having a lack of energy.

If you thought that the Christmas Hamper campaign was proof enough, they bounce right back in the new year to continue raising money to support a full roster of other worthy community causes. While those hundreds of local families thank the Kinettes for the surprise stocking stuffers, the Kinettes are out there again working to help the St. Albert Food Bank, the Salvation Army, STARS Air Ambulances, the Cystic Fibrosis Foundation, the Multiple Sclerosis Society, Camp He Ho Ha, the Stollery Children’s Hospital and many others.

“There’s more than 20 different charities that we donate to. It all depends on how our year is,” DeMott continued. “We need ways to raise money so we can give to them as well.”

The Christmas Hamper campaign recently kicked off with a foot-stompin' gala event at LB's Pub, bringing in approximately $8,000 for the cause including their most successful silent auction ever. Look for their spring fiesta called One Rockin’ Night to return in April 2020 to help the Kinettes with their other community supports throughout the year. The aptly-titled event really is a dance party and it holds the community right there at its heart. But that’s still months off. Right now, they’re firmly locked into the festive season leading up to Dec. 25. They have lots on the go and their wish list is comparably large.

In recent years, they’ve struggled to find a space large enough for them to use as a home base for the six weeks of the hamper campaign. This year, they were graciously offered two smaller spaces at first but a public plea for help brought in the much-needed relief just this week. Originally, the City of St. Albert had offered them the space where the old Source for Sports was inside of Servus Place, while Canada West donated other space at 215 Carnegie Dr., said the Kinettes’ public relations manager Natasha Lefebvre. She gratefully thanked both organizations for their gracious earlier offers but they just weren't as big as they needed or as versatile either.

That's when Dr. Mark Knoefel of Oasis Orthodontics and his wife and Line Knoefel stepped in with more appropriately sized space with a building they own in northwest Edmonton near 137 Avenue. Lefebvre made a public plea for 10,000 sq. ft. in an article in last Saturday's edition of the paper. The Knoefels read the story and contacted her soon after, though she originally balked at the location they were offering simply because it was outside of St. Albert.

"I actually originally said no to the space because it was too far in Edmonton and they were like, ‘Just come take a look at it. If it doesn't work for you, then no hard feelings whatever.’ So we went and looked and we were like, ‘Yeah, this is amazing. We’ll take it,'" Lefebvre said. "It's insane. Their orthodontics location is upstairs in the building and then they still just have this dentist on the bottom. The rest of the building is just empty. Well, they gave us the rest of the building. They gave us possession super quick. I met with her on Tuesday, and I'm going to pick up the keys on Friday."

She profusely thanked the couple, calling them 'angels'.

"It always seems to just work out for hampers. There's this one thing that is always certain: it's always hamper and a miracle pulling through every year."

With that home base in place, they can now focus on the regular collection of food and toys from their roster of drop-off points across St. Albert. The group has lined up Servus Place, Fountain Park Recreation Centre, Overdrive Dance Force, Raw Beauty, all five Starbucks locations in the city, the Running Room, both A&W locations, BMO, Riverside Honda, Keenooshayo and Robert Rundle schools, Marshalls, and St. Albert Centre for drop-off locations with collections continuing until Saturday, Dec. 14.

Donations right now are about average, she noted.

"They're about average, but it's hard to tell until we actually do Fill-A-Bus. This year, we're actually doing it a week earlier than we usually do. It's gonna be a lot easier if we are in panic mode. We're going to have a full week to panic instead of a few days so it's really nice."

This year, their big push is to get more donations of gift cards.

“The reason we're doing that is this year, all the referrals we get in, it's going to have the exact toy that that child wants. If we don't get those donated, we're going to use the gift cards to either go out and buy the toy or give the gift cards to the bigger families that need more food,” Lefebvre explained.

Those gift cards can be dropped off at Fire Hall #3 at 100 Giroux Rd. Cash and cheques will be accepted there as well. Cheques can also be mailed to the following address:

Tax receipts will be offered for donations of $20 or greater.

The Kinettes are now fully ready to run their 18th annual Fill-a-Bus event at spots all across the city on Saturday, Nov. 30. The event (co-hosted by Pacific Western Transportation and St. Albert Transit) will see city buses stationed from 9 a.m. to 3 p.m. at numerous convenient shopping destinations so that consumers can drop off donations of non-perishable food and toys to help support the service club’s annual Christmas Hamper campaign.

Look for the buses at the Real Canadian Superstore, both Safeway locations, both Save-On-Foods locations, Sobeys, and at Walmart.

Exactly one week after that, families can line up for the ever-popular Santa’s Breakfast located at the Kinsmen Banquet Centre. It starts at 9 a.m. on Saturday, Dec. 7, and tickets are $10 each.

“We are hoping to have twice as many people because it sold out so quickly last year,” club president Julie DeMott noted.

There are still many tickets available and they've adjusted the seating in the space to accommodate as many people as possible. Tickets are available on EventBrite.

Their fingers are certainly crossed to have the community’s support. She added they usually support 300 families or more during the annual campaign but they’ve already started receiving a lot of referrals, which is an unusually early occurrence.

Lefebvre says, “no sweat,” remembering how realtor Brian Cyr stepped in at the last minute to play Christmas angel with thousands of dollars in gifts to help fill in empty hampers in 2018.

“That's what I tell people. People in the group freaked out and I'm like, ‘You guys need to calm down. Every year we get our Christmas miracle.’ Somehow it happens you know, though last year was definitely cutting it very close.”

“We're just excited to support St. Albert in whatever way we can and feed as many amazing families that we can. Hopefully, we’ll have the sponsorship that we need and a successful silent auction and Santa’s breakfast and everything can come together just smooth as butter.”

Hampers get delivered on Sunday, Dec. 15 this year.

For more information on the Kinettes or the Christmas Hamper campaign or any of these related events, call 780-666-6655, email [email protected], or visit stalbertkinettes.ca.