The St. Albert Public Library has a modified version of its ever-popular summer reading program lined up. The all-ages Escape the Labyrinth starts up on Monday.
Jun 27, 2020 2:00 PM By: Scott Hayes 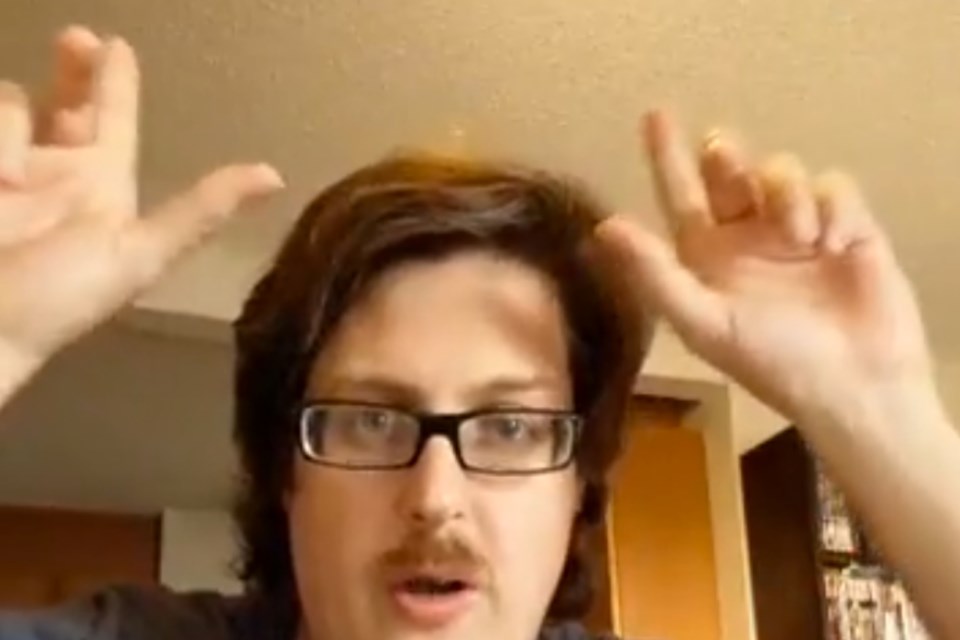 Children's programmer Drew Thomas demonstrates what a Minotaur looks like with the horns of a bull during a Facebook Live video on Thursday evening. He was explaining the premise of the upcoming Summer Reading Game called Escape the Labyrinth. The all-ages online-only game starts up on Monday.

A corn maze becomes a labyrinth that you have to read your way out of in the St. Albert Public Library’s new children’s Summer Reading Game. Aptly titled Escape the Labyrinth, the action starts up on Monday in an adapted online version only for library patrons.

Children's programmer Drew Thomas explained the setup in a live Facebook video on Thursday evening. It starts off by sounding like every corn maze experience everyone has ever had, but soon becomes downright mythological.

“As you're walking through this maze, something starts happening: it starts changing. The corn maze starts to turn into bricks and walls. Before you know what's going on, this giant creature appears. He has the head of a bull and the tail of a bull but the body of a man. He says, ‘I am the Minotaur and this is the labyrinth.’”

The Minotaur explains the only way that you can escape is if he sends you out with his magic, but you have to earn his help by participating in a quest through the labyrinth to collect seven magical items. You get to choose a fantasy companion for the adventure, too. There’s Bugles the miniature flying golden elephant, Fizz the unicorn, and Mika the earth golem.

The game starts on Monday when the first chapter is released. A new chapter of the adventure comes out on the following seven Mondays for those who want to follow along.

“Every week, a new adventure is going to come out and we are going to tell the story to you. We're going to be reading them to you. This could be like an audiobook, but there's also going to be an option where you can download the text version and you can read it like a story,” Thomas continued.

“One of the ways we wanted to make sure the game stayed the same is that there will be eight turns. The first seven turns are awesome.”

The turns include the Golden City, Beast Park, the Mysterious Gardens, the Wizard’s Tower, the Sphinx’s Lair, Atlantis, the Centaur’s Carnival, and “everyone's favorite," Thomas said, the Final Room.

The game is geared for kids five to 12. Registration can be found on the library’s programming page at sapl.libcal.com. Instead of a take-home booklet for participants, the game’s page on the library’s website will offer game sheets with activities and a way to track your progress through the adventure.